The world’s largest organisation on inflammation research has named Full Professor Catherine Godson as the recipient of its 2019 Women in Science award.

The UCD researcher received the honour for her outstanding career in the field of inflammation and for helping the scientific advancement of women scientists in the field.

Her research contributions include the discovery that lipoxins, endogenously generated lipid mediators, promote the resolution of inflammation.

“For many years we’ve known the signals that start inflammation and these are what we really target when we take anti-inflammatory drugs,” Professor Godson said, speaking of her research.

“Inflammation is an important way the body defends itself so of course there’s the possibility if you take anti-inflammatory drugs you could compromise the body’s ability to defend itself… we are now developing a shift away from conventional therapy to drugs that mimic how the body itself resolves inflammation.”

Professor Godson will be presented with the award at the International Association of Inflammation Societies’ (IAIS) 14th World Congress on Inflammation conference, where she will present a special lecture as part of the ceremony. 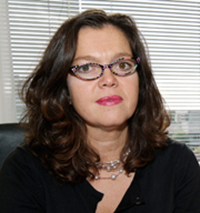 An international body created in 1989 to promote deeper cooperative between national inflammation societies, IAIS recognises two outstanding researchers in the field at its biennial conferences – Women in Science and Lifetime Achievement.

All IAIS members are encouraged to propose potential awardees to the Executive Committee of the international body, and awardees are approved by a steering committee representing each of the IAIS’ member societies.

"I am delighted to accept this award that acknowledges our contributions in an international context on behalf of the members of my lab past and present, our supportive colleagues in The Conway Institute and UCD , our collaborators and the generous and inspiring mentors that I have met along the way,” said Professor Godson.

“It is very satisfying to be recognised for promoting career development of more junior researchers. This is really critical to sustain the progress that we have made in research nationally in relatively recent times.”

A biochemistry graduate from University College Dublin, Professor Godson is the Director of UCD Diabetes Complications Research Centre, and the University’s Professor of Molecular Medicine.

She received her PhD in pharmacology from UCD before travelling to Geneva and San Diego to complete postdoctoral fellowships, thereafter joining the faculty of Harvard University.

Authored or co-authored of over 150 research papers, review articles, patents and book chapters, Professor Godson, together with colleagues at UCD and The Mater University Hospital, identified several novel mediators of progression and potential regression in diabetic kidney disease.

She was elected a member of The Royal Irish Academy in 2011 and recently served as Chair to the RIA Life and Medical Sciences Committee.