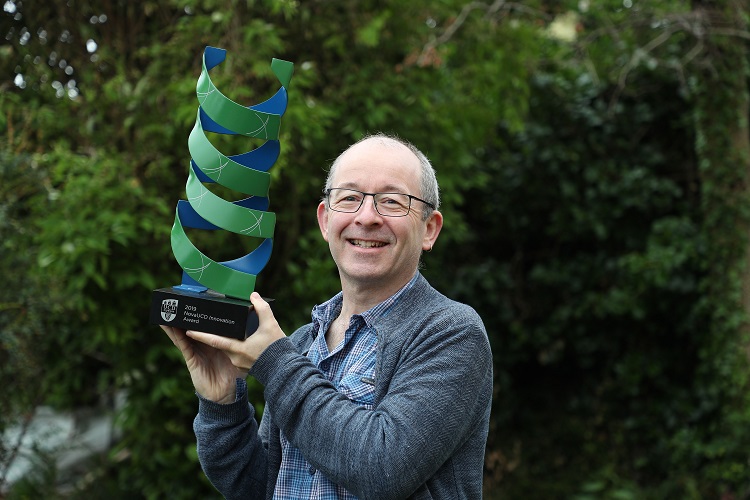 A researcher who pioneered the development of a lab-scale SXT microscope has won the 2019 NovaUCD Innovation Award.

Dr Fergal O'Reilly, of the UCD School of Physics, was presented with the award in a virtual ceremony for his work on soft x-ray-research.

The NovaUCD Innovation Award, established in 2004, is presented annually in recognition of excellence in innovation or of success achieved in the commercialisation of UCD research or other intellectual activity.

Receiving the award, Dr O'Reilly said he was “extraordinarily lucky to be part of a group of colleagues in the UCD Spectroscopy Group, UCD School of Physics and in UCD generally who make our combined efforts in soft x-ray research such a productive pleasure.”

“I am so privileged to be able to contribute to the great team at SiriusXT who are developing critical imaging tools that will unpick biological mysteries that impact us all.

“Finally and fundamentally I would like to acknowledge the huge ongoing support I receive from my family.”

Based research activities on soft x-rays and liquid optics over a near 10-year period carried out at UCD, the company created the first commercial lab-based soft x-ray microscope - which can produce high resolution 3D images of cells and tissue that cannot be produced any other way.

The illumination required for a soft x-ray microscope is currently only available at four football-stadium sized facilities, called synchrotrons, and scientists have to wait up to 12 months for access.

Recently the UCD spin-out received €4.5 million in EU funding as part of the European Innovation Council Accelerator Pilot programme, which is part of Horizon 2020.

A total of seven winners for the 2019 Innovation Award were announced, each representing a success in a number of areas such as commercialisation, consultancy, entrepreneurship and the promotion of an innovation culture by members of the UCD community.

Professor Orla Feely, UCD Vice-President for Research, Innovation and Impact said the Innovation Awards “were established to recognise and highlight the successes being made by members of our research and entrepreneurial community across the University.

“I wish them all continuing success in the years ahead as they continue to deliver impact for the economy and society through their commercialisation, consultancy, entrepreneurial and innovation activities.”

The recipient of the 2019 NovaUCD Invention of the Year Award is Professor Madeleine Lowery, from the UCD School of Electronic and Electrical Engineering.

Professor Lowery received the Award for her Handalysis invention, a new approach to rate the decline in motor function for neuro-degenerative disorders such as Parkinson’s and Huntington’s disease.

The recipient of the 2019 NovaUCD Spin-out of the Year Award was Output Sports, which has developed an end-to-end solution testing multiple components of athletic performance and track training programmes using a single wearable sensor.

They were presented with this award for a consultancy study commissioned by Toyota Ireland, through ConsultUCD, to investigate the energy behaviour of the Toyota Prius IV hybrid vehicle.

The recipient of the 2019 NovaUCD Founder of the Year Award is Bobby Healy, founder and CEO of Manna, the drone delivery ‘as-a-service’ company, who in 2019 closed a €4.6 million seed funding round, led by US-based Dynamo VC.

The recipients of the 2019 NovaUCD Licence of the Year Award were Professor Eoin Casey and Dr Eoin Syron, UCD School of Chemical and Bioprocess Engineering and Dr Barry Heffernan for the licensing of the Membrane Aerated Biofilm Reactor (MABR) technology to OxyMem.

In December 2019 DuPont announced that it had exercised its option to acquire full ownership of the company, a significant milestone for the company and only 6-years since the MABR technology was licenced by the University to OxyMem.