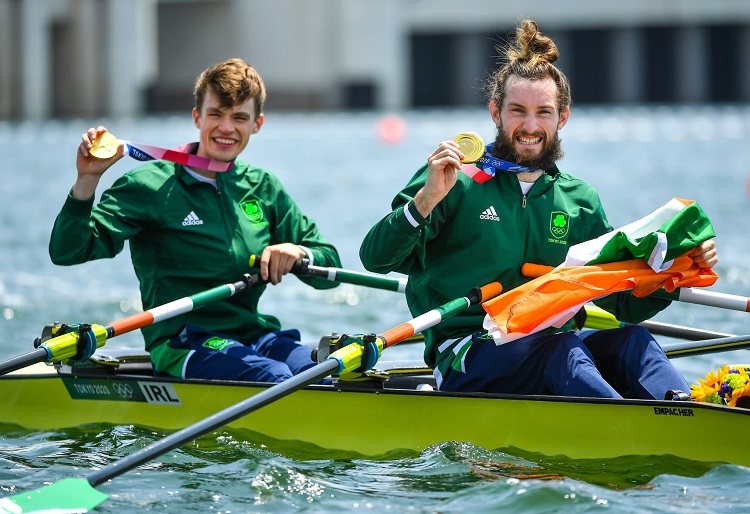 The Skibbereen pair powered to victory at the Sea Forest Waterway in the Men’s Lightweight Double Sculls, edging out a competitive Germany by half a boat length, and leaving Italy finishing a distant third.

"The race plan we had, we do it all the time and it seems to work out okay for us," Paul said, speaking to RTÉ Sport after the race.

"We kind of know that Italy and Germany always go hard, you can count on that. Then they slow down a bit. Once we were catching up to them, we knew that we were at a sustainable pace and kept going. Germany made it hard for us, that's for sure.

While you were sleeping…

Rowers Paul O’Donovan and Fintan McCarthy stormed home to GOLD when they edged a thrilling Lightweight Men’s Double Final in 6:06.43

"I don’t really think about medals at all. We are just here trying to be the best we can be and hopefully, that will be the best of them. Today it was. We are pleased with it.

"You don’t really take in the history of the moment. You’d be well tired after the race."

A silver medallist at Rio in 2016, Cork native Paul is a graduate from the UCD School of Public Health Physiotherapy and Sports Science and a former UCD Ad Astra Elite Sports schola.

His victory comes a day after fellow UCD Ad Astra alumna Eimear Lambe won Ireland's first medal of the Tokyo Olympics with a bronze for the Women’s Rowing Four,

The welcome and love for @TeamIreland rowing gold medallists Fintan McCarthy and Paul O’Donovan as they return to the Olympic village pic.twitter.com/UaXU2ivwLl

President Michael D Higgins sent a message of congratulations to the gold medallists, writing on Twitter: "After the magnificent success in women's rowing yesterday, today we celebrate Ireland's first Olympic gold medal in rowing, won so deservedly by Paul O'Donovan and Fintan McCarthy in the lightweight double sculls.

"Theirs is a tremendous achievement, which gives great inspiration to young people and aspiring athletes all over Ireland."