“I am in double trouble, mental and material” – James Joyce calls for help in private letter

In a 1904 letter to his close friend and supporter C.P. Curran, James Joyce writes:

I am in double trouble, mental and material. Can you meet me tomorrow at half past four at smoke room in Bewley's in West-Moreland Street?

The private letter is one of two Joyce sent to his close friend and supporter C.P. Curran, both of whom graduated from University College Dublin in 1902, seeking help and an empathetic ear during his plight as a writer.

The correspondences have been acquired by UCD, and added to its archival collection of James Joyce materials.

A postcard written by Joyce’s younger brother, Stanislaus Joyce to C.P. Curran in 1907 to tell of the great writer’s “severe attack of rheumatic fever and inflammation of the eyes” has also been acquired by the University.

In the second private letter written by Joyce to Curran in 1917 while he was in Zurich working on Ulysses, the writer describes how he is “recovering from a painful — and this time dangerous — illness of the eyes…”

The new home at UCD Special Collections for the private correspondence between the two lifelong friends, which had been held in safekeeping by the Curran family since they were first written, is most fitting because Joyce (1882-1941) and Curran (1883-1972) first met and quickly became close friends while studying at the Dublin university.

“We urge people to explore these fascinating letters on the UCD Digital Library, and to see for themselves Joyce’s thoughts and words in his own handwriting” said Dr Sandra Collins, UCD University Librarian.

“People can also come and visit the exhibition in the James Joyce Library in UCD and enjoy the illuminating literary networks that formed such an important part of the fabric of society during revolutionary times in Ireland,” she added.

Curran, a lawyer and historian of 18th century Dublin architecture, sculpture and plasterwork, with a life-long interest in art and literature was to become a great supporter of Joyce throughout his writing career.

He also knew other early 20th Century Irish writers including W.B. Yeats, James Stephens and Padraic Colum. His legal career saw him rise to the post of Registrar of the Supreme Court before his retirement in 1953. Curran married the actress, costumier, teacher, and suffragist, Helen Laird (1874-1957) in December 1913.

With the blending of their social circles a vibrant and diverse group of artists, historians, playwrights, actorsactors, and writers were brought together with the couple at its centre. It was through Laird that Curran first met AE (George Russell) with whom he would have a close friendship until Russell’s death in 1935.

Their group found an outlet in the couple’s famed weekly salons, held every Wednesday afternoon at their home at 42 Garville Avenue, Rathgar.

Curran was a model for the character Gabriel in James Joyce’s “The Dead”. He is also mentioned by name in Ulysses, where Stephen Dedalus recalls that he owes him ten guineas.

The iconic 1904 portrait of Joyce standing with hands in pockets, in front of a greenhouse, staring directly into the camera lens was taken by Curran in his family’s back garden at 6 Cumberland Place on the North Circular Road, Dublin. 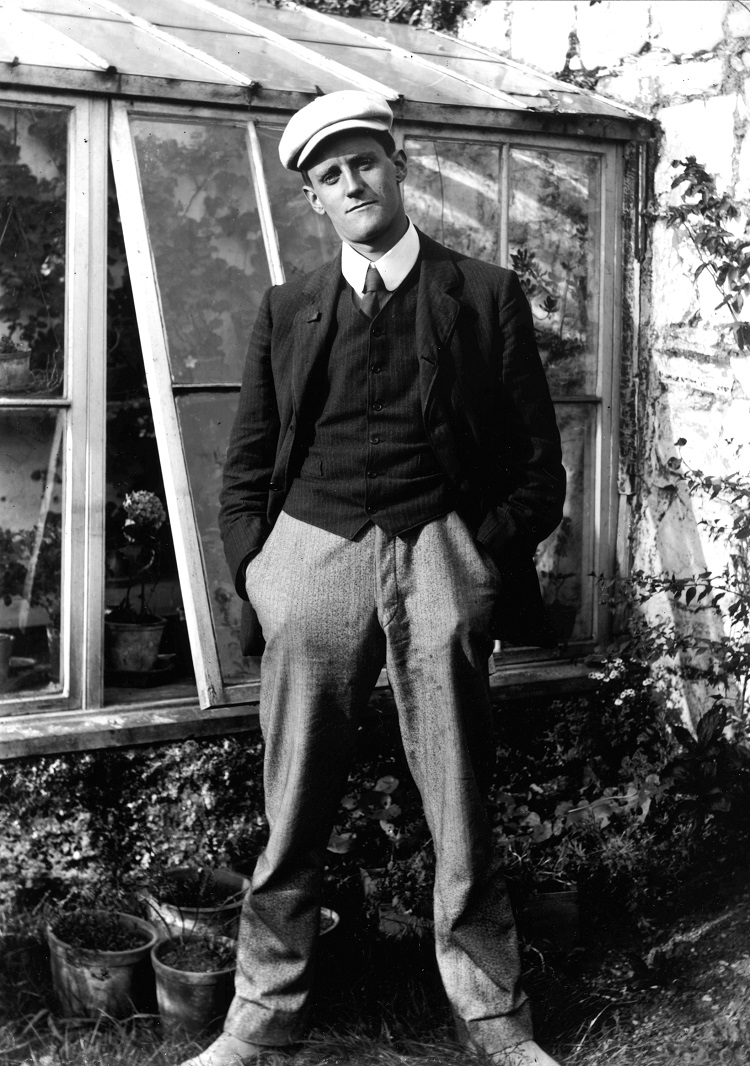 In 1968, Curran summed up his life-long companionship with Joyce in his book: James Joyce Remembered.

The newly acquired Joyce letters and postcard have been included into an exhibition entitled Revolutionary Dublin’s Literary Networks at UCD Special Collections.

The original collection was acquired by UCD in 1971, and includes over 400 letters of correspondence, 130 of these letters relate to Joyce in that they are either written by him to Curran or they are from associates of Joyce and his family.

This collection is the core James Joyce archival collection within UCD and includes 23 letters written by Joyce to Curran. Other letters within the collection offer an insight into how people like Curran and his wife Helen Laird communicated with Lucia Joyce, Stanislaus Joyce, Harriet Shaw Weaver, Sylvia Beach and Paul Leon in order to support Joyce and his family over the course of decades.

This collection is a critical resource for Joyce scholars throughout the world.

The letters have been catalogued and placed within an acid free box which is kept in an environmentally controlled storage area adjacent to the Special Collections reading room within UCD Library.

In this box, the temperature and relative humidity is kept at a constant level to ensure the letters will be preserved for future generations.

All the James Joyce related Curran Laird letters, including the three new acquisitions are available to view on the UCD Digital Library.