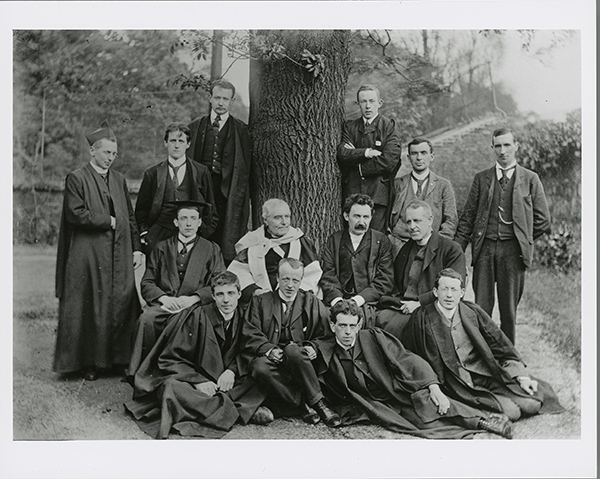 Constantine Curran (1883-1972) was a lawyer and historian of 18th Century Dublin architecture, sculpture and plasterwork. He also held a life-long interest in art and literature. Curran was educated at CBS O'Connell School on North Richmond Street, where he became friends with Tom Kettle. Later he attended UCD where he graduated BA (1902) and MA (1906). It was at UCD that Curran first met James Joyce, with whom he would maintain an important lifelong friendship and association. He also knew other early 20th Century Irish writers including W.B. Yeats, A.E. Russell, James Stephens and Padraic Colum. His research on Dublin architecture, and specifically on the history of plasterwork in the city, resulted in the publication of a number of books on the subject including Dublin Plasterwork (1940), Newman House and University Church (1953) and Dublin Decorative Plasterwork of the Seventeenth and Eighteenth Centuries (1967). His legal career saw him rise to the post of Registrar of the Supreme Court before his retirement in 1953.

Actress, costumier, teacher, and suffragist, Helen Laird (1874-1957) was born in Limerick. She was involved in the Irish National Theatre Society (later the Abbey company) from its inception, as a costume and set designer as well as a player. She had significant roles in their productions of works by W.B. Yeats, Padraic Colum and J.M. Synge, frequently appearing under the stage name Honor Lavelle. Later she worked with the Theatre of Ireland appearing in productions of works by James Cousins and Douglas Hyde. Besides her acting career, Laird worked as a chemist for W & R Jacobs and taught Science in Alexandra College. She was also active in radical political circles, counting Maud Gonne and Hanna Sheehy Skeffington as close friends. With Gonne, she helped form the Ladies' School Dinners Committee and she was also heavily involved in the Irish Women's Franchise League which aimed to gain women the vote.

Curran and Laird married in December 1913. As their social circles blended a vibrant and diverse group of artists, historians, playwrights, actors and writers were brought together with the couple at its centre. This group found an outlet in their famed weekly salons, held every Wednesday afternoon at the couple's home on Garville Avenue.

The Constantine Curran / Helen Laird collections gather a rich cache of manuscripts, books, letters, photographs and ephemera that goes some distance in documenting the development of both literary and theatrical life in Ireland in the first half of the 20th century.

Source of Acquisition
Purchased by UCD Library in 1971.

Access
The materials in this collection are available by appointment only to research students, reaching staff and scholars. Research students should have a letter of recommendation from their supervisor.

Reproduction
Photocopying or digital photographing of this material is not permitted.

Finding Aid
A significant amount of the material in this collection is listed online in Sources: A National Library of Ireland database for Irish research. This search tool is the online version of "Hayes, Richard J. (1965) Manuscript Sources for the History of Irish Civilisation, Boston: Hall", also available in James Joyce Library, Level 2, Ref GR 016/091.

There is a list of the Joyce material held in the Curran Collection.

All James Joyce letters have been published in Gilbert, Stuart (ed.) (1957) Letters of James Joyce,  London: Faber and Faber.

Find information on Constantine Curran and Helen Laird in the Dictionary of Irish Biography (UCD only).