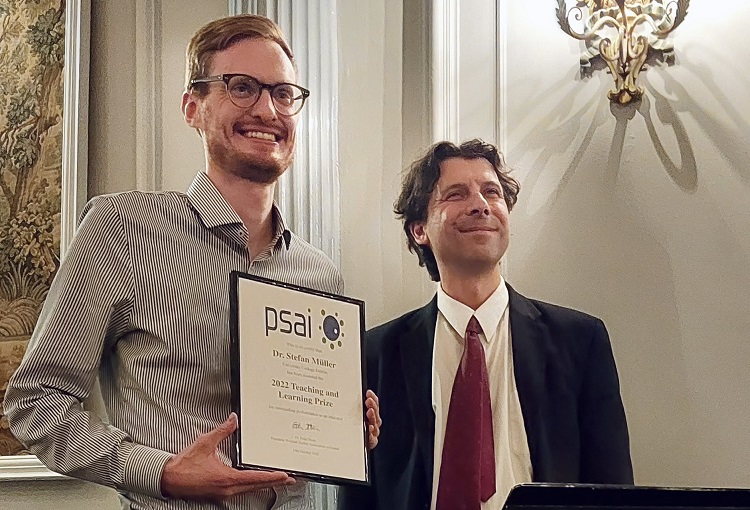 The Political Studies Association of Ireland (PSAI) has named Dr Stefan Müller the 2022 recipient of its Teaching and Learning Prize.

Recognising political scientists whose teaching has incited intellectual curiosity and raised awareness of the significant relationship between the theory and practice of politics, the award was presented to the Ad Astra Fellow from the UCD School of School of Politics and International Relations at the group's annual conference.

Formerly a senior researcher at the University of Zurich, Dr Müller is a founding member of the Connected_Politics Lab at UCD, a fellow at the UCD Geary Institute for Public Policy, and a member of the UCD Energy Institute.

He is also co-author of the quanteda R package, and maintainer of the Irish Polling Indicator, which combines all Irish opinion polls for the Dáil into one that estimates public support for Irish political parties.

Honoured and delighted to have received the 2022 @psaitweets Teaching and Learning Prize. It means a lot! pic.twitter.com/LEnHdrsFy0

Dr Müller's research focuses on political representation, party competition, political communication, public opinion, quantitative text analysis, and the application of computer vision techniques; and his work has been published in journals such as the American Political Science Review, The Journal of Politics, and the European Journal of Political Research, among others.

Established in 1982 to promote the study of politics both in and of Ireland, the PSAI has contributed significantly to a greater understanding of Irish political science and history, helping to place Irish politics in a broader comparative perspective.

Recipients of its Teaching and Learning Price are awarded sponsorship by the PSAI, as well as receive the opportunity to present their work to the teaching and learning panel during the annual PSAI conference.

Past awardees of the PSAI Teaching and Learning Prize: