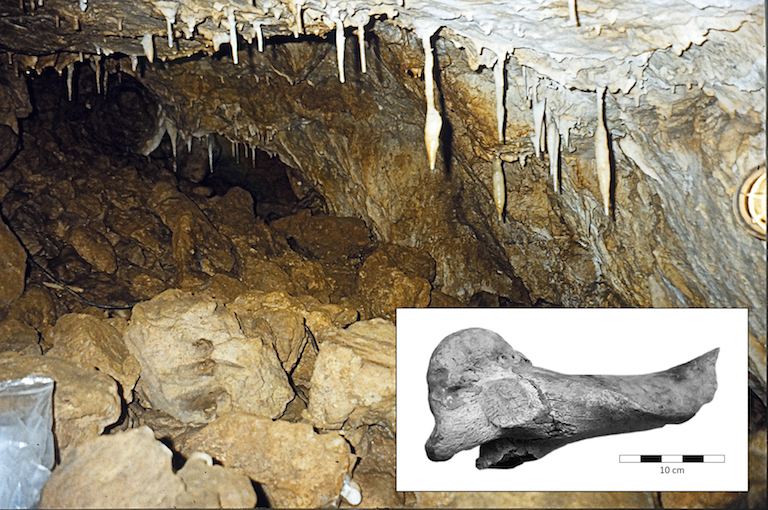 Scientists have determined that a now-extinct species of giant wild cattle known as the aurochs crossbred with the ancestors of modern cattle in Britain and Ireland thousands of years ago after they arrived here from the Near East.

The study found strong evidence for gene flow from the wild aurochs into early domestic cattle in Britain. This must have happened before the aurochs was hunted to extinction in Britain more than 3,000 years ago.

Researchers made the finding after they successfully reconstructed the genome sequence from one of the extinct animals that was a representative of the north-western European population of aurochs.

The scientists used whole-genome sequencing data generated from a 6,750-year-old British aurochs bone discovered in a cave in Derbyshire, England. The study was published in the journal Genome Biology.

Pictured above: inside of cave in Derbyshire, England where the 6,750-year-old British aurochs bone was discovered. Inset: close-up image of ancient aurochs bone. (Homepage image: Aurochs via Wikimedia Commons)

As a result, the researchers conclude that the gene flow from wild aurochs in Britain has significantly shaped the genetic composition of certain breeds of modern British and Irish cattle, in contrast to breeds from mainland Europe.

Ancient heritage or landrace cattle breeds, such as Scottish Highland cattle and Irish Kerry cattle, were found to be most closely related to the British aurochs, a finding that has significant implications for genetic conservation programmes.

It has found that the breeding of wild aurochs with domestic cattle in Britain may have been an important factor in the evolution of these livestock, perhaps through the introduction of desirable traits that helped early domestic cattle to adapt to new environments, such as those encountered in Britain.

This crossbreeding could have been inadvertent, but it is also possible that early farmers in Britain may have purposefully restocked their domestic herds from wild aurochs populations.

The work was led by Professor David MacHugh from the UCD School of Agriculture and Food Science, University College Dublin, who said: “Our new study contradicts earlier simple models of cattle domestication and evolution that we and others proposed based on studies of uniparental genetic systems, such as mitochondrial DNA and the Y chromosome.”

“What now emerges from high-resolution studies of the nuclear genome is a more nuanced picture of crossbreeding and gene flow between domestic cattle and wild aurochs, as early European farmers moved into new habitats, such as Britain during the Neolithic.”

High-resolution whole-genome sequence data from 81 animals was directly compared to the aurochs genome sequence to identify key genes that differentiate domestic cattle from their wild counterparts.

A parallel approach, using genetic marker data from 1,225 cattle, provided a broader picture of the genomic changes that have shaped the evolution of modern breeds.

This information will be particularly valuable for the genome-assisted cattle breeding programmes that underpin dairy and beef cattle breeding in Ireland and other countries.

The work ties in with Charles Darwin’s fascination about the origins of domestic animals and the dynamics of selective breeding for understanding biological evolution.

The ability to retrieve whole genome sequences from extinct ancestors of domestic animals, including cattle, fulfils, in some respects, Darwin’s goal of fully understanding the heritable traits that were shaped by early farmers, to produce the wide variety of modern breeds of cattle.

Dr Tad Sonstegard, Chief Scientific Officer for Agriculture, Recombinetics, Inc. and a co-author on the study, said: “The publication of the aurochs genome is a major landmark for bovine genetics and illustrates the importance of archaeogenomics for understanding functionally-important trait variation in domestic livestock species.”

Standing over six feet tall to the shoulder and weighing more than a ton, aurochs were giant wild cattle that roamed the plains of Europe for thousands of years. The last recorded aurochs died in Poland in 1627.

European domestic cattle are thought to have descended from Asian aurochs that were domesticated at the dawn of agriculture in the region of the Near East known as the Fertile Crescent.