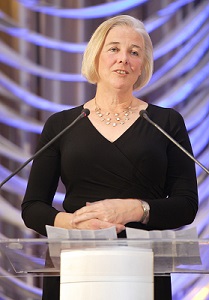 The UCD Foundation Day Medal has been awarded to former European Commission Secretary-General, Dr Catherine Day. She received the award for her outstanding impact on the European Union.

‌‌The Foundation Day Medal is presented to a distinguished alumnus of national and international recognition whose influence and contribution is a source of great pride to University College Dublin.

She also served as Deputy Director General for External Relations of the European Commission and played a central role in the EU’s enlargement in 2004, when 10 new member states joined the EU.

She also played a critical role in the direction of policy under the Jean-Claude Juncker-led European Commission.

The Dublin native has remained an active contributor to UCD, assisting in the setup of an alumni chapter in Brussels.

At the special alumni event, President of UCD, Professor Andrew J Deeks, also presented awards to 15 other notable alumni who have achieved excellence in their fields and whose professional achievements are a source of inspiration to students.

Mr Tynan came from an agricultural consultancy background and served as an adviser to former Agriculture Minister Ivan Yates and also worked for the Irish Farmers Association. He was recently appointed to the cabinet of EU Agricultural Commissioner Phil Hogan.

Yvonne Farrell and Shelly McNamara are both directors of Grafton architects. They have been recipients of numerous architectural awards. Grafton Architects won World Building of the Year award in 2008 for its Bocconi University building in Milan. In 2015, they won the Jane Drew Prize for their influence on the architectural profession. They are both Adjunct Professors at the UCD School of Architecture.

Jim Sheridan is a six-time Oscar nominee film director, whose highly acclaimed film, My Left Foot, starring Daniel Day Lewis won several Oscar awards. His other films include In the Name of the Father, In America and The Field.

With nearly 30 years professional policing experience, Ms O’Sullivan in 2014 became the first female Commissioner of An Garda Síochána since its inception in 1923.

While studying for his PhD in Electronic Engineering in UCD, Dr Burke developed an online service called “Street Wise”, one of the world’s first mobile maps applications. He now leads a team of over 300 engineers at Google in Silicon Valley.

Mrs O’Callaghan received this award for her contribution to broadcasting. She has been the presenter of RTÉ’s leading television current affairs show, Prime Time, since 1996 and won an IFTA for Best TV Personality in 2015.

Dr Bradley is internationally celebrated for his work and research in head and neck surgery. He is Emeritus Professor of Head and Neck Oncologic Surgery at the University of Nottingham and recently retired as Head & Neck Oncologic Surgeon at the University Hospitals Nottingham, Queen's Medical Centre. Prof Bradley has had a distinguished career as a surgeon, researcher and educator. He has published widely, with more than 120 peer-reviewed articles, on topics such as the diagnosis and management of head and neck cancer.

Ms Pye is an innovative leader in the area of child welfare and health services. She is Director of Public Health Nursing for Longford/Westmeath. She was instrumental in launching the Family Needs Assessment Framework for public health nurses working in the Midlands in Ireland.

Ms Buckley is a chartered physiotherapist and one of the most decorated players in GAA history, having won 16 All-Ireland medals, the most recent in both the 2015 Gaelic football and camogie All-Ireland championships for Cork.

After serving initially as Deputy Chief Medical Officer from 2001, Dr Holohan was appointed in 2008 as Chief Medical Officer, the most senior government adviser on health. He is responsible for a range of public health campaigns including Healthy Ireland – a framework for improved health and wellbeing in Ireland, as well as guiding government response to medical and health crises.

Fr McVerry has dedicated his life to fighting poverty and homelessness. In 2014 alone, the Peter McVerry Trust supported approximately 4,500 individuals through providing over 2,300 residential placements.

Mr Weld is one of Ireland's most successful racehorse trainers. He holds the record for the most racehorse winners trained in Ireland.  Mr Weld is also a dedicated veterinarian and Ambassador for Veterinary Education and Research.