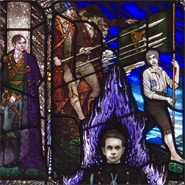 The years after Catholic Emancipation in Ireland (1829) while pocked with intermittent political upheaval, famine and emigration, saw the majority population gradually gain a foothold on the rungs of education and influence.

In 1854, the movement spearheaded by Cardinal Cullen and led by John Henry Cardinal Newman, succeeded in opening the doors of a new university, which would make higher level education accessible to a broad sweep of Irish people, creating a new class of educated Irish who would become the civil servants, the politicians, the lawyers, the architects, the historians and philosophers, the authors and playwrights, the doctors and engineers - the thinkers and doers who were to shape Irish society into the proud nation we are today.

The following extract from UCD - A National Idea: Donal McCartney, Professor Emeritus of Modern Irish History, University College Dublin. 1999 paints a picture of the new university when it first opened one hundred and fifty years ago:

The beginning
The Catholic University opened its doors on the feast of St Malachy, 3 November 1854. On that day the names of seventeen students were entered on the register; the first name entered was that of Daniel O'Connell, grandson of the Liberator. The following Sunday, to a grand total of four officers and fifteen students, Newman gave an address entitled 'What are we here for?' Conscious of the small number with which they were beginning their great endeavour, he prophesied that when they were old they would look back with great pride and pleasure to St Malachy's Day, 1854.

Newman was a great believer in the idea that his students should stay in independent, self-supporting halls or colleges in small groups under a dean and private tutors. Each house was to have its own chapel and common table. With this purpose in mind the university opened with three houses: 86 St Stephen's Green, with was known as St Patrick's or University House, under the care of Rev. Dr Michael Flannery; 16 Harcourt Street, known as St Lawrence's under the care of Rev. Dr James Quinn, who also had his school there; and Newman's own house, 6 Harcourt Street, known as St Mary's under Newman's personal supervision.

Newman as Rector
It is usual to think of Newman of the Dublin years as the grand philosopher of a liberal university education; the theorist who delivered the famous lectures on the idea of a university; the author of the University Sketches on the origins and development of universities, in which he provided a practical illustration of what his Idea of a University had only dealt with in the abstract and which were first published in the Catholic University Gazette, edited by Newman, to provide information about the proceedings of the Catholic University. It is usual to think of him as the deliverer of the inaugural and other addresses to the Faculty of Arts, to the School of Medicine, and to the evening students; the preacher of sermons in the University Church, published as Sermons Preached on Various Occasions (1857); the defender of the Catholic University in articles published in several journals; and the writer of the annual reports of the rector and the drafter of structures, rules and regulations for the new institution, published in My Campaign in Ireland. All these things he did, and admirably and elegantly, but there was another, more prosaic and practical side to his Dublin career. For at times Newman was obliged to behave more like the harassed housemaster in a boarding school than as the rector of a new university.

The early students
Of the eight original students in Newman's own home, two were Irish, two English, two Scottish and two French. Among them were a French viscount, and Irish baronet (Sir Reginald Barnewall), the son of a French countess, the grandson of a Scottish marquis, and the son of an English lord. The rector felt that this was a good start and one that should raise the tone and image of the university and attract others. Later were added to his care two Belgian princes and a Polish count.

The one native-born middle-class Irishman to be admitted to Newman's house was the sixteen-year-old only son of a solicitor from Limerick by the name of O'Shea. 'That O'Shea' as Newman called the inmate of his front drawing-room, lasted for half a year only, but half way through that period he was causing the rector much trouble. 'My youths, all through that O'Shea, or rather in the person of O'Shea, are giving me trouble - and I don't know how I possibly can stand another year. I think he must go at the end of the session.' The troublesome student left and went to Trinity instead, but his mischief-making was far from over. It might be said that the rector had unerringly recognised the boy was to be father to the man; for as Newman lay dying in August 1890, his former student, Captain William O'Shea, was at the centre of the divorce scandal that was to destroy the political career of Charles Stewart Parnell.

The non-Irish students were attracted because of Newman's reputation. Many of them were the sons of friends who had been influenced by the Oxford Movement; a number followed him directly from the Birmingham Oratory School. Some of his professors and benefactors were converts. To that degree the Catholic University was, if not a product, at least an extension of the Oxford Movement.

The great majority of the students did not have the privilege of living in the rector's house, and Newman was from time to time to be agreeably surprised at the calibre of the Irish students who lived in the other houses. And well he might, for among the prizemen, during and after Newman's time were William Walsh, afterwards Archbishop of Dublin and first Chancellor of the National University of Ireland; Patrick O'Donnell, who, as Bishop of Raphoe, servicing on the Governing Body of UCD, was another link between the Catholic University and University College; H. H. O'Rourke-McDermott, afterwards Attorney-General for Ireland under Gladstone; John Dillon, who as a parliamentarian played a big part in the university legislation of 1908 that established the NUI; and James Lynam Molloy, afterwards the composer of many popular songs, including 'Bantry Bay', 'The Kerry Dances', and 'Love's Old Sweet Song'. Molloy was the only student who was threatened with rustication by Newman, for absconding one night from University House and attending an evening party without leave. Newman, however, accepted the pleas of Molloy's mother and allowed him to continue his studies. And so, of the Irish students who caused Newman most trouble, one was afterwards to be condemned also by generations of nationalists for the role he played in Irish politics, while the other was to be loved and admired for the pleasure his songs have given down the years.

University Church
Newman's own beautiful University Church was opened in 1856 beside 86. Apart from religious services it was used also for public university functions and occasions such as the opening of academic sessions and the making of awards.

Early difficulties
Despite international support for Newman's university, the early years were not easy.

The Catholic University suffered from the handicap that, unlike Trinity and the Queen's Colleges, its degrees were not recognised by the state, nor did it receive any state funding. The British government, which had just provided the Queen's Colleges, was understandably reluctant to give a charter or funds to an institution that the bishops had founded in opposition to the government's own scheme.

In the meantime the Irish masses, recovering from the disasters of the Famine, had not much interest in the Catholic University. Those students and parents who were more anxious for a state-recognised degree than for the ideal of a Catholic university education looked beyond Newman's institution for their satisfaction. So, while some middle-class Catholics went to Trinity for their degrees, and Anglo-Irish gentry sent their sons to the English universities, and English Catholics (especially after Newman's time) were not attracted to Dublin, a number of Catholics in the provinces found the Queen's Colleges more attractive than the Catholic University.

Newman's legacy
In his approach to university education, Newman strove for a proper balance between utilitarian and liberal objectives. He not only sought to preserve what was best in the older university courses but was also eager to have his university respond to the needs and the developments and ever widening field of knowledge of his own time. He knew the value of an education in the classics; but any notions that his university was therefore hampered by, or restricted to, a classical education are very wide of the mark. Newman founded in the Catholic University a chair of poetry and one of the first chairs of English literature in Ireland or Britain. His university was also in the forefront of European academic advancement, with chairs of political and social science, political economy and geography. It was this sensitivity that led him to found the first chair of archaeology and Irish history in Ireland.

Newman recognised the benefits that a university could bestow on the community in which it was situated by initiating a series of public lectures to be delivered by the professors of the Catholic University. Before any other university college in the country he launched a system of evening lectures for students who were employed during the day.

In one of his best remembered passages, Newman held forth a challenge and a prophecy for Ireland as well as for his university:

I look towards a land both old and young; old in its Christianity, young in the promise of its future… I contemplate a people which has had a long night, and will have an inevitable day. I am turning my eyes towards a hundred years to come, and I dimly see the island I am gazing on become the road of passage and union between two hemispheres, and the centre of the world… The capital of that prosperous and hopeful land is situate in a beautiful bay and near a romantic region; and in it I see a flourishing University, which for a while had to struggle with fortune, but which, when its first founders and servants were dead and gone, had successes far exceeding their anxieties.

In all he has bequeathed, whether by way of the buildings in St Stephen's Green in which he laboured or the ideas incorporated in his legacy, or the vision he handed on, or the challenges he posed, Newman has forever left UCD in particular, and university education in general, in his debt.