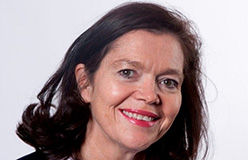 The award recognises Professor Godson’s outstanding research achievements on the vascular complications of diabetes and the resolution of inflammation.

Professor Godson (pictured below) received her award at the 17th International Eicosanoid Research Foundation Conference on Bioactive Lipids in Cancer, Inflammation and Related Diseases in New Orleans, USA (30 October – November 02) following her award lecture on Lipoxins and synthetic lipoxin mimetics along the continuum from resolution to repair.

Inflammation is a critical component of how the body protects itself against infection and injury. It is vital that the inflammatory response is tightly regulated. Many diseases reflect a failure of regulation which leads to inflammation persisting. Professor Godson and her team focus on the resolution of inflammation seen in diabetes. 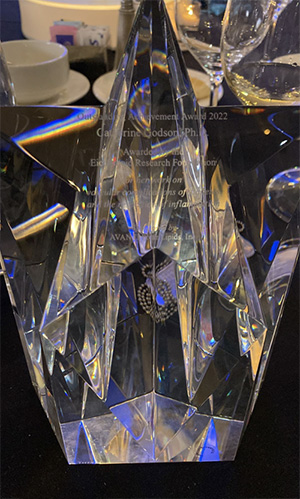 Their work has identified several mechanisms and mediators that drive the resolution of inflammation in the body and in diabetic complications.

The body can produce messenger molecules that turn off inflammation. The Godson team have developed new synthetic compounds that mimic these molecules. These are being investigated as a potential new class of drugs to treat inflammatory conditions including diabetic kidney disease.

Commenting on the award, Professor Godson said, “I am honoured that the work of so many talented colleagues and collaborators in my lab and elsewhere over the years has been recognised internationally. It is an exciting time for us as the potential to develop our findings from basic research towards therapeutic application gathers momentum.”

The Eicosanoid Research Foundation (ERF) is a non-profit organisation that provides a forum for the dissemination of the latest scientific information on bioactive lipids and mediators in health and disease as it relates to cancer, inflammation, and inflammation associated diseases such as diabetes.

The biennial ERF conferences promote the exchange of ideas between scientists of diverse backgrounds from around the world on the role of lipid mediators in various physiological and pathological processes.