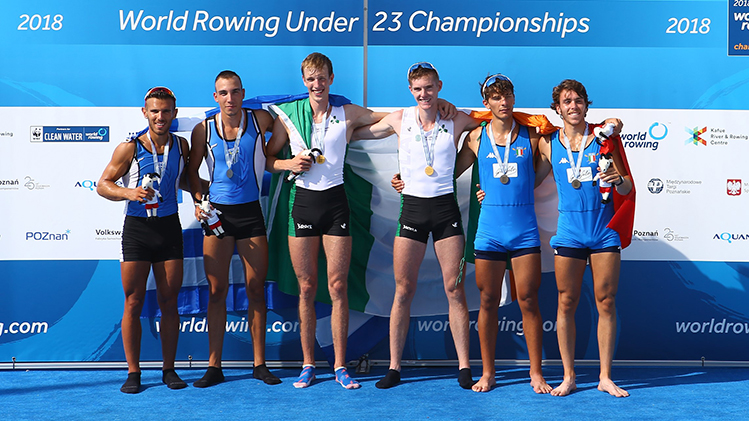 Superb runs at the World U23 Rowing Championships by rowers from University College Dublin have brought home team gold and silver.

The talented oarsmen, who are both Ad Astra Academy athletes, came in two seconds ahead of race rivals Greece to claim the top spot on the podium on Saturday.

The UCD pair, who study science and medicine respectively, are the first ever Irish team to win gold at these championships.

They won bronze in the same category last year.

Following the historic victory, it was the turn of the lightweight men’s quad, lead by UCD’s Andrew Goff, to claim silver.

In a dash to the finish line, the Irish crew came from lagging in third place to pushing past the United States to finish second behind race winners Italy.

A student at the School of Engineering and Ad Astra Elite scholar, this is Goff’s second medal at the championships in two years.

Meanwhile at the National Senior Track and Field Championships a trio of Ad Astra Elite athletes affirm their status as best in Ireland.

In a dominant display, Mark English claimed his sixth national athletics title Sunday evening with a gold in the 800m.

The student from the School of Medicine was a semi-finalist in the 800m at the 2016 Rio Olympics.

Also taking a fourth national title was Sarah Lavin, of UCD's School of Physiotherapy, in the women’s 100m hurdles.

Stepping up to the winner’s podium too was Claire Mooney, UCD Smurfit School, in the women’s 400m, and former Ad Astra member Ciara Mageean, from the School of Physiotherapy, who won both the 800 and 1500m national titles during the games in Santry, Dublin.