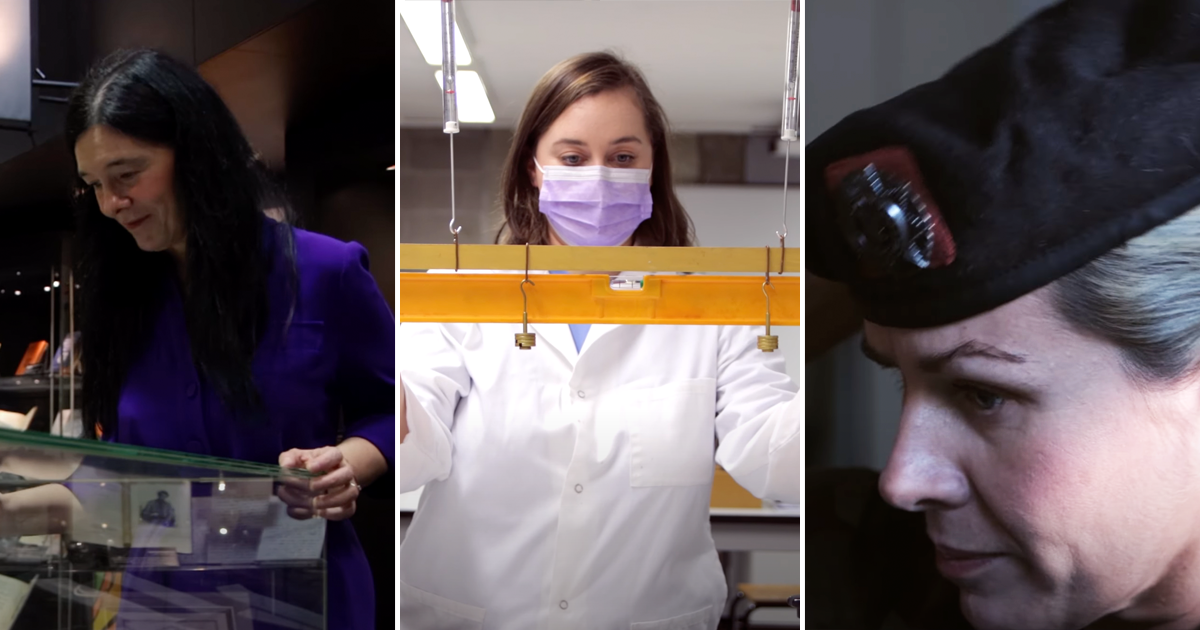 Female role models working across pSTEM are the focus of a new UCD campaign encouraging more girls to consider the field as a future career.

To mark International Day of Women and Girls in Science, a new video series ‘Role Models in pSTEM: You Can Be What You Can See’ is showcasing ten women from across Ireland who have studied physics, maths, engineering, or computer science to highlight the varied and exciting opportunities open to young women in pSTEM.

Leading the project, which was funded by the Higher Education Authority and the Institute of Physics, are Dr Aoibhinn Ní Shúilleabháin, Assistant Professor at the UCD School of Mathematics and Statistics, and Dr Catherine Mooney, Associate Professor in the UCD School of Computer Science.

“For young women to pursue a career in pSTEM, they must believe in their ability to succeed and in the positive impact their work might have on the world around them. With these videos, we want to connect them with positive role models in the subjects of physics, mathematics, computer science and engineering,” said Dr Ní Shúilleabháin.

“By creating videos for use in classrooms and on social media, we hope to make more young women aware of the very many career paths and opportunities available to them by pursuing these subjects.

“It’s also important to let girls know that they don’t have to be a ‘straight A’ student to excel in pSTEM. These videos aim to encourage the next generation of pSTEM by sharing the stories of women from a range of different backgrounds, the challenges and successes they experienced, and the impact of stereotypes or societal messages about pSTEM on their careers.”

The video campaign is accompanied by educational resources for teachers and guidance counsellors, which can be used in schools across Ireland to encourage students to identify their own local role models, while highlighting the varied and exciting career opportunities open to young women in pSTEM.

“One of the main things we found in our research is the importance of diversity in pSTEM,” said Co-lead Dr Catherine Mooney.

“It’s so important that the people making the technology we use are a reflection of all those who use that technology, and we can only achieve that through diversity. There is also huge potential for social good within the tech industry right now when it comes to issues such as personalised medicine and climate change so it’s a really exciting time to consider a career in pSTEM.”

The new campaign aims to address the significant gender imbalances across the pSTEM industry, with women representing less than 25% of those working in STEM, and those from socioeconomic disadvantaged backgrounds particularly under-represented.

“We hope these videos contribute to the transformation of social norms, by promoting positive role models of Irish women in the sciences,” said Professor Orla Feely, UCD Vice President for Research, Innovation and Impact.

“We want to ensure that women and girls are not only participating in the pSTEM subjects of physics, mathematics, computer science and engineering, but that they are empowered to lead and innovate in these fields.”

Director of the National Library, Dr Sandra Collins, who features as one of the role models, added: “I believe it’s so important that we do all we can to facilitate and support the next generation of women in taking their place in pSTEM.

“If this video series inspires even one young girl by increasing the visibility of those women who have gone before, it would make me very proud.”

Lána Salmon, who is undertaking a PhD in Astrophysics at UCD and who also features as role model in the video series, said that growing up, she didn’t have “any scientists or engineers to show me that STEM is not just for one kind of person”.

“So, an initiative like this is important to me because it showcases the people behind STEM careers, and their diverse backgrounds, personalities and jobs. When I was in secondary school, I worried about whether I would feel like I belong in the STEM community.

“I wondered if I would be smart enough, or whether I would find friends with similar interests to me. I would have really benefited from hearing the stories of real people in science and engineering and I hope that through this project, we will show that anyone can have a career in STEM and become part of the welcoming STEM community."

Also featured in the video series is Cathy Fleming, a graduate of UCD who works as a medical physicist at St Luke's Hospital: “I feel very lucky that I went to a school with a very strong cohort of all female science teachers,” she said.

“Eight girls from my Leaving Cert year went on to do science degrees and I think a lot of that was down to how the subject was taught and the fact that a scientific career was always included as a possibility for us. I think it's important to show how diverse science is; that you can do a science degree and end up in more traditional science jobs such as academia or laboratory work, but that equally learning about science is about engaging your mind and there a lot of options for where that can take you.

Adding: “I think this video series is a great initiative to help illustrate the variety of ways in which many, very different women, have used their scientific skills to bring themselves into positions where they are interested in their work and feel like they are contributing and making a difference.”

The full suite of videos as part of the ‘Role Models in pSTEM: You Can Be What You Can See’ series will launch in May 2022.