The latest Consumer Market Monitor (CMM), published today by the Marketing Institute of Ireland and UCD Michael Smurfit Graduate Business School forecasts that in 2019, imported second-hand cars from the UK will overtake the number of new cars sold in Ireland for the first time.

Professor Mary Lambkin of UCD Michael Smurfit Graduate Business School, who authored the report, also reported; “The CMM reveals an overall decrease in car sales in Ireland, as new and second-hand car sales, together with imports, continue to decline from a high of 901,000 in 2016 to just 839,000 this year.

“The latest data represents a significant blow to the Exchequer and the motor industry, as tax revenues from lower sales and dealer profit margins continue to fall.” According to the CMM, there is an average shortfall of €6,000 between taxation on each new car sale (€8,500) compared to tax revenues for each imported vehicle registration (€2,500). 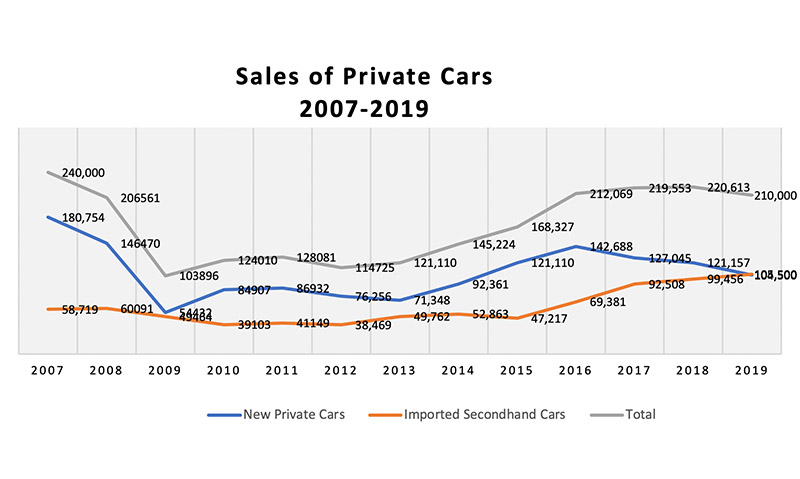 In broad terms, the CMM shows strong, ongoing employment growth and rising disposable income, which provide the underlying conditions to support growth in the wider economy. Growth in employment and disposable income will be the main economic drivers in the years ahead, the CMM shows, with numbers employed expected to grow by 2.5% in 2019 and 2% in 2020, adding a further 104,000 people to the current workforce of 2.281 million. Having experienced annual growth of 2.5% in recent years, wages are expected to rise further by 3.6% this year and 3.7% next year as labour-market capacity diminishes.

The increasing numbers employed, together with wage increases, is leading to a substantial uplift in the amount of disposable income circulating in the economy. Disposable income per person exceeded its pre-crisis peak for the first time in 2017, up 5% a year in each of the past four years to a total of €109 billion in 2018. Household incomes are expected to increase by a further 5% in 2019, especially if a Brexit agreement is reached and economic conditions stabilise.

“All of the economic fundamentals in the economy remain strong with continuing growth in employment and modest wage increases being the primary drivers of growth.  The strong growth in consumer spending is creating a welcome multiplier effect by creating further employment in sectors such as retail and hospitability” said Tom Trainor, Chief Executive of the Marketing Institute of Ireland.

As a counterpoint to this, however, consumer confidence weakened in the face of protracted negotiations about Brexit and ongoing anxiety that the repercussions of a hard / no-deal Brexit scenario would damage the Irish economy and employment.

This is reflected in consumer spending, which is forecast to remain sluggish. Spending increased by 3% in 2018 to €104 billion, but slowed to 2.6% in the final quarter, reflecting a weakening of consumer sentiment. The outlook for this year is for consumption to moderate further as worries about a hard / no-deal Brexit and the implications for the economy persist, with growth in confidence limited to 2.1% in 2019 and 2% in 2020. These forecasts assume that consumer confidence will remain subdued, as the risk of a disruptive UK departure from the European Union remains.

Household deposits in Irish banks grew by 4.3% in 2018 to €4.1 billion, the largest annual increase since early 2008, reinforcing a cautious approach by Irish consumers to their personal finances.

The state of the economy contrasts greatly with the UK, which over the past two years has experienced a weakening in virtually every metric tracked in this monitor, from property to cars to retail and services. In particular, growth in consumer spending has weakened, from an average of 3% in recent years to just 1.6% in 2017 and 1.8% in 2018. Only time will tell whether this downward trend is temporary.