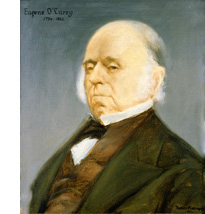 In 1854 Eugene O'Curry was appointed to the Chair of Irish Archaeology and History by John Henry Newman, Rector of the newly established Catholic University in Dublin (later to become the National University of Ireland). This was one of the first Chairs of Archaeology in these islands.

Born at Dunaha (Doonaha) in Co. Clare in the year 1794, he learned to read and write Irish from his father. He grew up on the family farm and then moved to Limerick acquiring a post in a lunatic asylum where he remained for twenty years. During his years in Clare he was a well-known collector of manuscripts some of which were purchased by the Royal Irish Academy. Through this contact he was invited to join the staff of the Topographical and Historical the Ordnance Survey in 1835.

No other scholar had studied so comprehensively the national manuscript material surviving from ancient times. He provided the first scholarly interpretations and made copies of some of those housed in the Royal Irish Academy and Trinity College collections. The unique partnership of O'Curry's work on the manuscript research, and John O'Donovan's work on topographical studies carried out from 1835 to 1842, combined to contribute enormously to the work of the Ordnance Survey and resulted in several important publications as well as the invaluble Ordnance Survey Letters.

This section of the Ordnance Survey was closed down in 1842 and O'Curry was employed by the Royal Irish Academy to compile a catalogue of the manuscripts in their collection. This resulted in several volumes which included summaries of the contents of each manuscript. The post-Ordnance Survey years must have been financially difficult for him. He had a young family to support on a very meagre and insecure income (O'Donovan and O'Curry married two sisters). His appointment to the Chair in 1854 would have relieved him of these financial pressures. He died on July 30th 1862.