The 'university of revolution'

Frongoch near Bala on the edge of Snowdonia in North Wales is a location of particular significance in recent Irish history. During the second half of 1916, some 1700 Irishmen were interned there for their part in the Easter Rising. In the lead-up to the Rising, the different groups involved in the nationalist cause were highly disparate both in their social make-up and political perspectives. However, the shared experience of internment forged a strong sense of collective identity and radicalised even those who had been only peripherally involved in the conflict. Famously dubbed the ‘University of Revolution’, the internment camp at Frongoch was the location where the IRA was formed and where significant figures in the subsequent War of Independence, notably Michael Collins, trained internees in the tactics of guerrilla warfare. 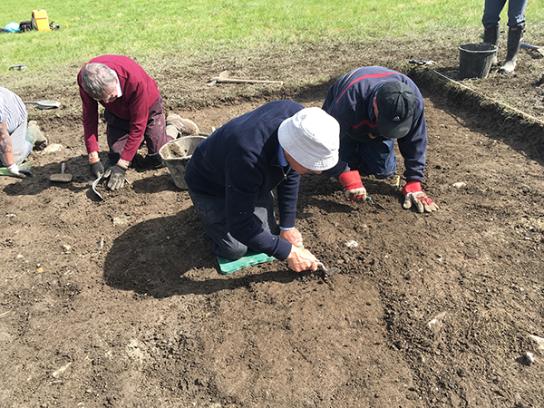 A joint project, led by Prof. Joanna Brück (UCD) and Dr Gary Robinson (Bangor University) has been carrying out archaeological survey and excavation at the site since 2015 to investigate the use of space within the camp; the way in which material culture was employed to negotiate social and political identities; and relations between the Irish internees, their guards, and members of the local Welsh community. Although the original buildings are no longer standing, earth resistance and magnetic gradiometry survey indicate the likely location of features such as hut footings, paths and latrines. Excavations have uncovered part of a possible cook-house, a cobbled pathway and large numbers of finds including Army-issue white ceramics, local earthenwares, blue and white transfer-printed ceramics, iron nails, pieces of barbed wire, window glass, a fragment of clay pipe, bottle glass (some from medicine bottles), a button and part of a leather boot. We have been lucky enough to be assisted on our excavations by descendants of some of the internees, for whom the haptic and experiential aspects of archaeological excavation provided a very different way engaging with and understanding the past to traditional written accounts.

Society for Post-Medieval Archaeology and the Cambrian Archaeological Association