Why should we do what we’re told to do by the government and the medical authorities?  It’s not a trivial question. It can seem that driving the whole family off to a deserted spot in the countryside and having a walk harms nobody. Shortly before such behaviour was officially banned, I did just that.  Why shouldn’t I do the same thing again on the next sunny weekend?  I know plenty of places where there’s absolutely no chance we’ll encounter other people at all let alone get within two metres of them.  Am I just being craven by following the rules rather than deciding the issue for myself based on my own ethical evaluation?

On the one hand, if I know for sure I’m doing no harm and can get away with it, it’s a victimless crime.  On the other hand the message that is being rammed into us by the government, the medical experts and the media is that such behaviour is the next worst thing to actual murder.

I think there are three possible responses from someone who doesn’t follow the healthcare advice and the instructions they are getting from the medical experts and government.

One is to reject the advice as bad advice.  Perhaps you think the experts are wrong and that you know better.  Or perhaps you think the experts might be right, but the policy of saving lives and protecting the health service at the expense of the economy and personal freedom is wrong; the cure is worse than the disease.  I don’t think either of these things, but I must admit to feeling the emotional pull in this direction.  It is a classic case of wishful thinking.  I’d love it if the experts were proved wrong, the death toll from Covid-19 is a fraction of what they are predicting and we can all go back to normal in a couple of weeks; I’d also love it if there’ll be no climate catastrophe and all the doom-mongerers are proved wrong about all the bad things that are going to happen in the world unless we change our behaviour radically.  When some misleading newspaper report comes out citing research done at Oxford University that suggests that half of us might already have had Covid-19, my ears prick up; would that it were true.

A second sort of response is to accept that the advice is good, that following it will avoid a catastrophe and lead to things getting better in the long-term, but not to care less.  As long as you’re not going to die of it or need a hospital bed in the near future, why should you care what happens to the rest of the world?  This is an unashamedly selfish response, the response of someone whom ethics has left behind.  Even if I thought like this myself I wouldn’t admit to it here.

A third sort of response – and one that I have to admit to being drawn to - is to accept that the advice is good, but claim that it doesn’t apply to you.  You are an exception.  Perhaps you think you are an exception because you are special – you are the President of the United States of America or you are a senior civil servant or medical advisor.  Your role is to tell others what to do, but you yourself are a law unto yourself.   After all, we’re all special, aren’t we?

Or perhaps you think you are an exception because, although you acknowledge that if everyone followed the advice we would all be better off, you know that you can break the rules without adding to the risk.  It’s good that people are stopped from driving to beauty spots because if everyone allowed themselves to do it, there wouldn’t be enough space between them for proper social distancing and the virus would spread.  But since most people are staying at home and there is no risk that you will get close to anyone by driving into the country and having a walk, there’s no harm if you do so. 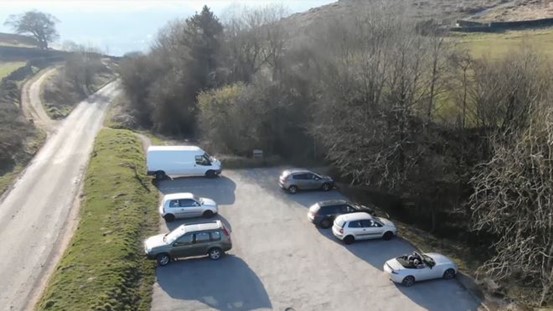 I was struck by the comments in response to the Derbyshire police force in the UK using their twitter account to shame walkers.  They posted drone footage of seven cars parked respectful distances from each other and people going off for solitary walks or with their dogs observing social distancing.  “Walking your dog in the Peak District: NOT ESSENTIAL.”  This attracted negative comments about the police tactics, branding them the worst kind of nanny state policing and pointing out that each group pictured in the footage was keeping a respectful distance from everyone else.  The odd comment in support of the police tried to argue that by going for a walk in this area you would be risking spraining your ankle and forcing the stretched emergency services to waste their precious time on you.  But this argument seems a bit weak.  If it had any validity it should apply also to people who live round the corner from this beauty spot and don’t need to drive there and to people going for a jog from their homes along uneven footpaths.

My own reaction was partly one of fear – fear that the police might swoop down on me at any moment  - the sort of irrational fear you have walking through customs with nothing to declare.  But also I shared the outrage in the critical comments.  What a ridiculous use of police resources.  On reflection, however, I can see that perhaps the police in this case were ethically right, even if the tactics were questionable.   It’s not about whether those particular people were causing any risk by their behaviour.  They weren’t, but that’s not the point.  The reason they weren’t causing any risk is that there only were seven cars in that car park, not thirty-seven.  And the reason there were only seven cars was that most people were following the rules and not driving off somewhere to have a walk.  I might think that as long as everyone else follows the rules it’s OK for me not to follow the rules, as that won’t do any harm.  But by thinking just about the possible harm of my own behaviour I am separating myself off from the collective effort to save lives and the health service.  I am cocking a snook at the suckers who are slavishly following the rules.

In general it may be infantile to do things only because you are being told to.  We should take responsibility for our own ethical perspective.  This is the lesson taught by all the hard-headed philosophers from Kant to Nietzsche.  Also we should remain sceptical about whether the powers that be really are to be trusted.  But ultimately, if there is a collective mission to do something and you think that thing should be done, then you should just pull your sleeves up and join in.  Stepping aside and calculating whether there is no harm done if you leave it to others just isn’t very friendly.

So, in the end I feel it would be quite poor to make myself a rule unto myself and drive off into the countryside for a walk.  For a lovely sunny moment I can lose my sense of being part of a collective mission, and think I’ll allow others to suffer while I enjoy myself with my family.  But it would be a failure of loyalty.  If that’s right, and community spirit and loyalty are the ethical motivations for doing what you’re told in this crisis, then community-building, rather than shaming, should be the priority of the enforcement agencies.

Director of the Centre for Ethics in Public Life