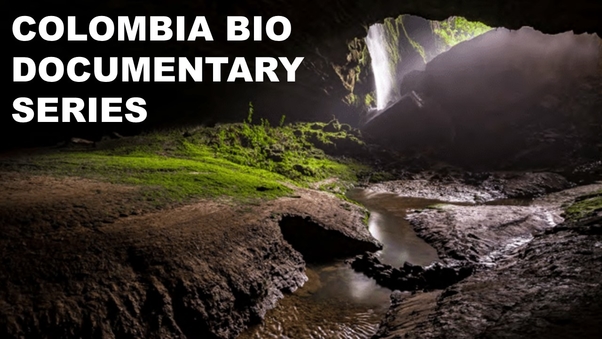 This autumn, the Earth Institute is delighted to be partnering with the Embassy of Colombia to Ireland and UCD Biological Society for a series of documentary screenings on Colombia's biodiversity. The four documentaries in the Colombia Bio series explore how Colombia supports the study, conservation, management and sustainable use of its incredible  biodiversity.

21 October  |  17.00-18.20  |  Series launch with Ambassador Patricia Cortés Ortiz, Diego Calderon, Dr Adam Kane and Prof. Tasman Crowe  |  Event video link
Join us for an introduction to the Colombia Bio series and first screening with Diego Calderon, a Colombian biologist and ornithologist, who is featured in the opening documentary in conversation with Dr Adam Kane, UCD.

Screening 1  |  17.20  |  La casa de la vida  |  by Juan Fernández López, in which a group of scientists teams up with FARC ex-combatants to access La Morena jungle in Anorí, Antioquia, for the first time.

Lunchtime screenings, October and November 2021
26 October  |  13.00-14.00  |  online and in-person, Room 1.29 UCD Science North  |  La tierra del agua by Nicolás Ordoñez, which explores the territory beyond Providencia, enters the Serrana Cay located in the Sea Flower reserve, one of the largest pockets of diversity of the Colombian Caribbean

2 November  |  13.00-14.00  |  online and in-person, Room 1.29 UCD Science North  |  Vichada by Clare Weiskopf, a reflective journey between the savannahs and gallery forests of the Tomo River, through the Amazon and Orinoquía regions.

About Colombia's biodiversity
Colombia holds almost 10% of the world's biodiversity and is one of the world's megadiverse countries, ranking first in bird and orchid species diversity and second in plants, butterflies, freshwater fishes and amphibians. There are 311 types of ecosystems within Colombia, making it a country of richly complex ecological, climatic, biological and ecosystem components.

Colombia's mainland is 53% covered with natural forests, which contain more than half of the terrestrial animals and plants, and more than two-thirds of terrestrial net primary production. About 2% is covered by moorlands, 19% of this moorland is in Boyacá, representing the largest expense of moorland in the country. The moorlands are considered one of the most important ecosystems for human well-being because they are a source of water to more than three-quarters of the population in these areas.

The country's biodiversity is not only important in terms of its natural heritage value and for the conservation of unique species, these natural resources are essential for their contribution to human welfare, social equality and economic development. Biodiversity both has a direct value through the provision of goods such as food, fibre, fuel and medicines, but also in how it underpins ecosystem processes and functions that contribute to other benefits such as climate regulation, soil formation, water purification and recreation, as well as providing ecosystem resilience.

After years of internal conflict, a recent peace deal has meant that previously inaccessible areas of the country are now opening up to exploration. This provides an opportunity to gain greater understanding of the country's natural resources, and inform and support socially inclusive sustainable management of ecosystems, recognising the value of indigenous knowledge, historical perspectives, cultural values and heritage as a way to stimulate community engagement (read more).