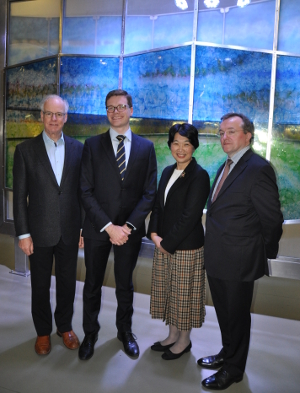 The Embassy of Japan in Ireland organised three-part Lecture Series Commemorating the 150th Anniversary of the Meiji Restoration between October and November 2018. The first inaugural lecture and the third lecture were held in collaboration with the UCD Japan Group, and held in the History Boardroom, in the UCD School of History.

The second part of the lecture series was held on 8 November at the Embassy. Dr Mary Redfern, Curator of East Asian Collections, Chester Beatty Library, gave an enjoyable talk on "The Remarkable History of the Emperor's Dining Hall".

The final part of the lecture series was a talk given on 16 November by Mr Michael Sinnott LLM (Cantab.) at UCD on "The Framing of the Meiji Constitution of 1889". Members of the general public and the legal profession attended.