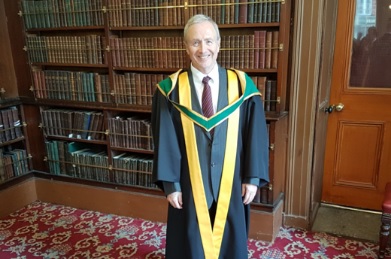 The Royal Irish Academy (RIA), the academy for the sciences and humanities for the whole of Ireland, promotes excellence in scholarship, recognises achievements in learning, direct research programmes and undertakes its own research projects. The Academy is one of the longest-established publishers in Ireland, beginning in 1787 and is committed to publishing work which not only influences scholarship, but also the wider community. Election to Membership of the Royal Irish Academy is a public recognition of academic excellence. The criterion for election to Membership is a significant contribution to scholarly research as shown in the candidate's published academic work.

“Professor Peter Kennedy, President of the Royal Irish Academy said: "We should be proud of these new members of the academy, for the honour their work brings to this country and the impact of this research on the quality of the higher education providedby our universities."

Prof. Kholodenko graduated with a Ph.D. in Biophysics from the Moscow Institute of Physics and Technology, Russia. He was then invited to work in the laboratory of Anatol M. Zhabotinsky, known for his studies of the Belousov-Zhabotinsky reaction. Afterwards, he worked at the Moscow State University, where he has made crucial contributions to metabolic control analysis, such as the development of the control analysis of cellular systems involving direct enzyme-enzyme interactions, restricted diffusion and information transfer. In 1997, Prof. Kholodenko joined the faculty of Thomas Jefferson University, where his group along with Dr. Jan Hoek and others developed the first systems biology model of the Epidermal Growth Factor Receptor signalling pathway. In 2009, he moved to Dublin to work with Prof Walter Kolch on developing Systems Biology Ireland at UCD.

The Royal Irish Academy currently has approximately 495 Members, in disciplines from the sciences, humanities and social sciences,elected in recognition of their academic achievements. Members assist the Academy in its work by serving on its various committees and working groups, by representing the Academy nationally and internationally & by giving of their expertise to help promote awareness of how the sciences and the humanities enrich our lives and benefit society.