T‌he Irish Association of Cancer Research (IACR) conference is the premier indigenous cancer conference in Ireland. The IACR is an All-Ireland, non-profit organisation for cancer researchers in the Irish biomedical community. The 54th IACR conference in Dublin in February 2018 saw a gathering of the frontiers of cancer research both from Ireland and internationally. SBI was strongly represented by researchers of various career stages taking part in different aspects of the meeting, from public talks to career guidance for young researchers.

Simone Marcone and Colm Ryan presented talks in the oral presentation session. Simone, a postdoctoral researcher, presented his work on a new class of drugs that could be effective against a type of nerve-related cancer that has extra copies of the MYCN gene, called MYCN-amplified neuroblastoma. This is a particularly aggressive childhood tumour that is difficult to treat, and where new options are desperately needed. Simone has discovered that an experimental drug which targets energy production is particularly effective against MYCN amplified neuroblastoma cells, while sparing normal cells. He is now further characterising this drug with a view to find out how it works and how it could be turned from an experimental drug into a candidate for clinical development. Simone’s work was shortlisted for the ‘Professor John Fitzpatrick’ medal for the ‘Best Public Talk at IACR’. This award ties in well with the current need for reliable and accurate communication of science with the public, which was highlighted by the Irish Cancer Society’s Head of Research Dr Robert O’Connor when he spoke about challenges for the cancer research community regarding ‘fake news’ and misleading media reporting of preliminary findings.

Assistant Professor Colm Ryan presented his work on how protein complexes could be new targets for cancer therapy. Many proteins bind to each other forming complexes that function as molecular machines carrying out vital processes in the cell. Cancer mutations can affect the assembly of these molecular machines, disturbing not only the function of the mutated protein but of the whole complex. Such a damaged protein complex often becomes more susceptible to completely losing its function when a second component becomes affected. This principle could be useful in the design of new therapeutics, as drugs that tackle the same protein complex in different ways could increase each other’s effectiveness. Colm’s work could lead to including such co-action of different drugs into the drug discovery process. 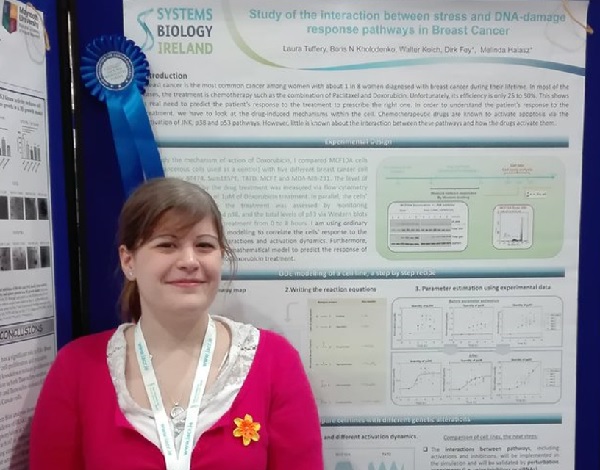 The IACR poster sessions were lively with discussion and SBI’s researchers were to the fore again. Laura Tuffery, an Irish Research Council (IRC) funded PhD student, was selected for one the ‘IACR Best Poster’ awards and was shortlisted for the final poster session. She presented her poster on the study of stress and DNA damage pathway interactions that happen in breast cancer in response to chemotherapy. Her work combines wet lab research and mathematical modelling to predict the cancer cell response to chemotherapy treatment. Her poster described the process of mathematical modelling and how cell responses to doxorubicin chemotherapy correlated with activation of the cancer-related gene p53, and the interaction of different biological pathways such as JNK, AKT, p38 and p53. Her research aims to uncover biological interactions that can be used as a tool to predict chemotherapy response in breast cancer. Ariane Watson, a Marie Curie postdoctoral fellow, presented a poster of her recent work on how different combinations of genetic changes can impact cancer. If certain mutations never occur together in the same tumour, it might mean that together they are harmful to the cancer cell - called synthetic lethality. "If we can identify relationships such as these, they can be exploited to develop new treatments", explains Ariane. Her work focused on systematically identifying patterns of mutations in cancer-related genes and she found several that appear to be synthetic lethal. While still in the early stages, Ariane’s work could uncover previously unrecognised genetic interactions in cancer and potentially open up new therapeutic avenues.

Walter Kolch, Director of SBI, hosted a table at the Networking Event organised by the IACR Junior Council.  This event brings together experienced researchers with young scientists for an informal chat about careers in science and research. With the broader variety and more options of research and research careers now available, such important decisions become even more difficult to make. Talking to colleagues who have a rich work experience in different environments helps find answers to career questions of junior researchers.

Recognition of the quality and importance of Irish cancer research is growing. The Irish Times, reporting on IACR 2018, highlighted that ongoing cancer research in Ireland is vital given that the numbers of cancer patients here is set to rise by 90 % by 2040*. Minister for State John Halligan referred to this in his speech at the IACR Junior Researcher Career session:

‘‘We know that knowledge derived from research is paramount in providing evidence base for better health policies, practices and systems’

The research featured at IACR 2018 represents the high quality, high impact work conducted in SBI that continuously strives to further our understanding of tumour biology and uncover new therapeutic targets to combat the ever increasing problem of cancer.