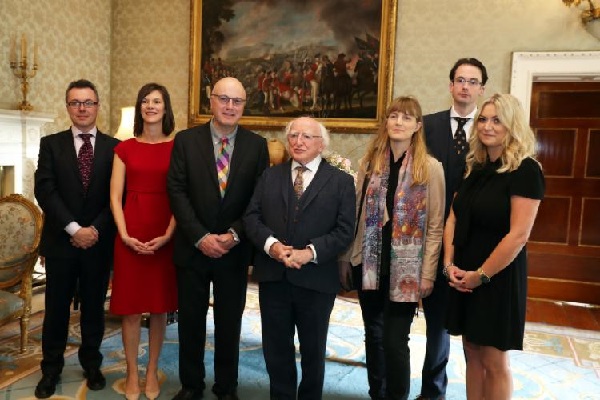 President of Ireland, Michael D. Higgins, honoured the recipients of the SFI President of Ireland Future Research Leaders Award at a special ceremony in Áras an Uachtaráin in Dublin recently. Five awards, representing a €7 million investment, will also support the additional recruitment of 15 research positions. Research supported by the awards will examine novel drug targeting for the treatment of multiple sclerosis and obesity-related diseases, regenerative medicine, immunology, tissue engineering, protein engineering, and memory storage in amnesia.

A passionate political voice, poet and academic, President Higgins has been a long-standing advocate of inclusive citizenship and creativity, highlighting not only the positive contribution of science to society, but also the links between the creativity of artists and the innovation of scientists. Equally, the President has stressed the importance of placing scientific research in a clear social, cultural and ethical context, saying that the benefits of scientific advances should be spread as widely as possible.

Among the awardees was SBI & UCD's School of Medicine. Dr Christina Kiel, who has been recruited from the Centre de Regulació Genòmica (CRG), Barcelona,whose research focuses on the structural analysis of signalling pathways and protein interaction networks relevant in human diseases, such as colon cancer and retinal degenerations.

Congratulating the awardees, Prof Mark Ferguson, the Director General of Science Foundation Ireland and Chief Scientific Adviser to the Government of Ireland, said “The President of Ireland Future Research Leaders Award is designed to attract to Ireland outstanding new and emerging research talent. In supporting these talented and innovative individuals, we are delighted to recognise early career researchers who have already displayed exceptional leadership potential at the frontiers of knowledge. The development of leadership skills in these researchers early in their careers is vital to ensure research and innovation in Ireland continues to progress. Our investment highlights the importance that Science Foundation Ireland places on supporting all stages of academic careers, and on the attraction and retention of star researchers.”