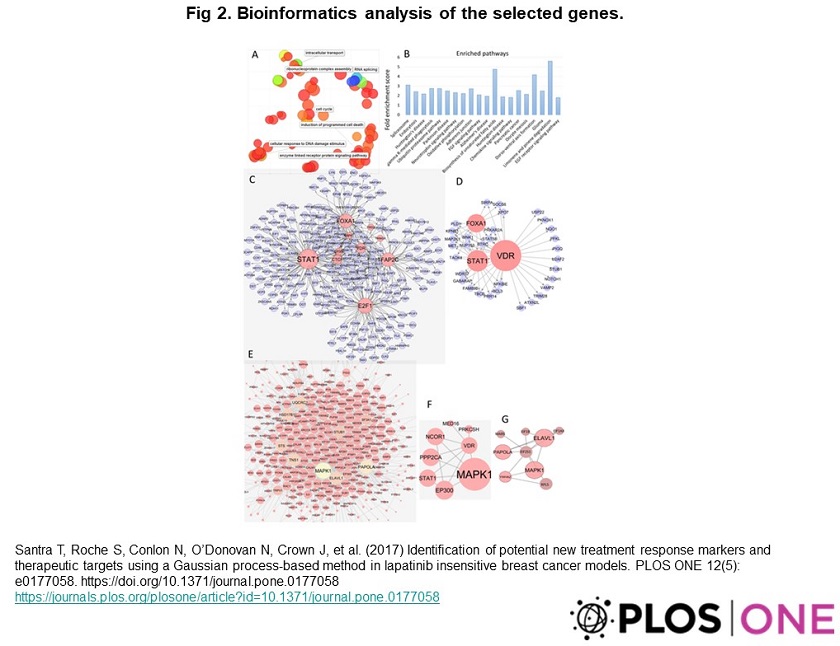 We analyzed ~ 1.056 million noisy, irregularly sampled, variable length time series, containing temporal expressions of ~22000 genes in four breast cancer cell models treated by placebo and two doses of Lapatinib. Two of these cell models respond to Lapatinib and the rest do not. The objective was to identify genes that responded to Lapatinib in the responsive cells but did not respond in the non-responsive cells. This amounts to performing n-way ANOVA on noisy, irregularly sampled, variable length time series data. To the best of our knowledge, there are no existing algorithm that can perform this analysis. So we developed our own algorithm called GEAGP which fits Gaussian Process (GP) models to individual time-series, uses the fitted models to compare time series profiles of each gene across multiple cell lines and treatment conditions, performs multiple test correction and uses a boolean logic model to filter desired sets of genes. The results of above analysis were then vetted against existing drug response, protein interaction, transcriptional interaction and gene ontology databases, leading to a small set of biomarkers which may be useful in predicting Lapatinib response in breast cancer patients.

Furthermore, we used Cox-regression on patient survival data to show that the expressions of some of the genes identified in the above study have significant correlation with the survival of different groups of breast cancer patients. Vitamin D receptor (VDR) which is activated by Vitamin D intake is one of these genes. In follow-up biochemical experiments we found that some of the breast cancer cells which do not respond well to lapatinib, may become more sensitive to this drug if applied in combination with vitamin D. These early results suggest that taking Vitamin D, an inexpensive food supplement that can be bought over the counter, may help breast cancer patients who have innate or acquired resistance to lapatinib.