Dr Ebhardt has been involved in multiple studies with a focus on pharmacological interventions in prostate cancer.

The research was motivated by a computational study in which the authors asked what is more important for drug resistance:

The computer model was trained on clinical data from patients with metastatic prostate cancer. The simulations highlighted that genetic background is more important than a 10x more effective drug. This surprising finding is rationalised with emerging pharmacological resistance mechanisms, e.g. a transport channel in the cell membrane actively transporting drugs out of the tumour cell. Taken together, the modeling suggests that drug combinations inhibiting more than two targets are necessary for effective treatment.

These simulations were based on pharmacological interventions available to prostate cancer patients which usually inhibit one of two established targets: androgen receptor signaling or the PI3 kinase pathway. Hence, new targets in prostate cancer treatment are warranted. In search of identifying new targets, Dr Ebhardt used a systems pharmacology approach screening the presence of an early metastatic prostate cancer model for response to treatment of six drugs which are either used in the clinic today or target proteins important for prostate cancer progression.

The response to treatment was quantified on the molecular level. Dr Ebhardt used mass spectrometry to quantify the molecular phenotype of proteins. The results show that there is a uniform response in the molecular phenotype across the panel of drugs used in the study. One of the response mechanisms is the up-regulation of adaptor proteins called 14-3-3. This mechanism is not only observable in the immediate response to drugs, but a higher incidence of gene amplification and of mRNA level increase of a particular 14-3-3 protein (YWHAZ) have been observed in advanced metastatic prostate cancer patients when compared with early localised prostate cancer patients.

Based on these findings Dr Ebhardt leads a follow-up project investigating the role of 14-3-3 proteins in prostate cancer. Using computational modelling of protein-drug interactions, the researchers led by Dr Ebhardt found that docetaxel, a chemotherapy agent commonly used in current prostate-cancer treatment regimes, not only interacts with the cell’s cytoskeleton (the previous established target) but also with 14-3-3 proteins. Docetaxel may be so effective in prostate cancer because it targets the cell's microtubles, which are necessary for rapid growth, and also because it targets 14-3-3 protein YWHAZ, which is recurrently amplified in patients and is involved in cellular response to drugs.

Future research is needed in this field. Dr Ebhardt plans to follow up on other intriguing common mechanisms to pharmacological intervention found in prostate cancer. Alternative approaches of reducing amounts of target proteins are explored https://www.nature.com/articles/d41573-019-00043-6 which might be extremely useful for reducing amounts of 14-3-3 proteins in metastatic prostate cancer models. 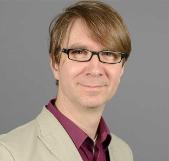 About the author:
H. Alexander Ebhardt obtained his Ph.D. in Molecular Biology and Biochemistry from Simon Fraser University, B.C., Canada investigating endogenous and exogenous small RNAs in a virally infected system. He began working in SBI in 2016.