Breast cancer is the most common cancer in women worldwide. In Ireland, around 2,600 women are diagnosed with breast cancer every year resulting in about 660 deaths.

In a recent publication, scientists from SBI and Conway Institute together with researchers from RIKEN Center for Integrated Medical Sciences have explored signalling and metabolic pathways that trigger phenotypic changes in breast cancer cells in response to external cues.

Using the MCF-7 cell line, a well-established in vitro model for studying breast cancer, the authors were able to identify the PI3K-mTOR axis as the major signalling pathway controlling these changes, including the massive production and accumulation of lipids.

More detailed analysis revealed kinases of the Src family to be required both for activation of this pathway and lipid accumulation. Interestingly, enhanced Src kinase activity is often associated with breast cancer development. 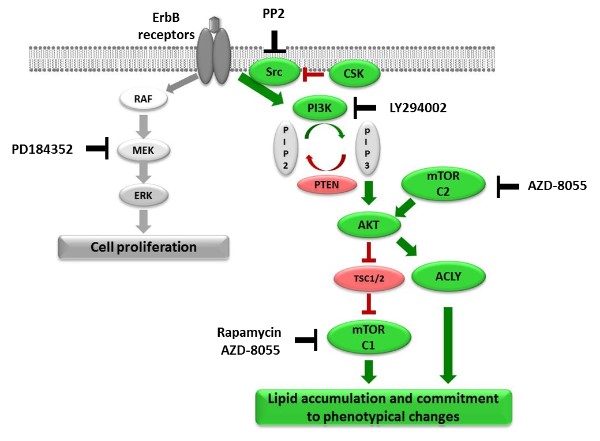 ATP Citrate Lyase is know to be activated in several types of cancer and has even been suggested as a drug target in lung cancer. Based on the findings in this study, targeting of this enzyme might therefore be beneficial for breast cancer patients as well.In addition, relevant novel connections between the described phenotypic changes and metabolic alterations in cancer were discovered as ATP Citrate Lyase, a central linker between glucose and lipid metabolic pathways, was identified as a target of the PI3K.

Overall, this study describes molecular regulation of metabolic changes in breast cancer and the findings contribute to our understanding of this disease and potentially to identifying novel targets in its treatment.

Why read this paper? This paper presents an in-depth perspective on how completely opposing biological decisions (cell growth and death) can be achieved by the same molecular apparatus: the integrated MST2-Raf-1 signalling network. It sheds light on the general question of how biochemical signalling pathways generate biological specificity and demonstrates how mathematical modeling can be a great aid in this quest.

Why read this paper? Discovered about thirty years ago, the Raf Kinase Inhibitor Protein (RKIP) was the first reported endogenous inhibitor of the RAF-MEK-ERK/MAPK cascade. In this review, scientists from SBI and Kuwait University describe the molecular mechanisms by which RKIP controls MAPK signalling at different levels.

Why read this paper? The duration of ERK signaling activity can determine cell fate decision. Sustained ERK activation has been known to stabilize the protein products of genes that respond early to growth factor stimulation. However, the effect of ERK activity duration on mRNA stability is unknown. This paper analysed the time-course transcriptome induced by distinct ERK activity kinetics and found that sustained ERK activity associates with the lifetime of late response genes, but not early or mid genes.

Why read this book chapter? This chapter gives a comprehensive introduction into how to produce multiple sequence alignments using the Clustal Omega software. It covers alignment of unaligned sequences, refinement of alignments via iteration and the use of background information in the form of Hidden Markov Models as available from Pfam. It also explains how to select appropriate data and how to interpret the results.

Why read this paper? This paper comprehensively demonstrates for small numbers of protein sequences that evolutionary based phylogenetic trees are not good guide-trees for generating multiple sequence alignments that try to capture properties of crystal structure based alignments. It also shows that perfectly chained (caterpillar) guide-trees most often produce the best alignments. This result is surprising, as progressive alignment for the last decades has tried to emulate evolution, favouring more balanced guide-trees over imbalanced ones.

Why read this paper? Chronic kidney disease (CKD) is an increasing global public health problem; death numbers caused by end-stage renal disease (ESRD) have about doubled over the past 20 years.

In this study, researchers from Conway Institute and SBI examined the renoprotective effect of the vitamin D analogue paricalcitol (PC). They identified several novel pathways that are affected by PC treatment, which are associated with the progressive loss of renal function in CKD and may therefore be of importance in our understanding of both in the progression and resolution of renal fibrosis.

Natalia Volinsky, an alumnus of SBI, is currently head of the Cardiovascular Research Lab at The Baruch Padeh Medical Center, Poria, Israel. While working in SBI herresearch focus was on the investigation of signalling networks and their link to metabolic pathways downstream to Receptor Tyrosine Kinases in breast cancer cells.

Nora Rauch is a postdoctoral researcher at SBI interested in protein interactions in the oncogenic EGFR signaling network.

Jens Rauch is a Junior Group Leader at SBI. The aim of Jens' research and that of his team is to elucidate spatial and dynamic regulation of Raf/MAPK signaling by scaffold proteins and use this understanding to overcome tumour resistance mechanisms and enhance treatment strategies