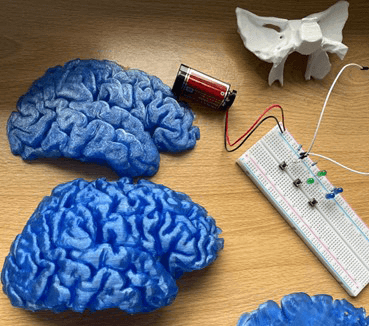 Knowledge of anatomy, at its heart, fundamentally requires an understanding of three dimensional structure. While examination of the actual human body remains the cornerstone of anatomy education, the approach has limitations in certain instances. Some anatomical structures are difficult or impossible to see in reality for practical reasons, such as embryonic development. Also, time available to students in traditional anatomy laboratory classes is limited, so additional supplementary resources can significantly enhance student learning. While textbook diagrams can be useful, they can require a lot of effort on the part of students to recontextualise in 3D. Commercially available 3D models can also be useful, but are generally expensive and limited in what models the manufacturers have available.

Several years ago we introduced a summer programme where medicine students were invited into the 3D printing facilities in the School of Medicine, where they worked to develop new 3D models for anatomy teaching. The success of that programme led to the development of this project.

While medicine students make up the largest cohort of anatomy learners, the full spectrum of students who learn anatomy as part of their programmes is more diverse, including radiography, sports science and biomedical engineering students. Each of these student cohorts brings a different set of experiences, prior knowledge and academic background to learning anatomy. Importantly, these students have the best understanding of their own educational needs. This project set about leveraging this diversity in student backgrounds to create new and innovative educational resources.

In this project, we set out to facilitate students to create their own educational resources, using 3D printing technologies. Specifically, we wanted to form teams of students from different disciplines to work together to create these models. Both medicine and biomedical engineering students have experience as anatomy learners, but their other educational experiences diverge significantly. By pairing medicine and engineering students in teams to work together to develop their own anatomical models, we hoped to take advantage of this difference to create an effective set of educational resources.

The end point of this process is to have new three-dimensional, physical educational tools that can be deployed across the spectrum of anatomy education in UCD. However, the approach we used would have additional benefits. First, these models would be student created – they would be created from a place of understanding of a learner’s needs that only a learner can truly have.

Second, the models would be informed by differences in the students’ academic contexts.  We worked on the assumption that, given the same problem, a medicine student and an engineering student would likely come up with different, but equally valid, solutions. By pairing different students we hoped to find synergies which would lead to valuable, novel educational resources.

Third, this process would allow interaction across disciplines. The ability to work and communicate with others from differing educational, professional and personal backgrounds is crucial in the modern workplace, and this is a skill that is somewhat underdeveloped in university where students spend most of their time within their own disciplinary silos.

Our initial plan was to invite the student teams in to use the 3D printing facilities in the School of Medicine to work on their projects. This would allow them access to the technical resources needed for the project, as well as allowing them to benefit from interaction and advice from academic staff with experience in both 3D printing and anatomy. This plan was put on hold due to COVID related restrictions in 2020. When it became apparent that the planned running of the project in spring 2021 would also be affected by the ongoing pandemic, we pivoted to a different approach. Instead of inviting the students into our 3D printing facilities, we purchased inexpensive consumer printers (Ender 3 3D printers) and sets of printing materials, and provided one printer and set of materials to each team to take home and work with.

The brief given to the students was broad – create a model that illustrates any aspect of anatomy. They were asked to draw on their own experiences as learners when deciding what to address in their model – to ask themselves what resources they wished they had when learning anatomy. We also asked them to draw from their own experiences from other parts of their own disciplines, as well as to be as creative as they wanted. The overall approach was to allow the students as much space,  freedom and flexibility as possible to achieve their goal of creating a model, and to turn the disadvantage of running this project during the COVID pandemic into an advantage.

Two models created as part of this process exemplify the value of this approach.

The first was a simple model of the developing human embryo at 20 days of gestation. To quote the student creators of this model

This is something that can be difficult to interpret and to visualise in order to fully understand when studying embryology, as the vast majority of diagrams or descriptions in embryology textbooks depict the folding from only one angle, giving a 2D image of what is obviously a three-dimensional structure.

The approach they took involved creating a model of a quartered segment of the embryo, which shows both the 3D structure, as well as the cross section that is typically represented in diagrams, thus allowing the learner to bridge the gap between 2D representations and 3D structure.

The second model was designed to illustrate another concept which was difficult to visualise – the regions of the brain supplied by the three major cerebral arteries. In this case, the students created a 3D model of a brain printed in a translucent material. Within this model, they placed LEDs connected to switches, with each switch corresponding to one of three arteries. Pressing each switch causes a region of the brain to illuminate, showing the part of the brain that receives its blood supply from that artery. This simple but effective interactive element greatly enhances the utility of this model as an educational tool.

The experience of the students is best summarised by this quote from one of the participants:

This was a unique opportunity that we are both delighted to have had to chance to participate in and we have both learned a lot outside of the ream of our core degree programmes. We are really grateful to have had the chance to use and learn about technologies which are going to become more and more relevant in both of our respective areas of medicine and engineering in the coming years as their capabilities are explored and applied to new uses. In addition to the actual 3D printing, it was great to work on a project with a person from another course, who then had different interests and skills to bring to the project. We both learned from each other and again, it was something a bit out of the ordinary for us to work on together.

It is apparent that the process of actually creating the model has significant benefits for the student which may indeed outweigh the benefits to other students of having access to the model. With this in mind, we have begun trialing simple model making into the curriculum in the medicine programmes to allow every student to access these benefits.

3D printing can be daunting to novices, but the hardware required has become cheap and accessible in recent years. The Innovation Academy in UCD operates a makerspace equipped with several 3D printers and other tools.

Several publicly available resources for 3D printable models which can be freely downloaded are available (https://www.printables.com/, https://3dprint.nih.gov/ ) and can be a great jumping-off point for developing 3D models for education.

3D design software can also be difficult for inexperienced users, but Tinkercad is a free, easy to use, browser based editor that’s very beginner friendly.