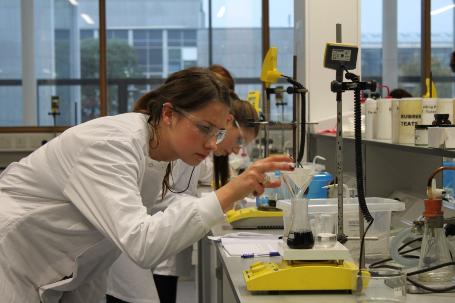 The School of Chemistry and Chemical Biology delivers general (level 1-2) laboratory courses to over 2000 students each year – resulting in over 9,000 individual student experiments being carried out. These are spread between specific courses for science majors and service courses for agriculture and engineering students.

The lab sessions are generally the most interesting and exciting part of the module where students get hands on experience in designing an experiment collecting and analysing data, determining a result and putting the result into context within the discipline. They also develop teamwork skills and have an opportunity to discuss experiments and the course with other students, graduate demonstrators and technical and lecturing staff in a relaxed atmosphere.

Up until recently, students in these modules came to a pre-practical talk at the commencement of the lab where a lecturer introduced them to the principles behind the lab experiment, the mechanics of carrying out the experiment and the data treatment required to generate an answer, and ensured that students are familiar with the safety aspects of the experiments. They then progressed on to the lab where the demonstrators essentially repeated the salient points of the information and got them working on the experiment.

One of the issues associated with this approach is the passive nature of the preparation that students undertake prior to the lab session. They essentially attend a lecture and move on to carry out an experiment under the direction of the postgraduate demonstrator. The result oftentimes is that the student carries out the experiment detailed in their manual treating the exercise as a “follow-the-instructions-by-rote” exercise which turns out to be less valuable in terms of student experience and in the fulfilment of learning outcomes that it could be.

The principal aim of the work carried out (with the support of funding through a Module Support Innovation Grant funded through the HEA’s SIF II, Enhancement of Learning project) was to encourage engagement of the students with the work they were going to be carrying out during a particular session before they arrived to the lab, and in this way change the practical sessions from a mostly-by-rote exercise to a far more planned and active learning exercise.

To encourage this we have developed a series of on-line resources that students are required to study before they attend the lab. These resources are placed in a “Laboratory Classes” tab on the relevant the virtual learning environment site and become available in the week before the laboratory session is timetabled.

The major section of this uploaded material consists of a document which contains details of the laboratory experiment that is to be carried out. These details include;

Videos and animations were taken from several educational and interest sites on the internet including the resource section of the Royal Society of Chemistry. Each of these documents takes about 15 minutes to fully read.

Once the students have downloaded and read the document, looked through any of the linked videos and studied the worked examples of data analysis etc. they are asked to complete a short test that asks then to complete simulated data analyses, or give some information about either the mechanics of carrying out the experiment or the chemical principles underlying the experiment. This quiz contains a selection of randomised questions from a test bank. The purpose of this is to decrease the likelihood plagiarism. The test normally takes less than 5 minutes to complete.

The student submits their test and receives a number grade as feedback. They then have a second opportunity to take the test (where different questions from the test bank may be presented) before submitting a gradable version. The grades from this quiz form part of their overall grades for the laboratory component of the module.

The online information material remains available on the virtual learning environment for the period of the lab session (1-2 weeks) but the online test is removed as the first lab session gets underway, i.e. students need to complete the test before the 1st lab session of a given rota.

The pre-lab test has now been running for 4 years in an elective module for stage 1 science students (CHEM10040 – The Molecular World) and for 2 years in a core module for stage 1 engineering students (CHEM10030 – Chemistry for Engineers). To judge its effectiveness in promoting engagement and student learning we can look at several aspects including material download rates, quiz completion rates, student feedback (they are specifically asked about this feature in their online feedback and also in previously-run paper feedback exercises), student laboratory grades and overall module grades and lecturer, demonstrator and laboratory technical staff feedback.

Comparing module and component grades over the periods before and after this project began is not straightforward since there has been considerable changes to the incoming cohorts in this time, i.e. the entry points for students coming to the first science module have increased by over 200 and this is reflected in far improved overall module and component grades which cannot be linked to the presence of these on-line practical resources. In general, the feedback from the students has been generally positive (with over 80% of respondents saying that the exercise improved or greatly improved their engagement with (and understanding of) the lab sessions.

Last year (2012) the level of completion of the pre-lab quiz sections of the material was over 90% in both modules and the numbers of students accessing the on-line material before coming to the each lab session was over 93%.

Lecturers, demonstrators and lab technical staff experience suggests that the students are now far more aware of their aims during the lab session, the lecturer-led pre-lab talk is curtailed to (for the most part) the safety aspects of the experiments and student problems with data analysis and report preparation are lessened.

The initial setting up of the on-line version of a module’s laboratory course is a time consuming process but its maintenance and upgrading as lab sessions evolve and change is relatively straightforward. The school is considering expanding this approach to a greater number of stage 1 and 2 modules as we move to our refurbished teaching space in September 2014.