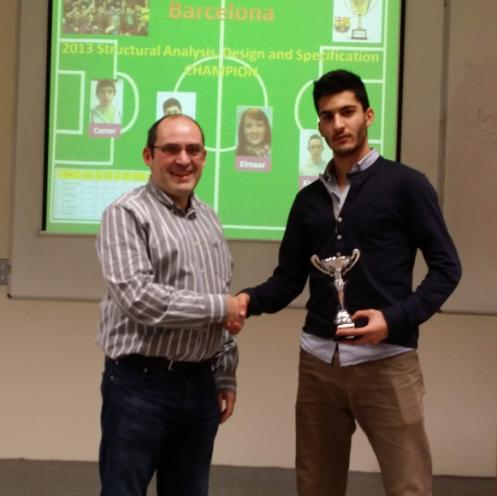 In some scenarios, the time constraints of modularization have become an impediment to the successful achievement of learning outcomes. The latter has been noticed in structures-related civil engineering subjects where the nature of the material requires a maturation time in the student’s mind before being fully understood. This project aims to develop highly efficient group activities that will help students to meet their learning outcomes in traditionally difficult subjects. A form of cooperative learning known as Team Game Tournament (TGT) is employed for this purpose. TGT enhances learning via the establishment of a tournament where the class is divided into teams that play against each other. The principle behind TGT is that the success of a team lies on the success of the individuals composing the team. Therefore, team mates help each other and study more than individually because they care for them and for the team. A variation of TGT inspired by the UEFA ‘Champions League’ is designed for three structures-related modules in the academic season 2013/14 by the first time.

The main objectives are:

More details can be found in:

Gonzalez, A., Jennings, D. and Manriquez, L. (2014) 'Multi-faceted Impact of a Team Game Tournament on the Ability of the Learners to Engage and Develop their Own Critical Skill Set', International Journal of Engineering Education, 30(5):1213-1224.

Student learning and satisfaction are enhanced via a novel form of learning that uses competitive teamwork resembling the ‘Champions League’. The competition combines the benefits of cooperative learning together with the high levels of engagement achieved by students in games and sports. The class is divided into a number of small academically balanced teams that play against each other. A game between two teams consists of posing questions (one question per team player) to the opponent team and answering the opponent’s questions. Students are held accountable for their own questions and answers, and also help and learn from their team mates as they want their team to win. Students are rewarded according to their individual performance as well as their team performance based on an overall classification. It has been noticed that the more games between the teams, the more effective the team work and learning has become. The competition has been set up as the ‘Champions League’, but this could also be extended to any competition that would be engaging for particular student cohorts.

During the tournament, students have shown to be very focused and participative and no less importantly, they have enjoyed themselves. In the three modules under investigation, there are end-of-semester exams that represent 80% of the overall grade. As a result of the experience, the average exam score have increased by 7.9%, 5.1% and 4.8% in CVEN30150 (3rd year Elasticity), CVEN30020 (3rd year Analysis of Structures) and CVEN40150 (4thyear Structural Analysis, Design and Specification) respectively, compared to the previous academic season.

Student feedback has been very positive. Some comments are reproduced below:

“Champions League was very enjoyable and really helped our learning”

“Champions league made me work harder, and made me aware of what I was falling behind on”

“I have a keen interest in the Champions League, so the theme was very entertaining. The idea of competing against someone while also being able to work as a team was thrilling. Strongly recommended!”

“Very enjoyable + I feel I am learning a lot more”

“I love the Champions League”