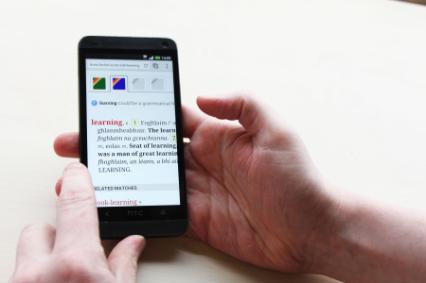 Many teachers of Irish like myself are persecuted by the very bilingual dictionaries they cherish. Students have a tendency to use these reference works a bit too zealously, often making no distinctions between the different kinds of lexicons and then grabbing the first word that seems to do the job, regardless of context, register, or usage. This becomes a significant problem at third level with students transitioning from relatively informal Leaving Certificate Irish to the higher registers of academic writing. Forced for the first time to write the language in a ‘high-brow’ style, dictionaries become more misused than ever and teachers are variously horrified or amused by the resulting translation clangers.

Portable, authoritative dictionaries are needed to help students negotiate problems of translation, as are practical methods of instruction on how to use the right resources. Up until now, the two most important bilingual dictionaries (English-Irish Dictionary and Foclóir Gaeilge-Béarla) were only available in print and their sheer size made them impractical in most settings save certain classrooms. A potential solution came to light a few months ago when, for the first time, the two works were made available on-line at breis.focloir.ie

The were a number goals in developing this course. Firstly and most importantly, I wanted to make the students aware of the on-line resources available to them and the various virtues that each resource has. This involved not only showing students the latest on-line dictionaries on the focloir.ie website (this was news to most), but also exposing the potential flaws of the most commonly used electronic resources: Google Translate and the (much abused) terminology database at www.focal.ie The idea here was to give them a more nuanced understanding of their own language needs and of the development of the language itself.

I also wanted the students to be comfortable and efficient at using these references works. Ideally, they will be more sensitive to the processes of translation in essays and articles and more appreciative of the various linguistic registers they use.

Another aim of the course was simply to attend to the students' reading habits and technological strengths. It’s impossible not to notice how often mobile phones are pulled out during lectures and classes, or how much text the average student parses on their phone every day. This seemed like a fruitful starting point.

The first four weeks of the course were dedicated to exploring on-line language resources in the lecture theatre and in the classroom using the students’ smartphones. (It was something of a surprise to me when around 99% of the students in the lecture theatre responded that they owned a phone that could connect to the internet – still, one phone between two or three would work just as well.)

The first half hour of the lectures were spent showing on the lecture theatre’s computer the strengths and weaknesses of the four major resources: English-Irish Dictionary, Foclóir Gaeilge-Béarla, New English-Irish Dictionary (all of which are housed at www.focloir.ie) and finally the www.focal.ie database. Discussions were framed in a context of basic translation theory, examining ideas of equivalence, cultural context and the difference between terms and words.

The second half of the lectures were then spent in group exercises. The students were given deliberately ambiguous sentences to translate together using the dictionaries, ranging from excerpts from Harry Potter to pieces on nautical terminology and trade unionism. The lectures are paired with smaller tutorials during the week, so further, more in-depth practice is done there.

The introduction of the smartphone into a lecture theatre with 100+ first year students seemed risky but so far the response has been very positive. On feedback forms, the vast majority of students agreed on four key points:

My own impressions back this up. The dynamic in the lecture theatre is very good. The students obviously enjoy learning practical, concrete skills that aren't completely out of touch with their daily social-networking habits and they are getting hands-on experience with the most important reference works in the language. Some of the energy definitely hinges on the novelty of it all, but still, to my knowledge it's the first of its kind in any Irish department and it successfully tackles the most common problem in academic writing at undergraduate level.