Argument Roadmap for the Referendum on the Eighth Amendment 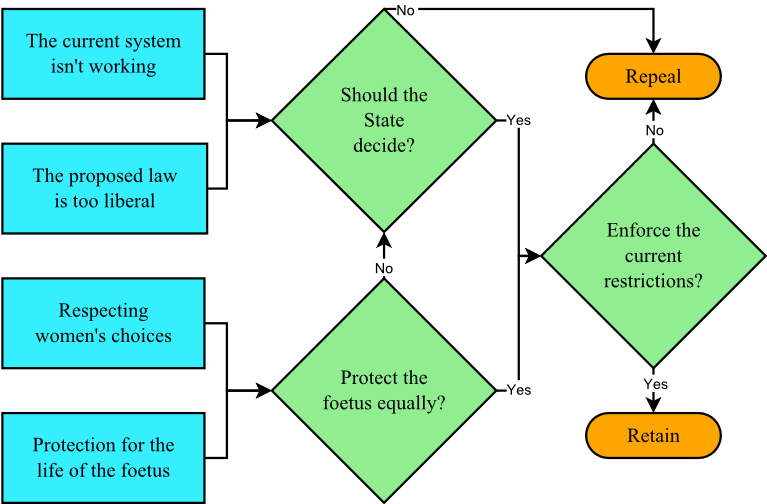 How to use the Argument Roadmap

The point of the Roadmap is to help people understand the debate about the Eighth Amendment. Just as a literal roadmap doesn't tell you where to go, but shows you how to get from one place to another, this Roadmap is meant to help see what kinds of arguments can be used to get you to a particular position. We hope that it will help you get a better idea about where your own views may fit into the debate, and to become clear on what questions you need an answer for if you want to defend your position. In the same way, you can use the Roadmap to understand the views of other people better, by seeing what path may have led them to the position they occupy, and what the forks were on the road that took them there.

To find yourself on the Roadmap, take a look at which of the starting boxes (the four rectangles on the left) seems most appealing to you. Click on the link in the sidebar that matches up with that box and see the reasons in favour of using that as your starting position, and also the reasons against that starting position. Take a look at the question at the bottom, which is meant to tie these points together into a single, clear issue. If you find the question to be too uncomfortable, try out one of the different starting positions and see if that fits your views. If you think you can give a convincing answer to that question, you can move along the flowchart to one of the decision boxes.

The decision boxes are two competing proposals to the same issue. Each of the proposals has a list of reasons why you may agree with it, and also reasons why you may disagree with it. Many of the reasons to agree with one proposal are also reasons to disagree with another one, but not all of them: some points are only going to matter to people who are considering a particular proposal. Again, at the bottom of each proposal is a question which is meant to tie the various points together, and again, if you think you have a good answer to this question, you can follow the arrow along the flowchart to the next box. Keep doing this until you reach the end-point: a decision either to vote in favour of repealing the Eighth Amendment, or a decision to vote against repeal and instead to retain the Amendment.

If at any point you feel like you're being swept along by reasoning you're not comfortable with, feel free to backtrack and try a different path. This is a difficult topic, and bitter experience tells us that it isn't an easy one to navigate. In the same way. instead of beginning at the left-hand side with the starting positions, you can jump straight to a decision box and work backward and forward from there to better understand. You can also jump straight to one of the end-points and work backwards to see how someone can come to support that position.