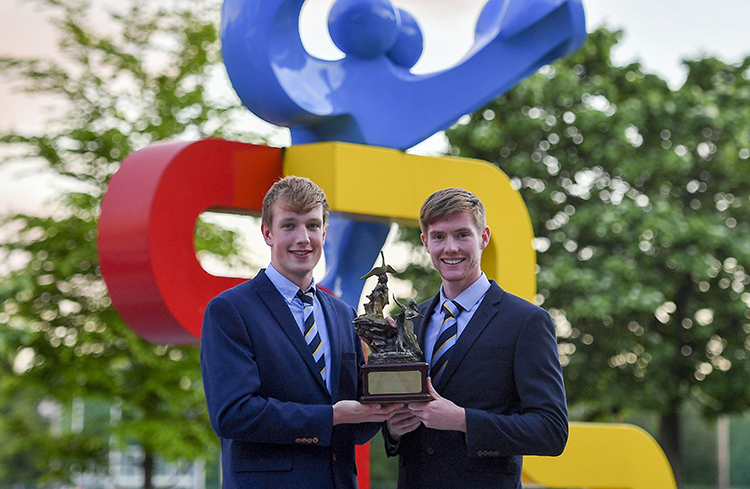 Talented rowers Shane Mulvaney and David O’Malley have been named ‘Sportspersons of the Year’ at the 2019 UCD Sport Awards.

The pair made a big splash at the World U23 Rowing Championships in July winning gold in the men’s 2000m lightweight pair.

The oarsmen, who study chemistry and medicine respectively, are the first ever Irish team to win gold at the championships.

Over 380 students from 21 different sports clubs were honoured at the Bank of Ireland UCD Athletic Union Council Sports Awards for their achievement over the last twelve months.

“[The] fact that we have so many students from so many clubs who are not only triumphant at Intervarsity level, but many others taking on the cream of competition nationally and internationally, underlines the quality of our sportsmen and women."

David O’Malley & Shane Mulvaney were awarded the Dr. Tony O’Neill Sports Person of the Year. After a phenomenal season we are so delighted to have our athletes and sport recognised on such a platform. pic.twitter.com/kwXoAtgaht

Alongside Shane and David being named as the ‘Dr Tony O’Neill Sportsperson of the Year’,  a number of other special awards were presented to several UCD clubs and sportspersons.

For a second year in a row, the Ladies Hockey Club was named the ‘Elite Club of the Year’ in recognition of their success on and off the field.

The squad retained their status as all-Ireland Intervarsity hockey champions after they took the Chilean Cup title for the fourth consecutive year.

The Men’s Airtricity League Premier Division team were named the ‘Elite Team of the Year’ following their promotion from the First Division.

An incredible night for the UCD Karate Club! Due to the efforts of our members and the incredible performances throughout the year, our club was awarded the Club of the Year (Varsity) Award during this year's Bank of Ireland UCD Sports Awards 2019. Dreams do come true! pic.twitter.com/wwedYo6aol

Sam Totterdell of the UCD Tennis Club was presented with the ‘The Gerry Horkan Club Administrator of the Year’, while Men’s Boat Club’s senior treasurer and coach Niall Farrell was the recipient of the ‘Bank of Ireland Graduate of the Year’ award.

The UCD Mountaineering Club received the ‘Bank of Ireland Club Inclusion Award’, and the UCD Volleyball Club were awarded ‘Event of the Year’ for hosting the 2018 Irish Volleyball Intervarsities and 2019 club Blitz.