Photoreceptor light acceptance is closely tied to the Stiles‐Crawford effect of the first kind (SCE‐I). Whether the SCE‐I plays a role in myopic development remains unclear although a reduction in directionality has been predicted for high myopia. The purpose of this study is to analyse the relationship between foveal SCE‐I directionality, axial eye length, and defocus for emmetropic subjects wearing ophthalmic trial lenses during psychophysical measurements and for myopic subjects with their natural correction. 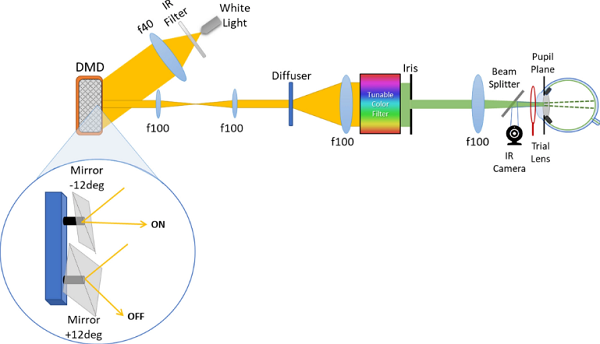 A novel uniaxial flicker system has been implemented making use of a Digital Micromirror Device (DMD) to flicker between a 2.3 visual degrees circular reference and a set of circular test patterns in a monocular Maxwellian view at 0.5 Hz. The brightness of the test is adjusted by the duty cycle of the projected light to an upper limit of 22 727 Hz. The wavelength and bandwidth are set by a tuneable liquid‐crystal filter centred at 550 nm. A total of four measurement series for 11 pupil entrance points have been realized for the right eye of 6 emmetropic and 10 myopic subjects whose pupils were dilated with tropicamide. Five of the emmetropic subjects wore ophthalmic trial lenses in the range of −3 to +9 dioptres to mimic hyperopic to highly myopic vision and resulting visibility plots have been fitted to a Gaussian SCE‐I function. In turn, the myopic subjects wore their natural correction during the analysis of the SCE‐I. All subjects had their axial eye length determined with an ultrasound device.

The study confirms a clear link between SCE‐I directionality, uncorrected defocus, and axial eye length. This may play a role for emmetropization and thus myopic progression as cone photoreceptors capture light from a wider pupil area in elongated eyes due to a geometrical scaling.