For the first time, an international team of astronomers including Dr. Morgan Fraser from the School of Physics at University College Dublin, have directly imaged the formation and expansion of a fast-moving jet of material ejected when the powerful gravity of a supermassive black hole ripped apart a star that wandered too close to the cosmic monster. The new findings have been published in a paper in the prestigious international journal Science, led by Prof. Seppo Mattila of the University of Turku in Finland and Dr. Miguel Pérez-Torres from the Institudo de Astrofisica de Andalucia in Spain.

The team of scientists tracked the event with radio and infrared telescopes, in a pair of colliding galaxies called Arp 299, nearly 150 million light-years from Earth. At the core of one of the galaxies, a black hole 20 million times more massive than the Sun shredded a star more than twice the Sun's mass, setting off a chain of events that revealed important details of the violent encounter.

Only a small number of such stellar deaths, called tidal disruption events, or TDEs, have been detected, although scientists have hypothesized that they may be a more common occurrence. Theorists suggested that material pulled from the doomed star forms a rotating disk around the black hole, emitting intense X-rays and visible light, and also launches jets of material outward from the poles of the disk at nearly the speed of light.

Continued observations with a world-wide network of radio telescopes, carried out over nearly a decade, showed the source of radio emission expanding in one direction, just as expected for a jet. The measured expansion indicated that the material in the jet moved at an average of one-fourth the speed of light, and allows astronomers to begin to understand the energy source that powers these events.

Describing the observations, Fraser explains "It was very clear from the outset that we were dealing with an exceptional and unique event. But it went on to take us over a decade of observations with telescopes around the world to be certain that we were actually seeing a black hole devour a star. Now we understand the nature of this event, we look forward to finding similar phenomena in future, using upcoming all-sky surveys such as the Large Synoptic Survey Telescope. And with Ireland set to join ESO in the near future, it's a very exciting time for astronomers at UCD - who will be able to take an active role in the hunt for other tidal disruption events." Fraser's research is supported by Science Foundation Ireland, through a Royal Society - SFI University Research Fellowship. 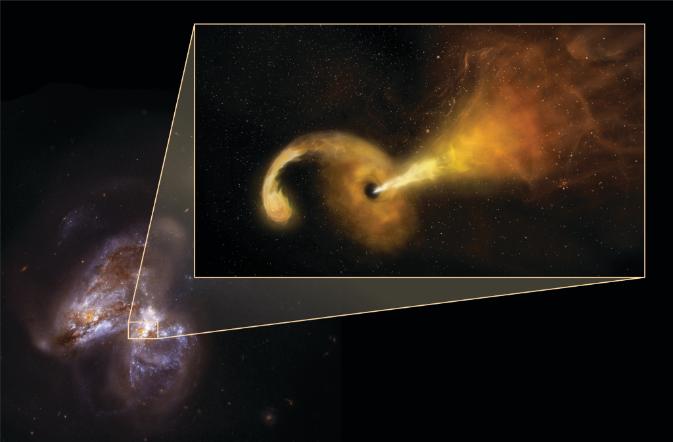 Artist conception of a tidal disruption event (TDE) that happens when a star passes fatally close to a supermassive black hole, which reacts by launching a relativistic jet. It zooms out of the central region of its host galaxy, Arp299B, which is undergoing a merging process with Arp299A (the galaxy to the left).