In a new paper published in the journal Nature Astronomy, a team of astronomers have managed to catch the first flash of light from an exploding star. The research was led by Dr. Francisco Förster at the University of Chile; and included Dr. Morgan Fraser, a Royal Society - Science Foundation Ireland University Research Fellow at University College Dublin. The team used the four-meter Blanco telescope in Chile to repeatedly scan a small region of the sky, and managed to detect a handful of stars in distant galaxies at the moment they exploded as supernovae. 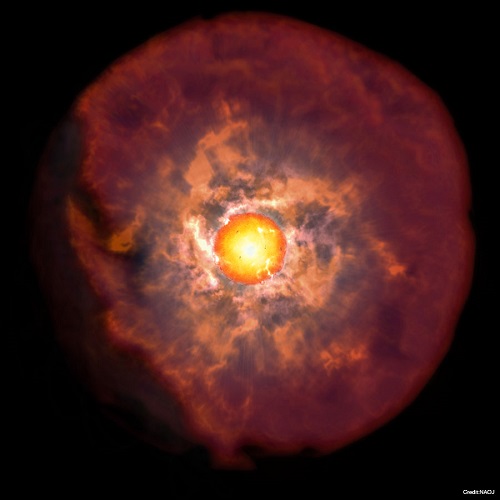 Supernovae are the explosive deaths of massive stars (these are more than about eight times the mass of the Sun). They are rare events, with one occurring on average only every fifty years in a galaxy like the Milky Way. But despite their rarity, supernovae play a crucial role in the Universe, as they create heavy elements such as calcium, iron and oxygen. These elements subsequently go on to form other stars, planets, and even people.

In their Nature Astronomy paper, Dr. Förster and colleagues observed how their sample of supernovae brightened during the first few hours after explosion. Using these observations, aided by computer modelling, they found that the majority of stars that explode are surrounded by so-called "circumstellar material". This circumstellar material comprises of gas shed by the star before it exploded. The presence of circumstellar material may suggest that massive stars undergo a brief period where they lose gas at an accelerated rate shortly before exploding.