SBBS graduate Ariane Watson is co-lead author of a paper published in Molecular Cell on February 17 describing a map of HIV infection that highlights genetic vulnerabilities during the infection process. The work was carried out while Ariane was a PhD student in Gerard Cagney's Lab, and involved scientists from the Gladstone Institute in San Francisco and the Mount Sinai School of Medicine in New York, and was led by Nevan Krogan.

A previously unknown link between an RNA processing enzyme complex and the innate immunity pathway was discovered, showing how the virus can manipulate the host's protein network. By identifying host factors that HIV depends on, potentially new therapeutic approaches that are less likely to lead to viral resistance can be investigated. Furthermore, the approach is flexible and could be adapted to other pathogens, including other viruses, bacteria, and parasites. 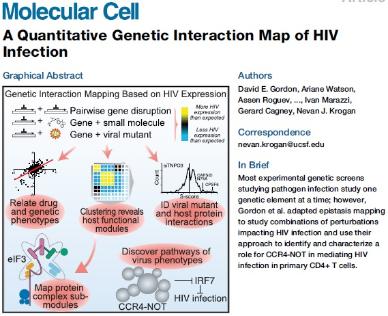