SBI at the Irish Association for Cancer Research Meeting

Last week a group from SBI attended the Irish Association for Cancer Research (IACR) meeting in Kilkenny. The IACR is an All Ireland association and consequently the conference is one of the major annual cancer research meetings on the island of Ireland. There were excellent talks from national and international speakers, ranging from those performing investigatory research to understand the function of cancer associated genes to those seeking to apply the latest discoveries and technologies in the clinic. 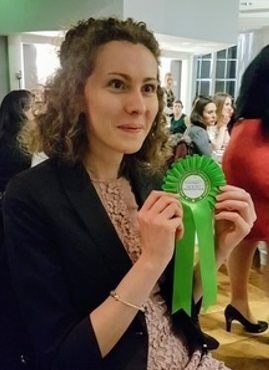 SBI was well represented at the conference, with poster presentations from Susan Kennedy, Zhi Liu, Dirk Fey and Tapesh Santra and oral presentations from Melinda Halasz, Jens Rauch and Colm Ryan. These presentations highlighted how systems biology approaches can be used to tackle a variety of problems of cancer - predicting which patients will respond to chemotherapy, understanding mechanisms of drug resistance, and identifying new drug targets in a number of different cancer types. SBI researchers presented work on breast cancer, colon cancer, melanoma, and neuroblastoma, highlighting the breadth of the cancer research performed here.

A particular highlight was Dr Melinda Halasz's presentation on the identification of drug targets in MYCN amplified neuroblastomas. Neuroblastoma is the most common form of cancer in infants and accounts for 15% of all cancer deaths in children. Children whose neuroblastoma tumours have many extra copies of the MYCN gene (i.e. they are MYCN amplified) have a particularly poor prognosis. Because of MYCN’s role in driving neuroblastoma tumour growth and its association with poor prognosis, it would be an ideal candidate for targeted drug development. Unfortunately, due to the shape of the MYCN protein, no one has been able to target it directly and consequently we need an alternative mechanism to target it. Melinda’s approach to this problem has been to identify the proteins that the MYCN protein works with in cancer cells and to target them instead. She has used this approach to identify a number of targets that selectively kill tumour cells with the amplified MYCN gene, suggesting they may be promising candidates for targeted treatments in neuroblastoma. For her work and excellent presentation Melinda won the best oral presentation prize at the meeting.

Colm Ryan is a Sir Henry Wellcome Postdoctoral Fellow based in Systems Biology Ireland and the Institute of Cancer Research in London. His research aims to improve our understanding of synthetic lethality treatments in cancer therapeutics.