The Pat McAdam Scholarship in Chemical & Bioprocess Engineering was established in memory of Pat McAdam, at the request of Martin McAdam, to celebrate and honour the life and work of his late wife, a much-loved teacher.

The purpose of the Pat McAdam Scholarship in Chemical & Bioprocess Engineeringis:

The Pat McAdam Scholarship carries a €4000 bursary and is awarded annually to a UCD Stage 2 Chemical & Bioprocess Engineering Student. The award is intended to support the recipient in undertaking a Research Internship, during the Summer at the end of Stage 2 (up to and including 2018), or Stage 3 (from 2019 onwards). 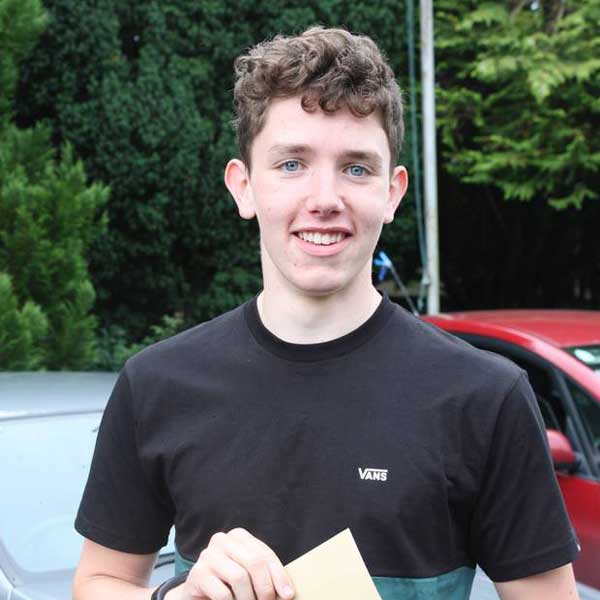 At the time of application in 2nd year, I was fairly new to chemical engineering and was curious about pursuing a career in research. The Pat McAdam Scholarship provided the perfect opportunity for me to explore this idea with the promise of working with state-of-the-art technology in a world-renowned laboratory. At the same time, it enabled me to travel to the United States, a country that I had long been dreaming of visiting. Unfortunately, the unforeseen global pandemic led to a halting of all international travel, leading me to head home to Malaysia instead. Despite the initial disappointment, I am glad to have the opportunity to work with Dr Veronica Sofianos here in UCD during the summer 2022. Her work on researching novel catalysts for water electrolysis to generate hydrogen is essential in this age where the world is shifting towards clean energy sources for a Net Zero economy. During this time, I was involved in the making of the nanocatalysts and was also able to work with advanced characterisation technologies such as scanning electron microscopes and transmission electron microscopes. Despite the short duration, this internship in her laboratory gave me insight into the life of an academic researcher and also helped me realise my interests in renewable energy technology.

Having just recently graduated in September 2022 with First Class Honours, I am now starting my career as a Process Engineer in PM Group. I would like to thank the sponsor for their generous donation in providing myself and other chemical engineering students the experience of a lifetime. I am also honoured to have been the first international student to have been awarded this award, it means a lot to my family and myself. 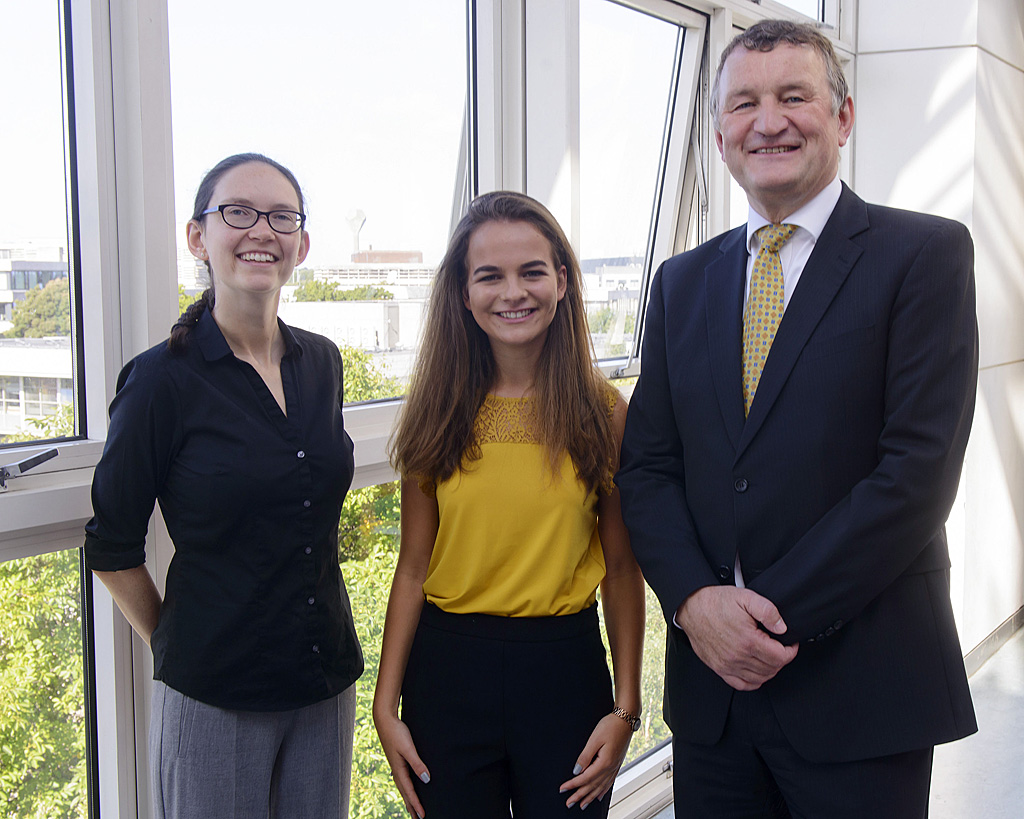 As the Pat McAdam Scholar in Chemical & Bioprocess Engineering 2018, Lucy Fitzgerald (Stage 2 Chemical & Bioprocess Engineering student 2017-18) spent Summer 2018 at the Colorado School of Mines, as a Research Intern, under the supervision of Prof. Colin Wolden. Lucy's research centred on a novel, membrane-based apparatus for small-scale ammonia production. Ammonia is currently primarily used as a fertiliser and, using the system Lucy was working on, individual farmers could, potentially, produce ammonia for use on their own crops. A wind turbine could be employed to separate hydrogen from water via hydrolysis. This hydrogen would then be fed to the catalyst, along with nitrogen, to be converted to ammonia at a temperature 450°C. The gas is then condensed, via cooling, before being spread on crops.  Due to increasing interest in hydrogen as fuel, there is also growth in research into ammonia synthesis. Lucy's work focused on optimizing the membrane, which consists of catalyst particles on a tubular support and through her experimental studies she identified a previously unreported, beneficial effect of oxygen on the catalyst activation energy, for yittria-stabilised zirconia (YSZ). Along with other Summer Research students, Lucy presented her findings on Development of Catalysts for Membrane-Synthesis of Ammonia to an audience of academic staff, industry experts and postgraduate students, at a poster session in the School of Mines.

While at Mines, Lucy had an opportunity to meet with Dr. Donal Finegan (UCD BE 2013, UCL PhD 2016) who, as the Pat McAdam Scholar 2011 was the first UCD student to intern at the Colorado School of Mines. Dr. Finegan, is now a Research Scientist at the US National Renewable Energy Laboratory (NREL) in Golden Colorado, where he leads  NREL-NASAl ultra-high-speed X-ray videographic experimental work, exploring lithium-ion cell design features during thermal runaway. For his work on lithium batteries, as part of his PhD studies UCL and subsequently at NREL-NASA, Dr. Finegan was awarded the IChemE Young Researcher Awards 2018. Meeting with a fellow Pat McAdam Scholar gave Lucy a valuable insight into research-related career paths and opportunities open to UCD Chemical & Bioprocess Engineering graduates.

Outside of the laboratory, Lucy explored the cities, towns and mountains of Colorado, culminating in a 4 day back-country camping trip in Gunnison National Park. In Lucy's words "The summer that I spent in Colorado was simply excellent. I made friendships which, I have no doubt, will last a lifetime and I have already begun planning my return for a week or two in August 2019. The experience has changed me as a person. I have developed hugely on a professional level, but even more so a personal level." 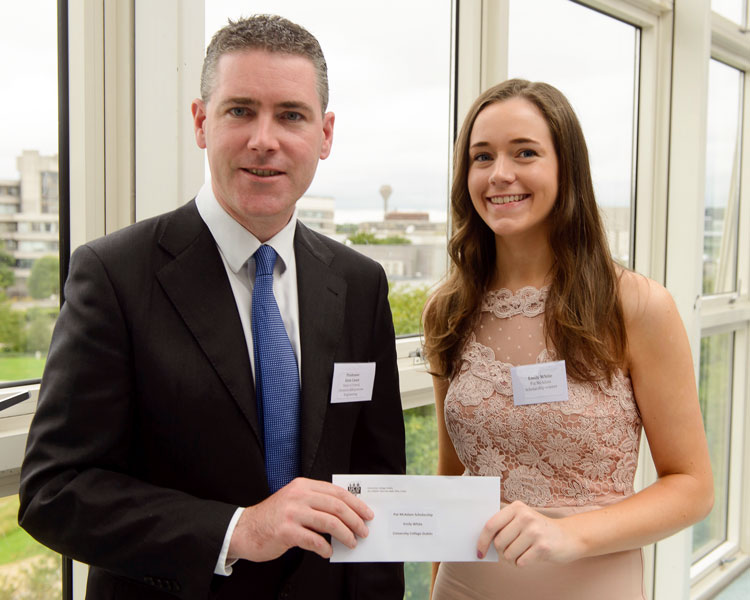 Emily spent Summer 2017 at the Colorado School of Mines, working under the supervision of Prof. Colin Wolden, in the area of solar cells materials. Cadmium telluride (CdTe) solar cells are currently the most popular type of photovoltaic (PV) solar cell. CdTe solar cells employ thin film semi-conductor technology, absorbing light and converting it to electricity. The commercial success to CdTe cells stems from their low production cost relative to their competitors and CdTe solar cells have the smallest CO2 footprint of all solar technologies. However, CdTe cells also have a number of associated disadvantages. Firstly, the toxicity of cadmium has caused public divide when it comes to the use of CdTe in renewable energy technologies. Secondly, the efficiency of CdTe cells is reduced by the transparency of a CdS window layer within the cell: a faint yellow complexion hinders the absorption of light by the cell, hence limiting the efficiency of electricity production. The purpose of Emily's project was to investigate the feasibility of using MZO (MgxZn1-xO), as a alternative to CdS, affording increased transparency and higher efficiency.

"The summer I spent in Colorado was undoubtedly the best summer of my life and an experience I will never forget. It was amazing to work on such a cutting-edge research project. The program was excellently organised and the attention given to each and every student was incredible. I was trusted to work by myself most of time and enjoyed being given such responsibility, considering I had no previous research experience. A real effort was made to make the summer beneficial for students who might wish to do postgraduate study. I am very thankful to Prof. Colin Wolden and Prof. Chuck Stone for taking such a genuine interest and providing me with fantastic support over the 10 weeks. I had never been away from home for a long period of time, nor had I travelled to another country on my own. This made the summer not only beneficial in terms of research and work experience, but also on a personal level it was hugely constructive. Finally, I would like to say how sincerely thankful I am to UCD and in particular, to Mr. Martin McAdam for supporting me with the Pat McAdam scholarship and enabling me to avail of this incredible opportunity." 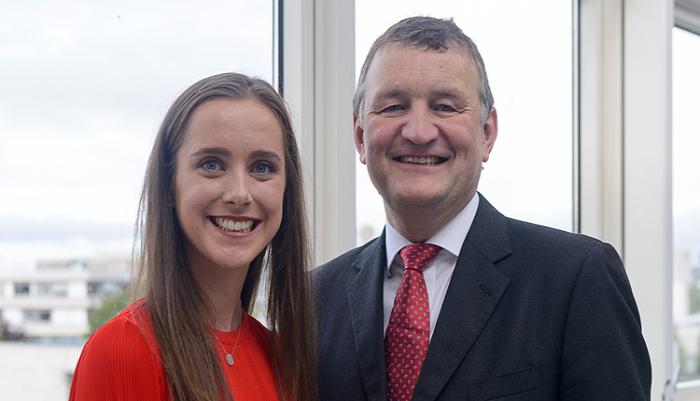 Alice has just (August 2016) returned to Ireland, after spending 10 “amazing” weeks at the Colorado School of Mines, where she was working under the supervision of Prof. Colin Wolden. Her research project focused on the synthesis and morphology tuning of alkali sulfide nanocrystals using alkali- metal- organic solutions and hydrogen sulfide gas. Alice, who was also awarded the UCD BE (Chemical & Bioprocess Engineering) Stage 2 Scholarship, will be undertaking her 3rd Year studies as a JYA student at the University of California, Santa Barbara. 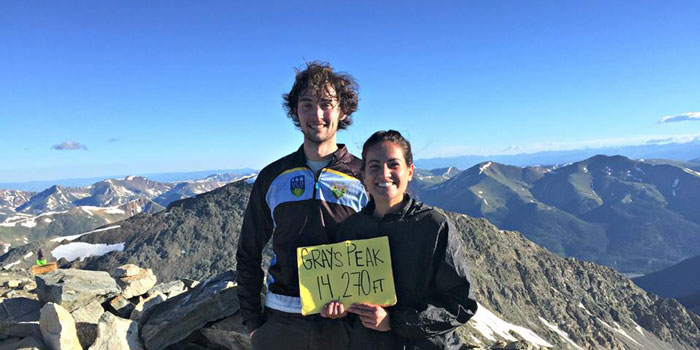 After completing his Pat McAdam Scholarship-funded Summer 2015 Research Programme at the Colorado School of Mines, Colm (shown here, with a fellow student, during a hiking trip in Colorado) enrolled as a JYA student at the University of Connecticut. He has now completed his 3rd Year studies, but has chosen to spend the 2016-17 academic year in industry, working as a Chemical Engineering Intern with FDT Consulting Engineers & Project Management Ltd. in Dublin. Colm will return to full-time studies in UCD in September 2017. 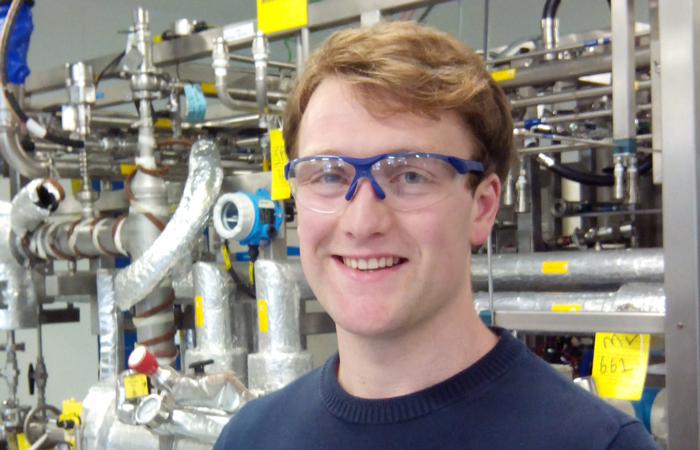 Before embarking on the Pat McAdam Scholarship-funded REU programme, in Summer 2014, Eoin had already secured a JYA place at the University of Colorado Boulder, where he spent the 2015-16 academic year, undertaking his 3rd Year studies. While in Colorado, he interviewed (via Skype) for a 1-year professional internship with Pfizer. He spent the 2015-16 academic year at the Pfizer Kilo Technology Laboratory (KTL), part of the Pfizer Global Process Development Centre in Ringaskiddy. Eoin returned to UCD in September 2016, for the start of his Final Year studies. 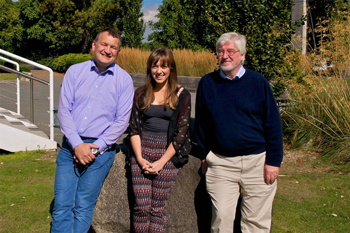 Immediately after returning from Colorado in late Summer 2013, Aisling was invited to participate in a 2-day ExxonMobil Engineering Challenge (EMEC) event in the UK. On the basis of her performance at that event, she secured a Summer 2014 Internship with ExxonMobil.  She obviously impressed her employers, as she returned to UCD in September 2014 with an offer of a place in the very competitive ExxonMobil Graduate Programme. The morning after her conferring Aisling (left) started work at the Fawley Refinery, where she joined the Europe Regional Project Centre as a project development and design engineer. 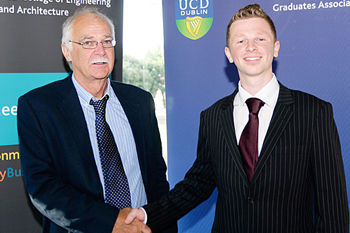 Karl spent Summer 2012 at the Colorado School of Mines. For Summer 2013, he secured a Process Engineering Internship with MSD at the company’s manufacturing facility in Ballydine, Co. Tipperary. He graduated, with a 1st Class Hons degree (ranked 1st in his class) in Summer 2014 and was accepted, on a full scholarship, to Cornell University. He was conferred with a Master’s degree from Cornell in December 2015 and, from a wealth of offers, both in the US and Ireland, Karl accepted a position on the MSD Graduate Programme. He’s now working at the Brinny Biopharama site in Cork. 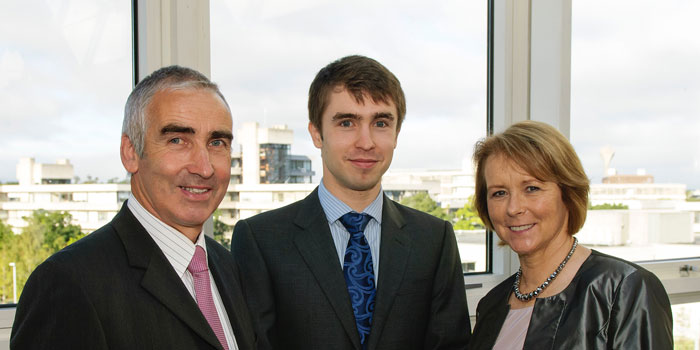 Donal, who was the first of the Pat McAdam Scholars to be accepted into the REU Summer Program at the Colorado School of Mines, proceeded directly from Mines to the University of California at Santa Barbara, where he spent the 2011-12 academic year as a JYA student. In Summer 2012, he was a Research Intern with Merck (MSD) at the company’s research HQ in New Jersey. He graduated, in 2013, 1st in his class, with a 1stClass Hons degree. He spent Summer 2013 as a Research Intern at the UK National Physics Laboratory. In September 2013, he commenced PhD studies in the Electrochemical Innovation Lab at University College London, investigating the use of advanced diagnostic techniques to identify features affecting the safety and  performance of commercial lithium-ion batteries. 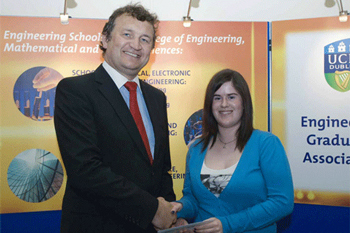 Winner of the 2010 Pat McAdam Scholarship, Rachel Moran is congratulated by Martin McAdam.

When the Pat McAdam Scholarship programme was initiated in 2009, it was always the intention to direct the award to Year 2 students, with a view to encouraging excellence in Chemical & Bioprocess Engineering amongst students at an early stage of their studies. Rachel was the first Stage 2 recipient. The Scholarship funded her as a Research Intern, within the UCD School of Chemical & Bioprocess Engineering in Summer 2010. In Summer 2011, Rachel interned at the Schering-Plough (now MSD) facility in Avondale. On graduation, in 2012, Rachel joined the MSD Graduate Programme  and subsequently worked at the Swords and Ballydine facilities. Since mid-2015, she has been a Process Engineer with Pfizer in Ringaskiddy. 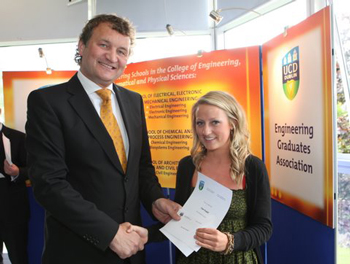 Claire, who graduated 1st in her class, with a 1st Class Hons degree was awarded the inaugural (2009) Pat McAdam Scholarship in Chemical & Bioprocess Engineering, based on this academic achievement. From UCD, Claire joined the Graduate Programme in Eli Lilly and achieved Chartered Engineer status, with the IChemE, in 2014.  She subsequently worked with Mallinckrodt, as a Senior Process Engineer. She has recently rejoined Lilly, where she is working as a Senior Engineer in the company’s new biopharma manufacturing facility.