Grace Fitzgerald, 2019 UCD Geology Graduate, talks to us about how she first became interested in geology, what the UCD degree was like, and what she has been up to since graduating. 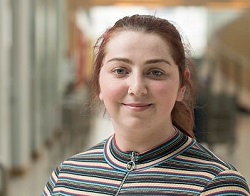 You graduated in geology from UCD in 2019. What have you done since graduating?

In my final undergraduate year at UCD, I applied for a masters because I wanted to do more in-depth research in the earth sciences. During the geology degree, I realized I really liked geochemistry and paleoclimate, and I applied to masters programs in those areas. I was accepted to a masters in Earth Science in Utrecht in the Netherlands. I've also been working part time in different research roles alongside my masters. At the moment, I work on a project that studies how plants and moving hillslopes interact. This involves looking at plant traits, such as root strength and root diameter, and, using GIS, studying how different plant species can survive different movement rates and stabilize moving hillslopes. It’s really cool to see that the geology undergraduate degree skills can actually be applied to a plant biology research role. I didn’t expect that. During my masters, I also worked as a technician at the Netherlands Institute for Oceans Research scanning core materials for geochemical profiles using XRF. At the moment, I’m planning to come back to Ireland to do my master's thesis project in UCD in the School of Earth Sciences.

What is your masters project about?

It involves studying pollution in the Avoca River in Wicklow, Ireland. One of the main ideas is to see if we can use biofiltration systems to treat different sources of contamination. I'd like to see if we can use a bivalve-based filter system to take out some of the toxic metal contamination in the river. In addition, I’ll be investigating which zones have which contaminants, and we're going to look at ways to clean it up. I actually grew up in Arklow, at the estuary of the Avoca River, and I'm going to be working with my local school for the BT Young Scientist exhibition as part of this project as well.

When I was in secondary school, I had a really fantastic geography teacher, and I really enjoyed the subject - I always liked biology as well. I decided to do the science degree in Dublin because I could commute from home and also because I could try out different science subjects. I thought originally that I would want to study genetics, and I took a lot of courses in biology, but then went on the first-year geology field trip to Co. Antrim. I don't know what it was about that trip, but I was captivated by geoscience straightaway. And I never went back to genetics! After first year, I knew I wanted to study geology or environmental biology. I discussed it with some people, and realized that if I did a geoscience degree, I could always go back into environmental biology at a later stage, which is what I’ve done. I think looking at how things have changed in the past to try and understand current processes was always something that I was interested in, and I'm glad I went down that route.

What was it about the Antrim field trip that you particularly enjoyed?

I think it's different to any other kind of learning that you experience at university, because you're taken out into the field, and you're asked to think for yourself. In a lot of other programs I wasn't getting that kind of stimulation. For example, we were asked to describe what was in front of us and, even though we didn't know anything at the start, we were able to say things like ‘it's a black rock’. Then a lecturer would ask, ‘well, what do you think that means?’, and someone would say ‘it could be volcanic’. I think it encouraged a kind of community discussion and learning that I didn't get in other courses. It was a really eye-opening experience.

What was it like to study geology in the School of Earth Sciences?

One of the benefits of the geology degree is that it normally has a small student cohort. In my class, we got to know each other and the staff very well. The small class size encouraged everybody to be quite active in their learning. It was great to welcome visiting international students as well: they instantly became part of the department, and it allowed us to create international links.

What advice would you give to someone considering taking a module in geology?

Try it in first year, including the fieldtrip, and let go of any perceptions that you might have about what it means to be a geologist because it's so much more diverse than people realize. There are so many opportunities intertwined with other subject areas that will stem from a degree in geology. Geology is such a broad field. I think sometimes students are afraid that, during a degree in geology, all you're going to be doing is identifying rock types, but that's not what the degree is about at all - it's so much broader and there are so many areas you can specialize in. My classmates have all specialized in very different areas. There are so many branches of the subject and anybody can find something that suits them within it, whether you are more of a qualitative or a quantitative person…And definitely join Rock Soc!

I commuted from home in Arklow (Co. Wicklow) for two years and lived on campus for two years. When I was commuting, I had a group of friends who all commuted as well, so not living in Dublin doesn't mean you won't be able to make friends. And after that I loved living in Dublin! It’s a great city to be a young person in.

What do you hope to do after your masters?

I'm hoping that, after I graduate, I can work in environmental engineering or ecological surveying, or do a PhD in an area related to that. It’s not exactly geoscience but I always end up coming back to geology skills like coring and thinking about processes in more than one dimension. I think that's what the geology degree really provided me, because a lot of the skills were super transferrable.