Dr Nick Scroxton, postdoctoral researcher in UCD’s School of Earth Sciences and Marie-Skłodowska Curie and Irish Research Council CAROLINE Fellow, talks to us about his research and career so far. 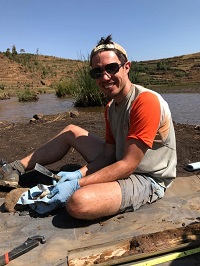 What is your current research about?

Currently I'm investigating 20th-century rainfall variability in southern Africa, including in Malawi, Madagascar and Zambia. I’m looking at what the rainfall trends and cycles are, whether we can see the influence of climate change on rainfall in the region and which direction is it heading in. Given that climate models are not always good at predicting the direction of sub-tropical rainfall, it's important to have data from different sources. I'm using a combination of satellite data and weather station data to look at rainfall variability in the last few decades. I’m also studying the chemistry of stalagmites from Madagascar (this is called stalagmite geochemistry) and using it to look at climate variability further back in time from before we had satellites and rain-gauges.

How can you get information on past climates from stalagmites?

Stalagmites grow in layers from the ground upwards, and the chemical composition of each layer records information about the climate above the cave when that layer was deposited. For instance, we can look at stable oxygen isotopes, or we can use the ratio of magnesium to calcium in the stalagmite, comparing different layers to get information on past climates, including rainfall.

I really enjoy my work because it’s so varied, from lab work, to fieldwork, to computer work. The majority of my time is actually spent coding in Python, processing data and trying to figure out what it all means when combined together. I spend far too much time making pretty figures, which I really enjoy, but fieldwork is definitely the highlight of my activities - I've been to Madagascar four times over the last six years. I go there for two or three weeks at a time and go caving, which is great fun. After that, I might spend several weeks in the lab, dating the stalagmites using uranium thorium geochemistry. This involves processing the samples in a clean lab, and isolating the uranium and thorium fractions into columns. Then I use a mass spectrometer to measure the how much uranium there is compared to the amount of thorium, which tells us how old the stalagmites are. I also drill small amounts of powder from each layer of the stalagmites to measure the chemical composition that provides our rainfall proxy. There’s a fair amount of lab work, concentrated into periods of a few weeks.

What is it like to do fieldwork in Madagascar?

The whole experience is wonderful. It's such a beautiful country. It's stunning. Logistically, it is difficult to move around in and it takes days to get anywhere. For our fieldwork, we get to go to beautiful locations and go caving. We've also seen lots of wildlife: lemurs, wild tortoises, pythons and birds. 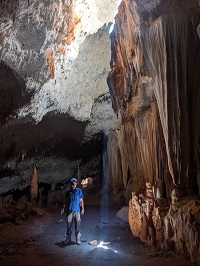 How did you come to a career in geology research?

Completely by accident! At the end of the third year of my geology degree in the UK, I thought I would end up getting a job and doing something outside geology. Then in fourth year, everyone got to choose a research project. I didn’t get any of my top three choices of research projects, and instead got to pick from what was left. I chose a project on paleoclimate working with foraminifera and I loved it. I just loved doing research and doing paleoclimatology, and suddenly I realised this is what I wanted to do! It was not planned, but that led me to a PhD and further research.

Do you have any advice for students interested in studying geology?

I’d really recommend doing research into the variety that's on offer in terms of the earth sciences. I think people have this idea of what geology is, which attracts some people but there's so much more to it. Often, people think it’s about oil and gas and rocks, but actually, it’s also about earthquakes, volcanoes, the history of life on Earth, dinosaurs and planetary geology. The people studying Mars are earth scientists! I think people often don't quite realize the variety on offer when you study earth sciences or geology.

What do you like to do outside of work?

It varies. I'm a bit of a jack of all trades when it comes to hobbies. I love travelling, hiking, running, baking - variety seems to be a common theme!