10th November @ 6pm ONLINE
Revolutionary Women in a Revolutionary Country. Gender and Class during the Portuguese Estado Novo and the Carnation Revolution
A talk with Giulia Strippoli (Nova University of Lisbon)

'Turning Back to the Mystics: W. B. Yeats and Juan Ramón Jiménez’s Religious Modernism' - Dr Nuria de Cos Lara

ABSTRACT: In his lectures in the Universidad de Puerto Rico, Juan Ramón Jiménez contended that literary modernism was born out of theological modernism, a Catholic, European movement that sought to revise traditional Catholic teachings in the light of modern-day cultural advancements. While the efforts of theological modernism were short lived within the Catholic Church, they had an impact that can be perceived in the works of Juan Ramón Jiménez, amongst other writers of the period. While there have not been many attempts to outline a clear field of Modernism and Christianity studies, this has started to change in recent years. This paper examines the poetry of W. B. Yeats and Juan Ramón Jiménez to find that they turn back to the Spanish Mystic tradition to creatively support their unorthodox religious position within Modernism. It claims that the Neo-Mysticism of both writers is one of intense individualization to achieve contact with divinity.

ABSTRACT: While Catholic schoolgirls have long been fans of photographer Piero Pazzi’s annual Calendario Romano (better known as the Hot Priest Calendar), the rest of the world has now also been awakened to the cinematic potential of hunks in habits through Andrew Scott’s portrayal of The Hot Priest in Fleabag Season 2. The character has renewed reflections around the cultural potency of the celibate male religious figure, raising questions that also need to be answered in the context of contemporary Spanish hagiographies where the rugged masculinity of clergy is often asserted as the linchpin of their Christian values. This paper will discuss the fetishization of athleticism and virility as moral virtues in and the RTVE hagiographies Tarancón, el Quinto Mandamiento (2011), Descalzo sobre la tierra roja (2013), and Vicente Ferrer (2013).

'Elevating the honour of the screen from its degraded depths’: The distribution and exhibition of European religious films in 1950s Ireland' - Dr Sarah Culhane 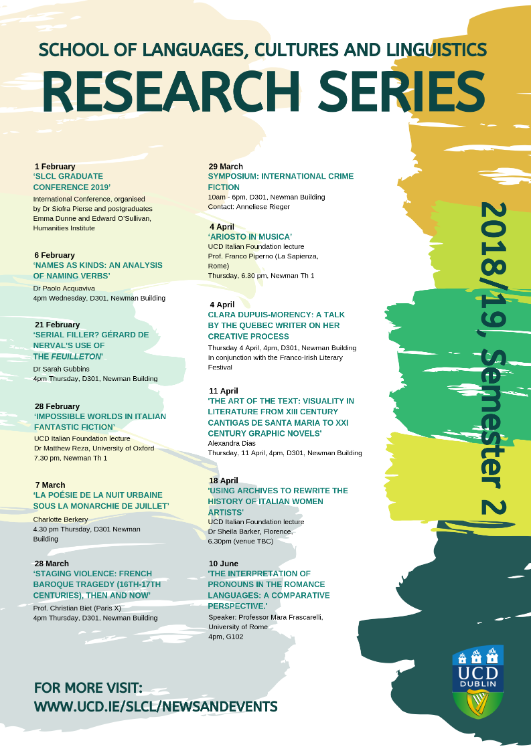 School of Languages, Cultures and Linguistics