A two-horse race? The Twittersphere’s reaction to the first leaders’ debate of GE2020

A two-horse race? The Twittersphere’s reaction to the first leaders’ debate of GE2020 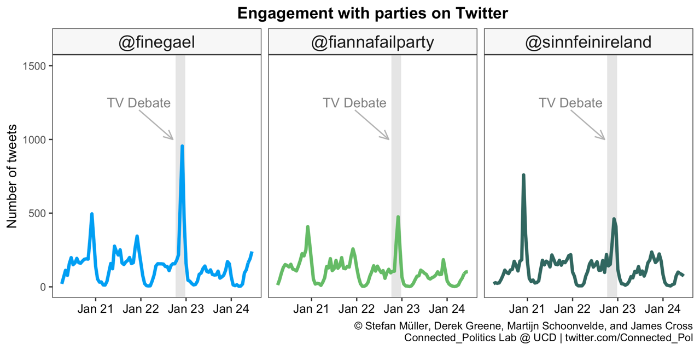 The second leaders debate of the election campaign takes place tonight on RTÉ. In contrast to the first debate, it includes all seven major party leaders. The in-studio dynamics are likely to be quite different as a result, but it remains an open question whether or not being included matters in terms of the campaign. In this first Connected_Politics Lab campaign commentary, we explore this question by looking at online engagement with the Twitter accounts of Fine Gael, Fíanna Fail, and Sinn Féin before, during, and after last Wednesday’s debate.

The first leader’s debate of #GE2020 was hardly a memorable affair. Even if An Taoiseach Leo Varadkar’s admission of drug use in his earlier years will remind some of the past controversy surrounding this issue, most of the debate-related drama happened in the run-up to the event.

On 21 January it became clear that two of the three debates scheduled before polling day will be head-to-head affairs between Leo Varadkar and Micheál Martin alone. Sinn Féin in particular were not amused at this news, especially considering recent polls showing a steady increase in support for the party in the last couple of weeks.

Sinn Féin Deputy, Pearse Doherty, wrote to Virgin Media to complain about the situation ahead of the first debate, and the party later went as far as sending a legal letter to RTÉ calling for the decision to exclude Mary Lou McDonald from the leaders debate to be overturned. They called RTÉ’s decision an “action which [is] demonstrably likely to unfairly influence voters in a manner which runs counter to the democratic principles which underpin our Constitution”. Strong words indeed.

On the face of it, Sinn Féin’s complaints are not unreasonable. They fear that their exclusion from the debates increase the danger of a two-horse race emerging between Fine Gael and Fíanna Fail. The supposed danger is that the public’s attention will focus solely on those in the studio, at the expense of those not invited, and this will translate into votes on election day.

We at the Connected_Politics Lab decided to explore how well-founded these fears are in the context of the online campaign. We tracked social media engagement with the Twitter accounts of the three main parties and their leaders in the period before, during, and after the first debate (20–24 January) and found little evidence supporting Sinn Fein’s worries. At least in the Twittersphere, the Virgin Media debate did not shift engagement towards the leaders of Fine Gael and Fíanna Fail and away from Sinn Féin.

The two figures presented here show the number of tweets per hour mentioning the accounts of the parties and party leaders respectively. The grey-shaded area indicates the period surrounding the TV debate (Wednesday, 6pm until midnight).

Starting with the first figure, in the four days of campaigning we examined, 10,697 (Fianna Fáil), 12,584 (Sinn Féin) and 14,485 (Fine Gael) tweets tagged the official parties’ accounts. The Government appears to get more attention online, but this is not surprising given that they are the incumbents. Engagement with the Sinn Féin account was actually higher than engagement with Fianna Fáil’ official account over the full four days. This can be explained by Sinn Féin’s vocal objections on 20 January to not being included in the main debates by Virgin Media and RTÉ at that time. 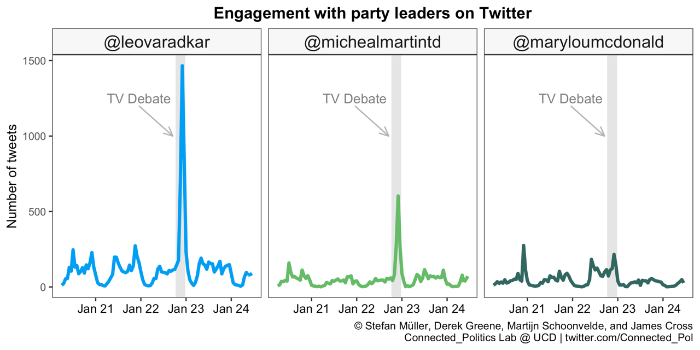 Turning to the second Figure, the differences in engagement with the party leaders’ accounts are much stronger: the Twittersphere engaged with Leo Varadkar (12,846 mentions) more than twice as much as with Micheál Martin (5,372) and Mary Lou McDonald (4,800 mentions). Being Taoiseach brings with it a lot of public profile, and this is reflected in our data.

When we consider the trends in engagement over time in both figures, we see that the debate clearly increased online engagement with the three parties’ accounts when it was ongoing, but no lasting effect is evident - once the debate ended, attention-levels returned to normal. For the leaders, we can see a dramatic increase of Twitter engagement with Leo Varadkar and Micheál Martin’s Twitter accounts. The bright lights of the television studio seem to have prompted the Irish Twittersphere to respond. The number of mentions for Mary Lou McDonald also increases slightly during the debate, but the rise is much more modest. Yet, the debate does not seem to have had a lasting effect on Twitter engagement with the party leaders in question. Engagement with all three candidates quickly returned to the previous levels observed once the excitement of the debate receded.

Before the debate, we can also clearly see the daily ebb-and-flow of attention for the three official party accounts and the accounts of An Taoiseach over each 24 hours period. Not surprisingly, these accounts get more attention during waking hours, while attention drops off during the night. Interestingly, this pattern is not as clear for Micheál Martin and Mary Lou McDonald – they struggle to get as much direct engagement as Leo Varadkar during daylight hours. We should clarify however that this is not necessarily a bad thing – not all attention is good attention and much of the engagement we see with all accounts is less than positive in nature. This is a well-recognised feature of the online campaign.

On the basis of the evidence presented, it seems safe to conclude that the two-leader-only format of the first debate has not turned the campaign into a two-party race – at least when it comes to campaign engagement online. We will update our analysis following tonight’s debate to see if this holds for the more inclusive format. Our takeaway message for now – maybe these debates do not matter so much after all.