The Twittersphere’s reaction to the second leaders’ debate of GE2020

The Twittersphere’s reaction to the second leaders’ debate of GE2020

Sinn Feín’s Mary Lou McDonald and People Before Profit leader Richard Boyd Barrett are widely considered to have won Monday’s Claire Byrne debate on the campus of NUI Galway. In a tweet, Harry McGee (@harrymcgee), political editor of the Irish Times, put the performance of both McDonald and Boyd Barrett ahead of the rest.

Thanks to those who Live Blog on @irishtimes. My own view of the order of merit was 1. @MaryLouMcDonald 2. @RBoydBarrett 3. @LeoVaradkar 4. Joint @BrendanHowlin and @MichealMartinTD 5. Joint @EamonRyan and @RoisinShortall. Sometimes the old lines are the best ones! #togh2020

What did the Irish Twittersphere have to say about this? We at the Connected_Politics Lab tracked social media engagement with the Twitter accounts of the party leaders taking part in Monday night’s debate in the period before, during, and after the TV screening (25–29 January). While we find clear differences in engagement with the candidates during the debate, these differences quickly tapered off at the end of the debate, much like last week’s #VMTVBigDebate between Leo Varadkar and Micheál Martin.

The first Figure shows engagement with the seven party leaders on Twitter during the debate (9:30pm until midnight). With around 2,000 direct mentions, An Taoiseach Leo Varadkar received most attention. He is followed by People Before Profit’s Richard Boyd Barrett and Mary Lou McDonald. The high engagement with Boyd Barrett mirrors several experts’ evaluations who agreed that the PBP politician did a good job in criticising the established parties with a series of debate ‘zingers’. The same goes for McDonald, who was widely seen to come out of the debate with an enhanced reputation.

Compared to Varadkar, the Twittersphere paid only half as much attention to Fianna Fáil leader Micheál Martin, who in turn just edged out the Green Party leader, Eamon Ryan. Twitter engagement with the leaders of the Labour Party and the Social Democrats was lowest, suggesting they failed to ignite the imagination. 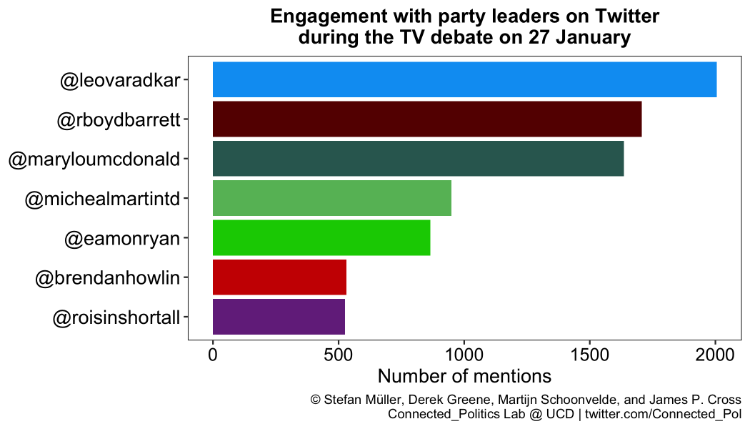 We next sought to understand whether McDonald and Boyd Barrett have seen any lasting online engagement benefits from their debating successes on the night. Our second Figure suggests not. Even though engagement with Boyd Barrett increased in the morning after the debate, engagement quickly returned to previous levels. Mentions of Mary Lou McDonald seem to have increased slightly, but it remains to be seen whether these gains will last. The next multi-leaders debate on 30 January will provide us with an opportunity to find out. 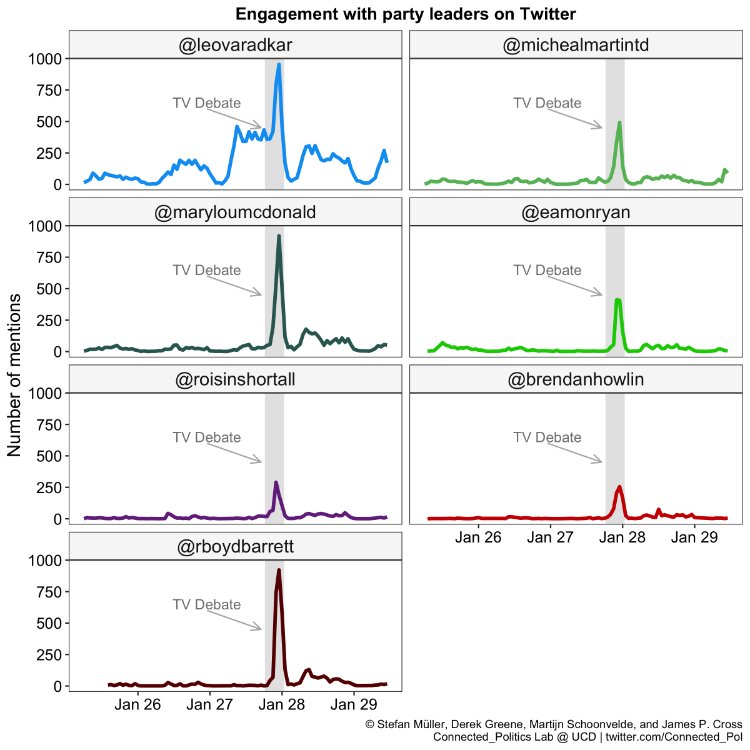