What do political parties talk about when it comes to climate change?

What do political parties talk about when it comes to climate change?

Most people care about the environment, but do the parties they vote for? Using a dataset of party manifestos from the Manifesto Project covering 24 European countries and a period of almost 40 years, we uncover the promises that parties make, and the issues they focus on in the context of the climate crisis. We find that ecological protection and infrastructure are the most common themes discussed by parties. Furthermore, we find that, in the face of climate change, traditional expectations of competitive party politics appear to break down. Government and opposition parties are equally likely to make climate-related promises, and green party representation in government does not appear to increase the likelihood of climate-related promises among other parties.

In this project, we used a machine-translated subset of the Manifesto Project corpus for EU member states, which was kindly provided by Stefan Müller. This corpus provides topic annotations at the level of quasi-sentences, including a category for environmental protection. Our analysis focuses solely on this category. We trained a machine learning classifier to identify promises in the corpus. We also developed a framework of recurring themes in the discussion of environmental protection. Our framework classifier uses BERT – a large pre-trained language model based on a transformer architecture – to aggregate climate discussion into 8 recurring themes. We fine-tuned the model using 3,000 manually labelled sentences, and applied this to the 43,000 climate-related sentences in the dataset.

Effect of party ideology and country

We observe significant variation in the rate at which various party families and countries make prospective statements around climate. Prospective statements are here defined as future-orientated sentences, which have been shown to be a good indirect measure of promises. As such, we refer to them throughout as promises, even if the fulfilment of these future-related statements cannot be tested directly. Special issue, ecological, and agrarian parties, on average, make the most climate-related promises, whereas nationalist and conservative parties make the least. 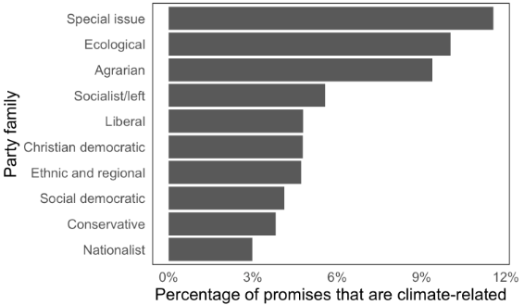 Parties in Italy and the Scandinavian countries of Sweden, Denmark and Norway make the largest proportion of climate-related promises. However, country-level differences should be considered with caution due to the significant variation in data availability between countries, and the view of some EU member states that climate change should be dealt with at the supranational level.

We also investigated whether green parties influence the number of climate-related promises which appear in other party manifestos. We expected that when green parties were represented in government going into an election, other parties would increase their promises. This follows the logic that when ecological ambition was a vote-winning issue in the previous election, other parties will follow suit. However, according to the regression analysis we conducted, there is no substantial difference when a green party is currently represented. This is not to say that green parties do not tangibly influence climate discussion in other ways. Further research is needed to examine whether the initial emergence of green parties has any impact, even before they hold any formal power, as well as to examine the mechanisms by which grassroots organisations and pressure from the electorate exert influence on the political salience of climate change.

The financial crisis and the infrastructure solution 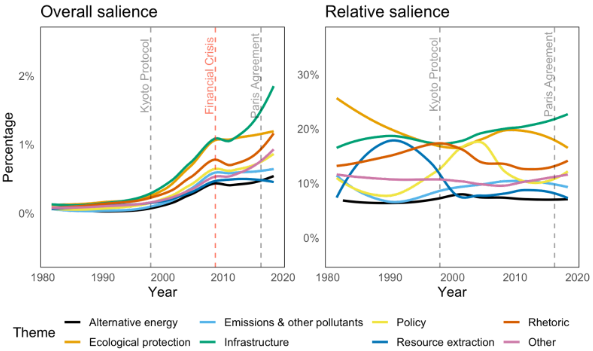 On one hand, this finding is promising as the infrastructure theme captures many actionable solutions to significant sources of emissions, such as transport and energy use in buildings. However, it is concerning that discussion of alternative energy and emissions more broadly has essentially flatlined since the 2008 financial crisis.

Implications – How might the COVID-19 pandemic affect climate themes?

The 2008 financial crisis had a dramatic impact on growth and salience of climate discussion among political actors in democratic countries. The COVID-19 pandemic may have had a similar impact, triggering a stock market crash and mass unemployment in 2020 and contributing to the looming threat of stagflation in 2022. Given the urgent need for ambitious climate action, another setback of several years could have devastating consequences, especially when compounded with other ongoing crises.

With this analysis, we can begin to build a better picture of how political parties and climate change interact. Using state-of-the-art transfer learning models, we have shed light on what themes parties tend to focus on in regard to climate change. We have also investigated the role of government status, and specifically the incumbency of green parties, on climate-related promises. Future research could further investigate how recent political treaties and events such as the 2016 Paris Agreement or COP26 influence climate-related promises in parties’ communication. As natural disasters become more frequent, salient, and undeniably attributable to anthropogenic climate change, we hope the framework proves a useful measure to gauge how parties adjust their priorities.

About the authors: Alice Branagan, Paula Mahler and Lorcan McLaren are graduate students at University College Dublin reading Politics and Data Science. The paper related to the presented research was produced as part of the module "Connected_Politics", affiliated with the Connected_Politics Lab.