We only agree to disagree

Forming a government after the 2020 election

The preferred coalitions of the parties lack a majority of seats, and those alliances that “have the numbers” appear difficult to impossible to achieve. There are a number of reasons why the numerically feasible options may be unpopular with the key actors: long-term rivalry between the parties (FF-FG), strategic considerations (FF-FG), personal animosities (FF-SF?), and, most obviously, policy differences (FG-SF).

In this post, I aim to give a data-driven overview on some of the issues that potential coalitions agree or disagree on. For this purpose, I rely on parties’ answers to the Vote Advice Application WhichCandidate.ie that was created and run by Dr. Rory Costello at the University of Limerick. The website allowed voters to find candidates that closely matched their own views on 27 policy questions. I use the parties’ answers to quantify the scope for policy agreement across various party alliances[1]. Note that this exercise is not meant to replace more detailed comparisons of parties’ policies as, e.g., outlined in manifestos. It simply allows us to explore areas where parties agree and disagree on policy.

The analysis begins by looking at the potential for conflict between pairs of parties. I include FF, SF, FG, Green Party, Labour, Social Democrats, People Before Profit, and Solidarity in the comparison. Figure 1 distinguishes between hard clashes and soft clashes. I rated a clash as soft if the question asked about agreement to a statement and one of the parties answered that it would “neither agree nor disagree”, while the other “agrees” or “disagrees”. In such cases, there probably remains more potential for finding a common ground than when answers are polar opposites (one party “agrees” and the other “disagrees” with the statement, or their responses to those questions with other answer categories vary). The plot orders party pairs based on the level of conflict between them.

Three points are worth highlighting:

First, we can see that the combination of FF and FG is among the most harmonious of the pairs, with only nine conflicts (from among 27 questions) between them. While this will not be big news to most readers of this blog, the data supports the idea that the reasons why FF and FG hesitate to form a government together are largely not policy-based.

Second, and this may be surprising, SF and FG actually disagree on only eleven issues. However, eight of these are hard clashes, which might explain why they have ruled out a coalition (more on this below).

Third, with an FF-FG-Green-coalition as a potential government option, it is also interesting to see that the Greens disagree on many issues with both of these parties. With ten hard clashes the FG-Greens combination matches the number yielded by an alliance between FF and SF, and only conflicting policy preferences between far-left parties and FF /FG reach higher numbers. 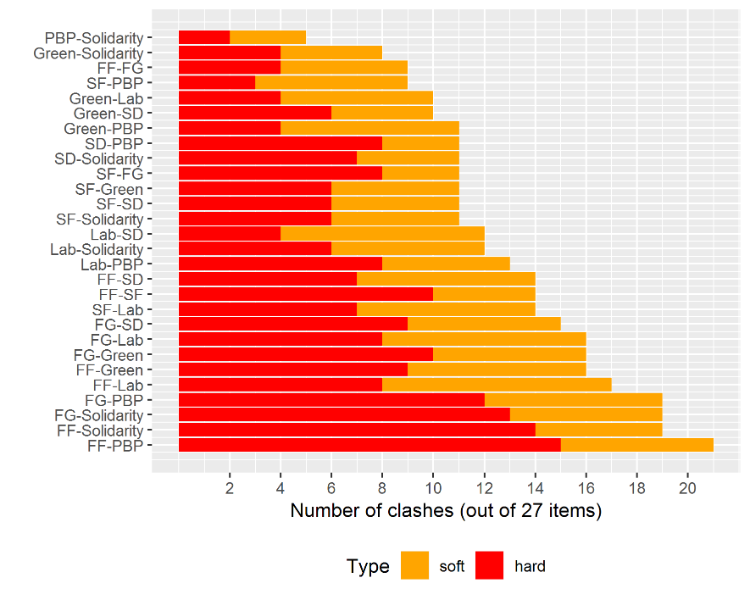 We rate clashes as “soft” if one party gives a neutral answer on an agree/disagree question, while the other does not. Solidarity did not answer the questions on “Investment in transport” and “Ban petrol/diesel vehicles”; values were taken from the PBP answers.

Figure 2 gives a more detailed overview of consent and conflict across the 27 policy issues captured by the WhichCandidate.ieproject. These are loosely grouped by policy area for added clarity (taxes vs. spending, housing, health, environment, Northern Ireland, immigration, moral issues, Europe, and others). The graph covers two-party combinations between the three largest parties in the current Dáil (FF, SF and FG) and also includes a broad left coalition (consisting of SF, Green Party, Labour, Social Democrats, PBP and Solidarity) and a FF-FG-Greens coalition. The final column indicates which answer category (if any) has a party-backed majority in the Dáil. 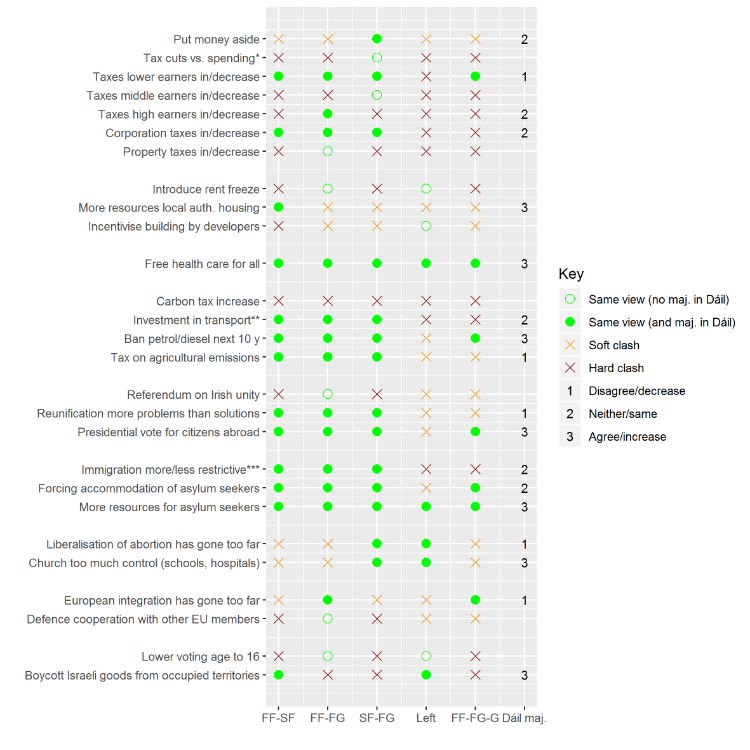 First, the issues on which SF and FG agree include economic questions – for example, both SF and FG neither agree nor disagree on putting money aside, both favour some tax cuts and some spending increases, and both want to decrease taxes for middle-income earners. There also exists some common ground between SF and FG on moral/social questions - both state that liberalization of abortion has not gone too far, and that the Church has too much influence on schools and hospitals.

Second, there has been much talk about a broad left coalition (including SF, Green Party, Labour, Social Democrats, PBP and Solidarity) not being close to a majority. That is clear, but even if they had one, another question is whether they would be programmatically cohesive enough to form a government. Such a coalition demonstrates nine hard and ten soft clashes between the players involved. It is also striking that they do not agree on a single one of the socio-economic issues grouped at the top of the figure.

Third, FF, FG and the Greens may command a majority of seats, but the data also suggest that they have many hard (eleven, many related to economic and environmental matters) and soft (nine) disagreements. The key question is whether they will be able to find policy compromises that would overcome these disagreements. Compromise might be facilitated by the fact that parties probably attach varying levels of importance to each policy area, but the high levels of conflict suggest that such a government agreement is likely to take some time to negotiate.

Fourth, if a government of FF, FG and Greens indeed materializes, this will have another interesting consequence. It is possible that it will not be able to find a compromise on some issues where the parties in the Dáil might form a majority on the floor. This can be seen as problematic from a normative perspective particularly when the floor majority is unhappy with the status quo. There are four such points of conflict evident in the data used here. FF, FG and Greens are in disagreement while a Dáil majority (a) is in favour of more resources for local authority housing, (b) is not thinking that Irish reunification would create more problems than it solves, (c) is suggesting that the Church has too much influence on schools and hospitals, and (d) is supporting a boycott of Israeli products from occupied territories.

What most people do agree on is that much work remains to resolve these disagreements over the coming weeks, and if the parties in question are unsuccessful, then we are likely to see another election in the near future.

[1]It is unfortunately not possible to consider the role of independent TDs in the analysis here due to data availability.

I would like to thank Rory Costello for kindly sharing the data from WhichCandidate.ieand both Rory Costello and James Cross for commenting on a first draft of this post. Any errors are mine.