Does the programme for government in Ireland reflect the change that voters demand?

Does the programme for government in Ireland reflect the change that voters demand?

While party manifestos have been analysed extensively, only a few studies compare issue and policy salience in coalition agreements, and programmes for government (for a recent exception see Klüver and Bäck 2019). This is surprising, given that these documents often determine which policies will be enacted in government, and what issues the government will give priority to. They are also very important documents for internal debates within parties, and typically shape the decision on whether party members support entering government.

Programmes for government are particularly important in multi-party systems, where coalitions across partisan divides are the norm. In 2011, Belgian political parties spent a record 541 days negotiating a programme for government. Last week, after 128 days of negotiations, Ireland’s two centre-right parties, Fianna Fail and Fine Gael, and the Green party, agreed a programme for government. This is currently being debated within these parties, with each party having a different system to secure agreement from their members.

Central to their internal party debates is the proposed five year programme for government itself. The most vocal opposition is coming from party activists within the Green party. This is despite most observers and commentators noting that the programme for government contains detailed references to core Green-oriented policy commitments, such as carbon reduction. Those within the Greens who oppose the agreement argue that the programme does not tackle the crisis in housing, and does do enough on questions of economic justice.

Analysing the PfG’s as textual data

To answer this question, we apply a quantitative text analysis to assess the development of specific policy issues across all Irish Programmes for Government (PfG) published since 1997, using the open-source quanteda R package. Figure 1 below shows quite clearly that PfG’s have become much longer over the years. For instance, the PfG between Fianna Fáil and the Progressive Democrats in 1997 consisted of only 7,308 words, while the most recent PfG between Fianna Fáil, Fine Gael, and the Greens amounts to almost 50,000 words. This suggests that the more parties involved in negotiations, the lengthier the document itself. 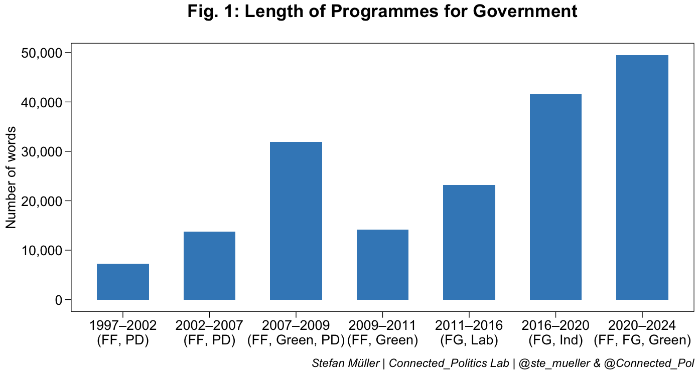 Due to the varying lengths of the documents, we report the textual analysis in two ways. First, we plot the absolute number of words from each policy area. Second, we divide the number of policy-related words by the total number of words and plot relative word frequencies (see the plot at the end of the post). The substantive conclusions are very similar. Both in relative and absolute terms, policy issues such as climate, transport, housing and healthcare have become more salient over time. Whilst we have not reported it here, the ‘economy’ is important in almost every PfG. This has not changed much over time.

Having constructed the corpus, we apply a dictionary with relevant keywords about these quality of life issues to each document.* For example, the category Housing includes terms such as housing, home, mortgage, and rent, while Climate includes terms like environment, climate change, sustainability, and greenhouse gas. At the end of the blog post, we list the most frequent dictionary terms used in each of these categories. While the number of terms selected for each category varies, we can still compare the relative salience of these policy terms across the documents.

Figure 2 below shows the total count and sum of words for each of our six dictionary categories (childcare, climate, housing, healthcare, housing, investment and public transport) in all documents since 1997. Several results are noteworthy. The focus on climate change and public transport (which we’ve included with cycling) has doubled in absolute terms between 2020 and the previous PfG in 2016. Whereas the 2016 document contained 92 mentions of climate-related terms, the 2020 PfG includes 235. The 2020 PfG contains devotes by far the highest relative and absolute emphasis on climate-related terms since 1997, followed by the Programme for Government from 2007, which also included the Green Party. Given the 2008–2010 crisis, this PfG was never implemented.

Public transport also features more strongly in the 2020 PfG. It has increased from 24 words in 2016 to 58 terms in 2020. Central to this are issues around cycling infrastructure. The absolute number of words on healthcare and childcare has increased too. Childcare hardly featured at all during the 1990’s and early 2000’s. It was mentioned 11 times in 2002, whereas in 2020 it was mentioned 53 times. Similarly, healthcare has increased from 34 mentions in 1997, to 289 in 2020. These issues have become more salient in absolute terms.

However, the focus on housing and investment has actually decreased in absolute and relative numbers between 2016 and 2020. Housing was mentioned 251 times in 2016, and 219 times in 2020. Investment was mentioned 126 times in 2016, and 88 times in 2020. Whilst we are reluctant to conclude that this means they have become less salient as policy issues (they clearly haven't) for the proposed programme for government, it gives some substance to the Green party argument that housing affordability did not feature enough. 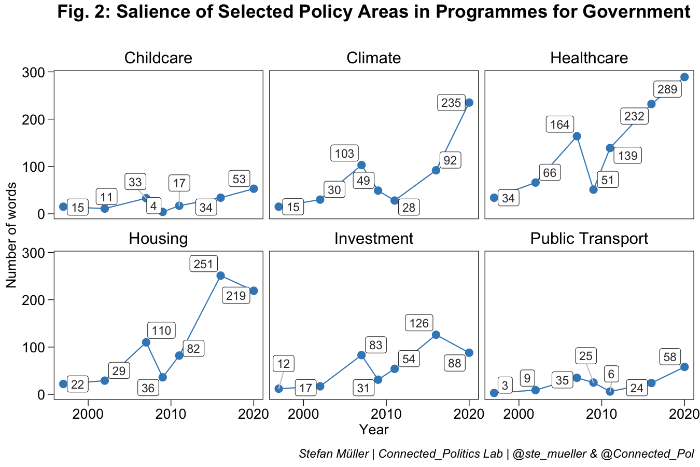 Finally, in Figure 3, we conduct a so-called keyness analysis to identify what words are most “unique” in the 2020 PfG, when compared to all other PfG’s between 1997 and 2016. A higher value implies that a term is much more prominent in the 2020 PfG compared to the group of all previous PfGs. Unsurprisingly, covid-19 has by far the highest value, given that the current pandemic is completely unique to previous years. But interestingly, several climate-related terms pop up as well, such as biodiversity, climate, water, and sustainability. We also observe the rising importance of public transport, given that terms like cycling and connectivity appear much more often in 2020, relative to all other previous documents. 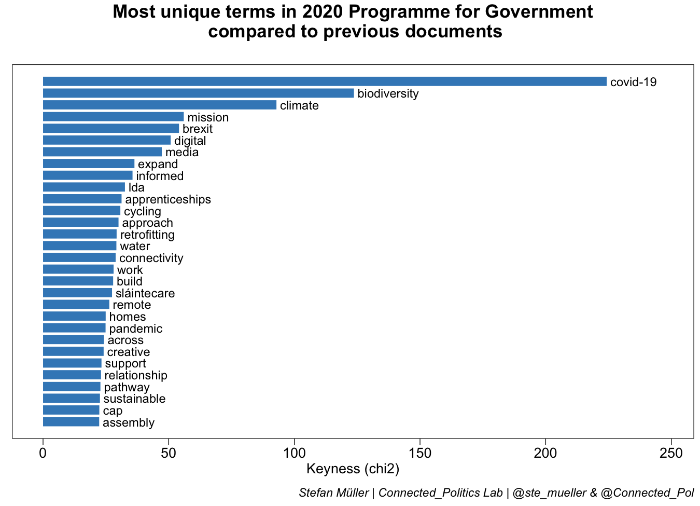 These initial analyses clearly show the importance of the environment, climate change, public transport, and “quality of life” issues in the most recent PfG. Core Green party policy concerns feature very prominently throughout the 2020 proposed PfG. In both relative and absolute terms, climate-related issues feature more prominently when the Green party is involved in negotiating the PfG. More generally, over the past two decades, quality of life issues associated with public investment and public infrastructure (housing, healthcare, and childcare) have become more and more salient issues. Whether the government implements solutions to these problems in government is, of course, a completely different question.

*For the interested: We extended and edited a dictionary developed by the Comparative Agendas Project for the Irish context. For recent discussions of the advantages and shortcomings of dictionaries for identifying concepts of interests or policy areas see Müller (2020); Barberá et al. (2020) and Dun et al. (2020). Please contact Stefan Müller if you have any questions or require code or datasets.

About the Authors: Stefan Müller is Assistant Professor and Ad Astra Fellow at the School of Politics and International Relations, University College Dublin, and also a founding member of the Connected_Politics Lab. Aidan Regan an Associate Professor of Politics and International Relations at University College Dublin, and Director of the Dublin European Institute (DEI), a Jean Monnet Centre of Excellence. 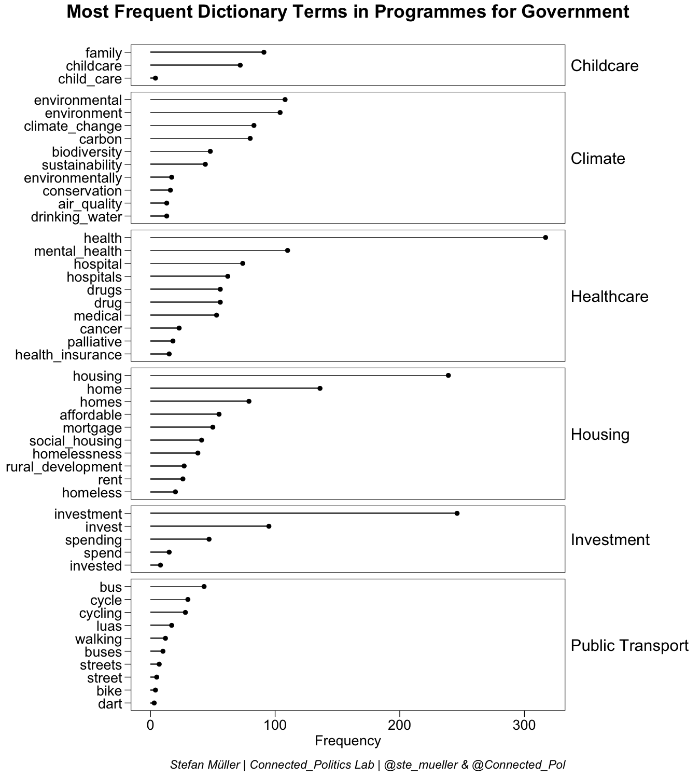 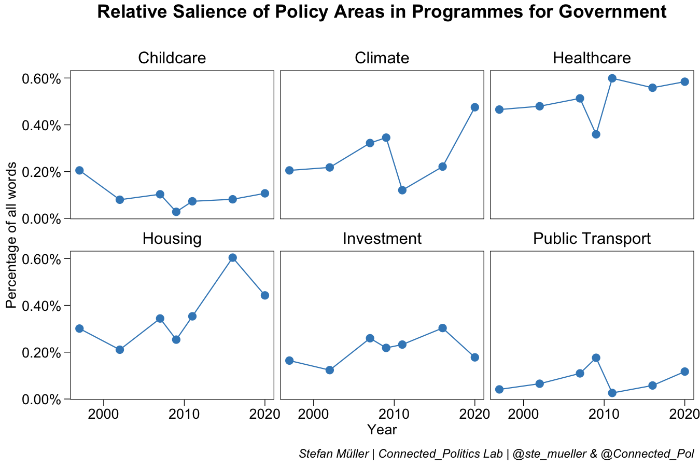