Almost immediately after An Taoiseach Leo Varadkar called the #GE2020 elections on 14 January, campaign posters started to appear on Ireland’s streets. We, as members of the public, knew the campaign was underway, but the issues around which the campaign would revolve were yet to come into clear view. With the manifestos yet to be published, what issues did parties and candidates rally around? And did the official start of the campaign change their issue focus compared to what they were talking about before the campaign started?

To provide some context about what the electorate care about, a recent Irish Times/Ipsos MRBI poll found that the issues that Irish voters seem to care most about currently are health, housing, the economy, and climate change. 40% of respondents reported that healthcare will have the most influence on the choice of parties or candidates, followed by housing (32%), the economy (8%) and climate change (7%).

In this analysis, we explore the issues that parties and party leaders are paying attention to on their Twitter feeds, and explore whether the election call changed their focus. Our dataset contains 19,796 tweets that were posted before the election was called, and 4,205 tweets since the announcement of the election.

We classified all tweets by the seven main parties and their party leaders using a list of keywords about each policy area.*

To provide a baseline against which to compare issue attention during the campaign periods, our first Figure below displays the 10 most frequently occurring terms and expressions associated with six different policy areas appearing in party and party leader tweets published between May 2019 and January 2020. We can clearly see that Brexit, housing, and healthcare dominate the agenda. Somewhat surprisingly, climate change appears to get less attention from official party and leader accounts, suggesting that an issue high on the international agenda at the time (Greta!) was not making as many in-roads with Irish political elites. 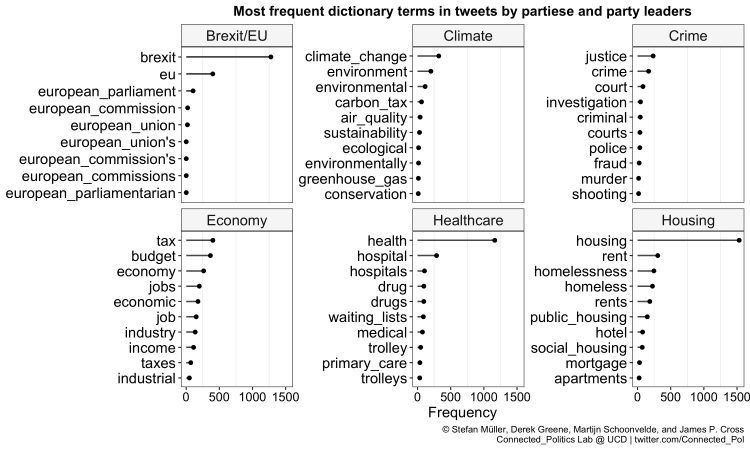 We next examine how the picture changed once the campaign got under way. To do so, our second Figure below compares the prevalence of policy issues found in our baseline period to the first two weeks of the campaign (14th–28th of January).

The x-axes of the second Figure indicates the proportion of tweets in each period containing at least one of the keywords from our six policy areas of interest. For instance, if a term belonging to a policy area was mentioned in 1 out of 10 tweets, our issue salience measure would be 10%. The left-hand side of the Figure considers issue attention across all party accounts, while the right-hand side looks at issue attention across all party leader accounts.

The biggest difference we see is that both the parties and the party leaders have put much more emphasis on housing and healthcare during the campaign compared to beforehand. Party leaders, for instance, put between 2 and 3 times more emphasis on housing and health since 14 January. While emphasis on crime and the climate remained relatively stable and at a rather low level compared to other issues, parties and their leaders have mentioned Brexit and the EU much less frequently during the campaign than they did beforehand. This probably reflects the lull in Brexit negotiations since Boris won the UK election so convincingly and managed to push an agreement through the House of Commons. 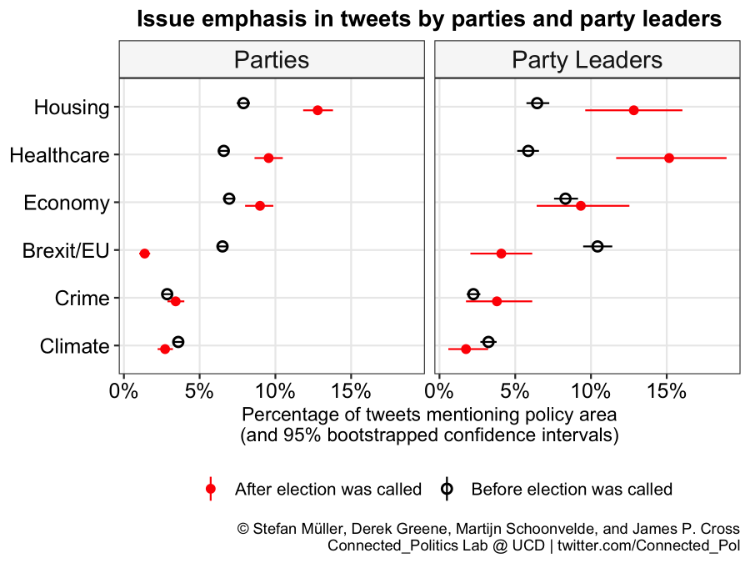 To see if differences in issue emphasis exist across parties our next Figure considers issue emphasis for each individual party and party leader account. Starting with Brexit, only the Fine Gael Twitter account is still trying to put Brexit on the political agenda. Just over 1 in 10 tweets from the Fine Gael account mentions EU- and/or Brexit-related terms. All other parties put much less emphasis on Brexit, with the Greens, Labour, the Social Democrats and People Before Profit basically ignoring the issue since the election was called. The decrease in attention to the EU and Brexit is largest for Sinn Féin (from 13% to 3%) and Fianna Fáil (from 8% to 2%). Perhaps they realise this is an issue where Fine Gael are going to do well in the eyes of the electorate, so they try to change the subject.

As expected, the Green Party pushes climate-related issues much more often than the other parties. The six competitors have actually reduced attention to this issue since the start of the campaign period. A different image emerges for crime, the economy, healthcare, and housing. Fine Gael, Fianna Fáil and Labour have increased their focus on crime in the recent weeks, probably in response to the horrendous recent events in Dundalk and Cork.

The three largest parties and Labour have also increased discussion of the economy, with Fine Gael leading the way on this particular issue. All party accounts have increased their attention to the healthcare issue, reflecting the public’s concern with this issue. Fianna Fáil, Sinn Féin, the Green Party, and Labour have also made a concerted effort to make housing the central issue of the campaign - in contrast to Fine Gael who mention housing in less than 5% of their Tweets. 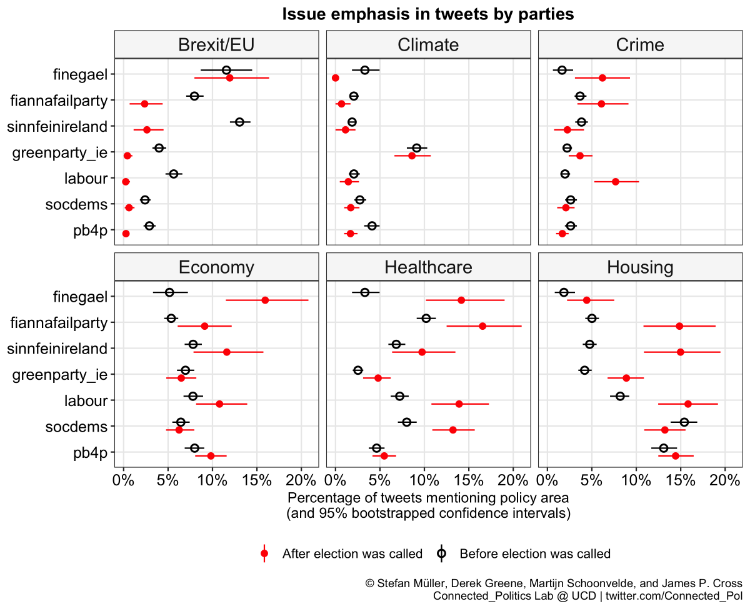 Our final Figure repeats this analysis but this time for the accounts of the party leaders. The findings largely mirror the conclusions drawn from the party accounts, but since the party leaders tweet less, there is much more volatility in issue attention.

This analysis shines a light on how the campaign plays out online. Brexit and the EU have all but dropped off the agenda (at least for now), and the parties are battling it out over crime, the economy, healthcare and housing. Fine Gael’s strategy is to put the spotlight on the economy, while Fianna Fáil and Sinn Feín are hammering home the message that housing is the number one issue facing Ireland. 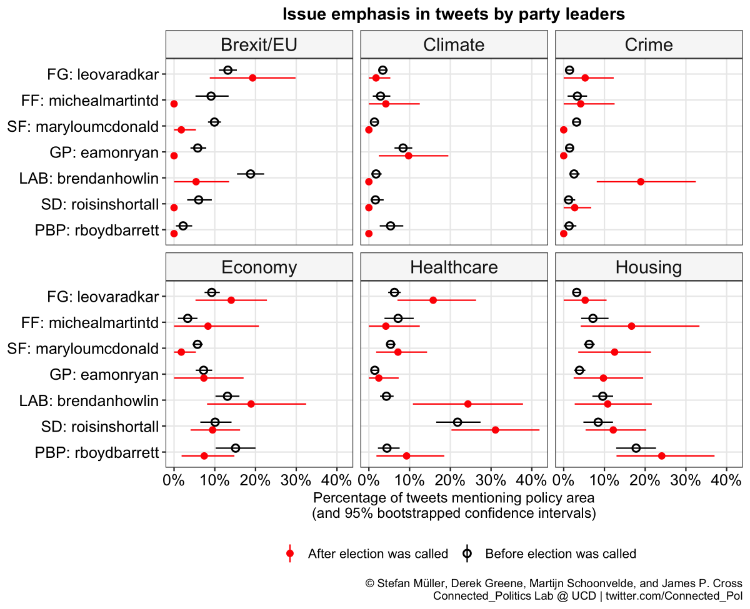 *For the interested: We extended and edited a dictionary developed by the Comparative Agendas Project for the Irish context and retrieved words and phrases about the four most important issues from the opinion poll, as well as Brexit/EU and crime.