Book Launch: The Bicycle Thief and the German Wife. The Hidden War of a German-Speaking Italian Family 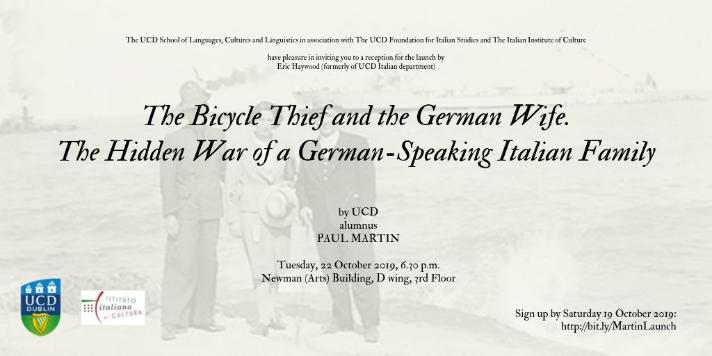 The Bicycle Thief and the German Wife is a fascinating and heart-rending chronicle of an ordinary family caught up in the Second World War. Centred on the secret past of an Alpine soldier from southern Italy and his German-speaking northern wife, it ranges from a Jewish internment camp, the Axis invasion of Russia, the treatment of Italy’s German-speaking population in the South Tyrol, and Mussolini’s long-forgotten prisoners in Germany right up to today’s Italy. Faced with the unrelenting question of “What is the truth of history?”, this intriguing story shows that in Italy – and in its memory of war – things are never just as they seem.

PAUL MARTIN, B.A. (Italian and English) UCD 1991, is the author of Travels with Bertha. Two Years Exploring Australia in a 1978 Ford Stationwagon (Liberties Press, Dublin), described by The Irish Times as one of the “must-read books of 2012″. A senior consultant in the world’s largest fundraising advisory firm, he lives with his Italian wife Barbara and their three children in Greystones, Co. Wicklow. www.paulmartinwriter.com