Congratulations to Dr Des Rice (pictured with UCD President, Professor Andrew Deeks and Professor Michael Doherty, Dean & Head of UCD School of Veterinary Medicine) who is the 2017 UCD Alumni Award Winner for Agriculture & Veterinary Medicine.  The award was presented to Dr Rice for his contribution to veterinary science, the veterinary professional community, animal health and welfare as well as to agriculture and society both in Ireland and in Central America. 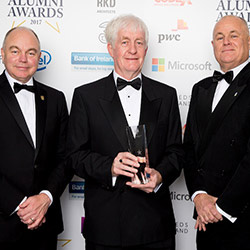 The night of Friday 10 November saw UCD bestow the Alumni Award for Agriculture and Veterinary Medicine on Dr Des Rice, MVB, PhD, OBE, MRCVS. This prestigious award was presented to Des for his contribution to veterinary science, the veterinary professional community, animal health and welfare as well as to agriculture and society both in Ireland and in Central America.  Des is a veterinarian who specialised in livestock nutrition. After 2 years in veterinary practice in Ireland, Des’s global impact began in El Salvador where he spent 4 years developing a Veterinary Investigation Laboratory where he trained local veterinarians during a very troubled period in the history of that country.

He subsequently co-founded two businesses that for 18 years advised farmers, veterinarians, feed manufacturers, and food processors. For services to the Agrifood Industry in Northern Ireland, he received an OBE from the British Government in 2004; the award of the OBE for contribution to agriculture in Northern Ireland is truly a mark of distinction.  Dr Rice then focused on nutritional-disease research in Belfast for 10 years, obtaining a PhD. He has co-authored close to 100 scientific publications.

Dr Rice went on to retrain as a Business Coach and psychotherapist and now provides coaching and mentoring services on strategic, human-behaviour and stress management issues to many businesses and to various community groups including veterinary-peer-supporters, on a voluntary basis.  In his role as business coach and mentor, Des is actively engaged with mental well-being and suicide prevention in the veterinary profession and in society more generally.

Previous Recipients of the Award

The inaugural UCD Alumni Award for Veterinary Medicine was presented to Professor Noel Fitzpatrick in 2014 in recognition of his revolutionary work in the treatment of small animals including his cutting-edge surgery techniques: http://alumni.ucd.ie/awards/awardee/noel-fitzpatrick/

Dermot Weld received the award in 2015 for his accomplishments as one of Ireland’s most successful racehorse trainers: http://alumni.ucd.ie/awards/awardee/dermot-weld/

In 2016, the award was combined with Agriculture for the first time, becoming the UCD Alumni Award for Agriculture and Veterinary Medicine, and that year it was presented to John Horgan, Managing Director of the Kepak Group: http://alumni.ucd.ie/awards/awardees/2016-awardees/

About The UCD Alumni Awards

The UCD Alumni Awards proudly celebrate and honour the outstanding achievements of our alumni who uphold values that UCD holds dear – integrity, excellence, collegiality, engagement, creativity and diversity – values that we believe are in the DNA of our University. Representing the diversity of UCD, awards are presented in the following categories: Agriculture and Veterinary Medicine; Arts; Business; Engineering and Architecture; Health Sciences; Law; Science; Social Science; Sport and Research, Innovation and Impact. The Class of 2017 Alumni Awards were presented on November 10 2017, at a black-tie ceremony in O’Reilly Hall, in front of an audience of over 400 distinguished graduates, friends and staff of UCD.​  For more on the UCD Alumni Awards please see http://alumni.ucd.ie/awards/