Congratulations to Nagwa Elghryani, Conor Rowan and Áine Collins who have recently completed their doctoral studies in the UCD School of Veterinary Medicine.

Nagwa, originally from Libya, successfully defended her thesis last October.  The title of her thesis is ‘The Prevalence and Anthelmintic Sensitivity of Gastrointestinal Nematodes of Horses in Ireland.’

Conor, who is currently a Clinical Fellow in the UCD Veterinary Hospital, completed his Doctorate of Veterinary Medicine Specialisation (DVMS) studies, with his thesis entitled ‘Radiography of the Equine Foot: Reevaluating Accepted Concepts.’

Conor was also concurrently completing his Residency in the European College of Veterinary Diagnostic Imaging, and has just passed his exams, making him a full Diplomate of the ECVDI.

For more on these research projects and other research activities in the UCD School of Veterinary Medicine, please see our Research & Postgraduate E-Zine.

Heifer rearing represents 20% of ongoing costs in the dairy herd, with Teagasc estimates suggesting that the cost of rearing a heifer is over €1500 per heifer. However, work from the UK suggests that 15% of dairy heifer calves alive at birth don’t make it into first lactation (Brickell and Wathes, 2011). Although advances have been made with the success of the Animal Health Ireland Calf Care group, large numbers of calves still die every year on Irish dairy farms (AIM Bovine Statistics Report, DAFM 2017). Several knowledge gaps exist in the area of calf health, that are currently being addressed through research conducted within the Section of Herd Health and Animal Husbandry at UCD School of Veterinary Medicine.

Recent international work has demonstrated that bacterial counts in colostrum may interfere with the absorption of immunoglobulin (Gelsinger et al., 2015), as well as being a potential vehicle for pathogenic organisms such as MAP (McAloon et al., 2018). In a study evaluating the levels of bacterial contamination in colostrum from Irish dairy herds, McAloon et al. (2016) demonstrated that 56% of colostrum samples collected on commercial dairy farms were above the standard Total Bacterial Count (TBC) and/or Total Coliform Count (TCC) limits used for commercial milk. This was higher than comparable estimates from Canadian dairy herds of 36% (Fecteau et al., 2002).

On colostrum quality, Donlon et al. (UCD Veterinary Graduate 2018) showed that 39% of colostrum samples collected on commercial farms were of sub-optimal quality; time from calving to collection of colostrum had the largest effect on the quality of colostrum. Statistical modelling and calculation of the Population Attributable Fraction demonstrated that if all samples were collected within 2 hrs of calving, the proportion of poor quality samples could be reduced by 61%.

Hayes et al. (2018, UCD Resident in Bovine Health Management) collected detailed weight measurements from calves across seven commercial dairy farms with long term follow up into the lactating herd. Accelerated failure time modelling showed that for heifers 443 days of age at Mating Start Date, heifers which grew at 0.4 kg/day had 16 more days open compared with a heifer that grew at 0.9kg/day before conceiving. Further work in collaboration with Teagasc Moorepark, is under way to investigate the biosecurity implications associated with contract heifer rearing.

Data from the DAFM/AFBI all island disease surveillance report suggests that pneumonia is diagnosed as the cause of death in 30-50% of calves less than 5 months of age submitted for post-mortem examination. The specific environmental factors predisposing calves to pneumonia is an area with little scientific research which is currently a high priority area for UCD Herd Health Group and an area of active research. Fitzgerald et al. (UCD Veterinary Student – MVB V, 2018), demonstrated that when compared with control herds, the airborne bacteria count in 10 pneumonia problem herds was greater across all sampling points in the calf shed (Figure 1). Further work planned for 2019 and 2020 will investigate the impact of the environment on the development of calf pneumonia using advanced, state of the art detection and sampling methods.

This piece appeared in the January edition of the Veterinary Ireland Journal and is part on an ongoing series of features on research in the UCD School of Veterinary Medicine.  Dr Conor McAloon is an assistant professor in our Herd Health & Animal Husbandry Section.

Further description of bovine tuberculosis trends in the United Kingdom and the Republic of Ireland, 2003–2015 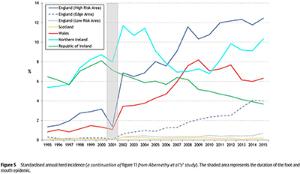 This project is the result of a major collaborative project between the UCD Centre for Veterinary Epidemiology and Risk Analysis (UCD CVERA) and agencies in England, Northern Ireland, Scotland, The Republic of Ireland and Wales. The paper which follows on from earlier work, describes trends in bovine tuberculosis (bTB) from 2003 to 2015 for the countries of the UK and the Republic of Ireland using standardised definitions and measures. Based on measures of animal and herd incidence, there remains a stable situation of extremely low prevalence in Scotland and the Low Risk Area of England, and a higher but ongoing reduction in prevalence in the Republic of Ireland. In Northern Ireland, there has been a rising bTB trend during 2010–2015, although not to levels experienced during 2002–2004. In the High Risk Area and Edge Area of England during 2010–2015, the rising bTB trends have continued but with some recent evidence of stabilisation.

The paper considers country-level differences in the light of key policy changes, which are presented in detail. This work is unique, and will assist policymakers when critically evaluating policy options for effective control and eradication. Ongoing updates of this analysis would be useful, providing an evidence base for country-level comparison of bTB trends into the future. The use of multivariable analytical methods should be considered, but will rely on substantial sharing of raw data across the five countries.