Join us for what promises to be a truly memorable night on Friday 19 July for our UCD Veterinary Sporting Greats / Laochra Spóirt Scoil Tréidliachta UCD event.  This is the perfect opportunity to catch up with classmates and colleagues, share memories and help the UCD Veterinary Community honour its sporting greats. 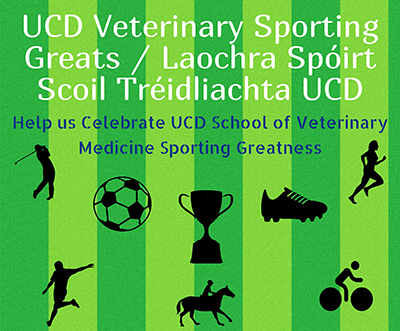 The Dean, Professor Michael Doherty, will host dinner in the UCD Astra Hall, which will be followed by a panel discussion with some of our most high profile sporting greats.  The panel discussion will be hosted by RTE’s Evanne Ní Chuilinn, and will include Brian Dooher, Ger Kelly, Susie Mitchell, Derek McGrath, Shane McGuckin, Fiona O’Brien, Dermot Weld and Sue Rackard (representing Nicky Rackard).  We’ll have lots of special guests on the night and we’ll also induct all of our sporting heroes into the UCD Veterinary Community Sporting Hall of Fame.

Tickets cost €60 and can be booked through http://www.ucd.ie/vetmed/about/sportsevent/

For further information on this event, please contact vetsportinggreats@ucd.ie

Ger Kelly: played football for Clare, on the team that won the Munster Championship in 1992.

Derek McGrath: Irish Rugby international, member of the 1987 World Cup squad. Chief Executive of European Rugby Cup from 2000 to 2014 and currently CEO of the Curragh.

Fiona O’Brien: Irish Women’s Rugby, has played for Ireland, Leinster and Old Belvedere, where she is currently captain.

Nicky Rackard (represented by his niece, Sue Rackard): top championship goal-scorer of all time (59 goals), widely regarded as one of the greatest hurlers ever.  Won four Leinster titles and two All Irelands with Wexford.