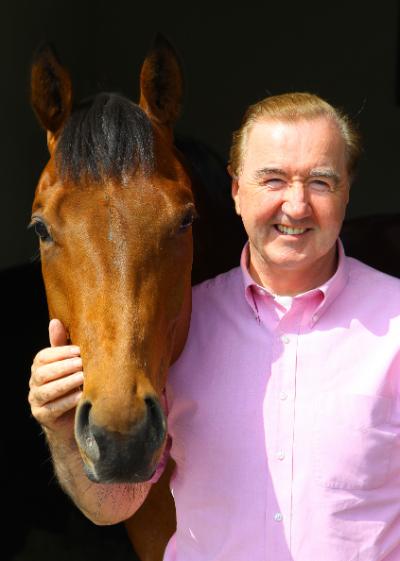 Dermot Weld is one of Ireland’s leading racehorse trainers. He graduated from the UCD School of Veterinary Medicine in 1970 and subsequently took over the running of Rosewell House Stables from his father, Charlie in 1972.

A successful amateur rider, he was Ireland’s Champion Amateur on three occasions. He also rode winners in America, France and South Africa as well as winning the Moet and Chandon Amateur Derby in Epsom.

To date, Dermot has trained over four thousand winners globally including the Epsom Derby, Melbourne Cup, Belmont Stakes, English 2000 Guineas, Irish Grand National and the Ascot Gold Cup. He has won all five of the Irish Classics and twenty five European Classics in total. He has trained winners at the Cheltenham Festival, Royal Ascot and the Breeder’s Cup. Dermot has been crowned the Champion Trainer of Ireland on nine occasions.

Dermot also bred Ghaiyaath who in 2020, had the distinction of being rated as the best racehorse in the world and named Cartier Horse of the Year.

In 1993, the Prime Minister of Australia honoured him with the Key to the City of Melbourne and in 2001, Dermot received the Charter Day Medal from his alma mater.